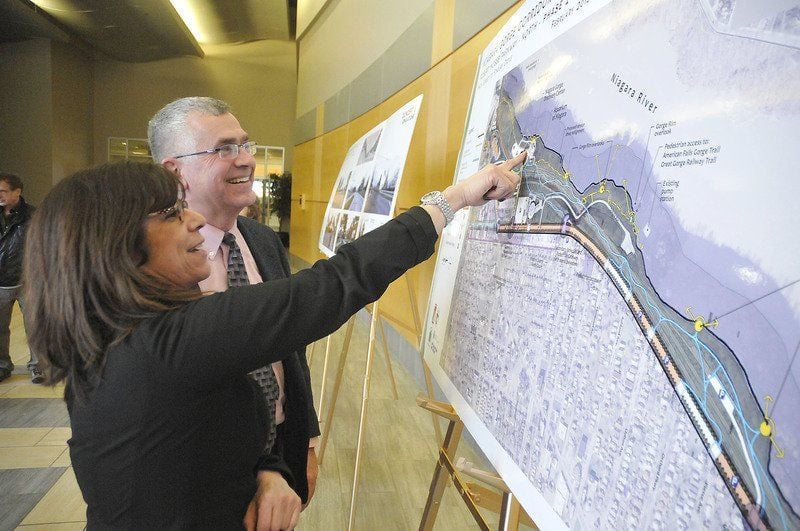 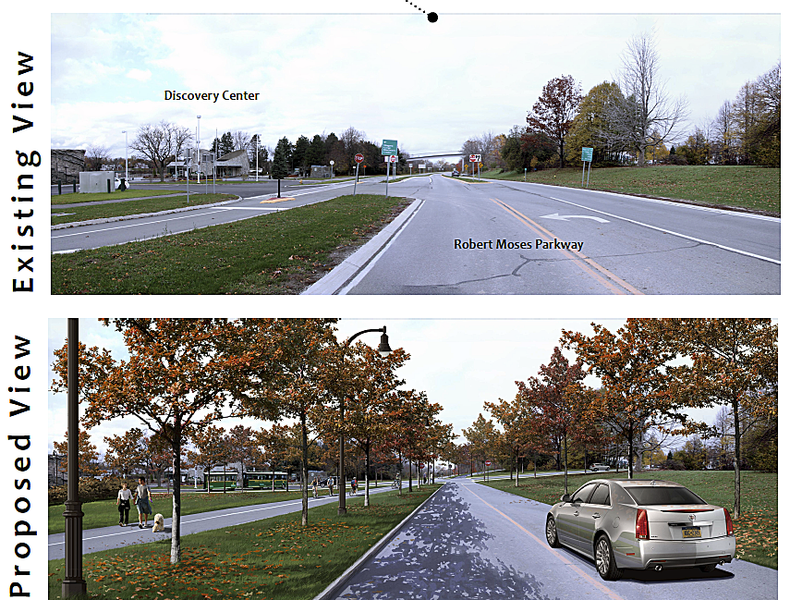 Contributed imageAn artist’s rendering of before and after shots of the entrance drive from Main Street to the Discovery Center and the Aquarium of Niagara.

Contributed imageAn artist’s rendering of before and after shots of the entrance drive from Main Street to the Discovery Center and the Aquarium of Niagara.

State officials are gathering comments from the public on design plans for the removal of a section of the Robert Moses Parkway.

Representatives from stakeholder agencies held a public information session Thursday and took comments from those in attendance on several options for the parkway removal project, including the configuration of vehicular entranceways to parking lots and access roads.

Paul Tronolone, a senior project manager for USA Niagara Development Corp., the state’s local economic development office and one of the stakeholders in the project, said public comments will be used to drive decisions about the direction the state will go in the next phase of the design work.

“We’re moving out of the sketch phase, where we had just lines on a map, to more detailed drawings,” Tronolone said during the first of two presentations at the five-hour session.

As proposed the project would involve the demolition and removal of the four lane expressway from Main Street to Findlay Drive to be replaced with a system of bicycle and pedestrian paths, overlooks and green space.

Only two of those lanes are currently open to vehicular traffic. The other two were reserved for bicycles and pedestrians as part of a pilot project that began in 2000.

A timeline provided as part of the presentation suggests that construction on the project would start in 2018 if all the state and federal requirements are met and funding for the project is secured.

Members of the public are able to view the materials from the information session on the state parks website under the public documents tab and can submit comments by email or mail through the end of March.

Dave Young, a DeVeaux neighborhood resident, said he was encouraged by what he saw in the renderings presented at the information session. He said he and his wife use the current bicycle and pedestrian path, but would like to be able to access the gorge more easily.

“Right now it’s kind of difficult to get to,” Young said.

Young said the only thing that was disappointing in the presentation was the timeline.

Bob Baxter is the conservation chair of the Niagara Heritage Partnership, a group that supports complete removal of the parkway. He has fought for the cause for well over a decade.

Baxter has been critical of the state agencies involved over the years on a number of points — inaction, their handling of the process — and continues to be disappointed by the partial removal plans, viewing them as insufficient, arguing that the removal needs to go all the way to the city line near Devil’s Hole State Park to maximize the potential of the area.

His vision of the gorge rim has long been as an ecological sanctuary, with a return to an old growth forest that would enhance the already robust wildlife and could act as an economic engine as a major destination for ecotourists.

“I look forward to the time when one the entities involved spends the necessary time to investigate the potential for regional ecotourism and designs the absence of the gorge parkway to support that position,” he said.

However, Baxter said that he views partial removal as a sign of progress, noting that for four state agencies to come to an agreement on anything in the Niagara region is a rare occurrence.

“I’m not happy about it, totally,” Baxter said. “But when am I happy about anything, totally?”

Christopher Schoepflin, the president of USA Niagara, said that after years of talking about parkway removal it is finally becoming a reality, pointing to the parkway reconfiguration project underway on a mile-long section of the road south of Niagara Falls State Park.

“We have a world-class waterfront here in Niagara Falls that has been disjointed and disconnected from the community for all of our lifetimes,” Schoepflin said.

Schoepflin said the proposed project on the north part of the parkway presents an opportunity to continue that progress, something that could be carried over to other sections of the road in the future.

“Nothing that happens here prohibits that work from continuing,” Schoepflin said. “I think that’s a very important distinction. That’s something we take very seriously.”

Patrick M. Ignatius, MD, of Grand Island. Husband of the late Susan (nee Tutuska) Ignatius. Father of Christopher (Kimberly) and Catherine Ignatius. Grandfather of Ella and Harrison Ignatius. Predeceased by 5 siblings. Dr. Ignatius was known to his colleagues, patients, friends and family as…