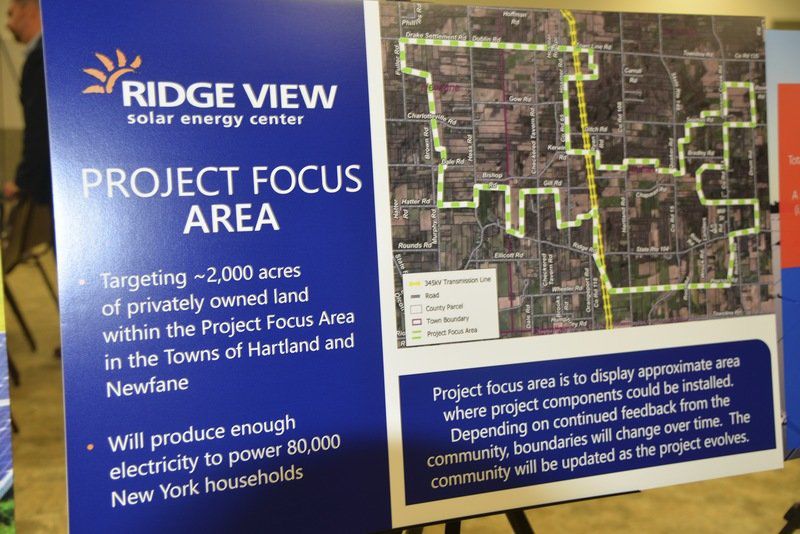 Connor Hoffman/staff The Ridge View Solar Energy Center, described in these informational posters which were on display during a public meeting about the project on Wednesday, would be located on land in the towns of Hartland and Newfane. 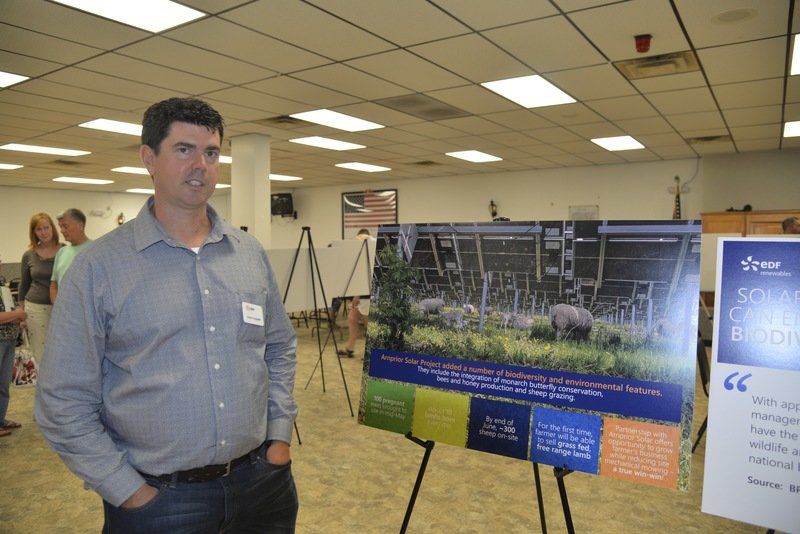 Connor Hoffman/staff The Ridge View Solar Energy Center, described in these informational posters which were on display during a public meeting about the project on Wednesday, would be located on land in the towns of Hartland and Newfane.

GASPORT — Hartland and Newfane residents were able to get more details about a proposed solar project during an open house held on Wednesday.

EDF Renewables is proposing the Ridge View Solar Energy Center, a 350 Megawatts solar project, that would take up 1500 acres in Hartland and 500 acres in Newfane.

Kevin Campbell, the development manager with EDF Renewables, said the company realizes is is asking for a lot of land, so it would like to integrate agriculture in some form with the solar facility, which he said might include the integration of bee hives and pollinators or sheep grazing. He added that the company has done this before with smaller projects.

Campbell explained they would like to build the facility in Hartland and Newfane for three main reasons. One reason is that it is close to a grid that has the capacity to take the electricity that would be generated. There is the 345 KV line in Somerset that runs through the Town of Hartland.

The second reason is they need open land to place the panel.

The third reason is they need a community open to citing a facility like they are proposing, and the town governments of Hartland and Newfane have allowed them to pursue the opportunity with local property owners.

Campbell said his company would like to start construction by 2023 and have the project operational by the end of 2024. The facility would employ five full-time employees.

Campbell said the project could bring in about $1 million in new revenue to the towns, county and school district in the form of a payment-in-lieu-of-taxes and host community agreements. The company is also applying for a renewable energy credit with the New York State Energy and Development Authority.

The power would be created and used where the demand is, which Campbell observed, would "likely head to a direction in New York City."

Attendees of the open house expressed an openness to the project.

Don and Hannah Bucholz, a Hartland couple that would have some of the panels on their property, expressed support for the project.

"I think it's an opportunity for us to put our money where our mouth is," Hannah Bucholz said.

David Hill, a Hartland resident, said he thinks the project would be "very beneficial for the town."

"It's going to create revenue that we could in no other way bring in this town, which, in turn, is just going to make it a better community. We're going to be financially stronger and more stable," Hill said.

This is not the first large-scale solar project being proposed in the area. Bear Ridge Solar Project, which, if completed, would encompass 750 acres in Cambria and 250 acres in Pendleton, is also in the works. That project would create 100MW of energy.

Both the Cambria town board and Pendleton town board have approved resolutions formally opposing the Bear Ridge Solar Project for not following local zoning ordinances. There has also been a group of citizens formed against the project called Cambria Opposition to Industrial Solar.

Article 10 of the New York State Public Service Law puts an appointed board in charge of siting review and permitting of major electric generating facilities, which are 25 MW or more. As part of the process, they have to consult with the public first.