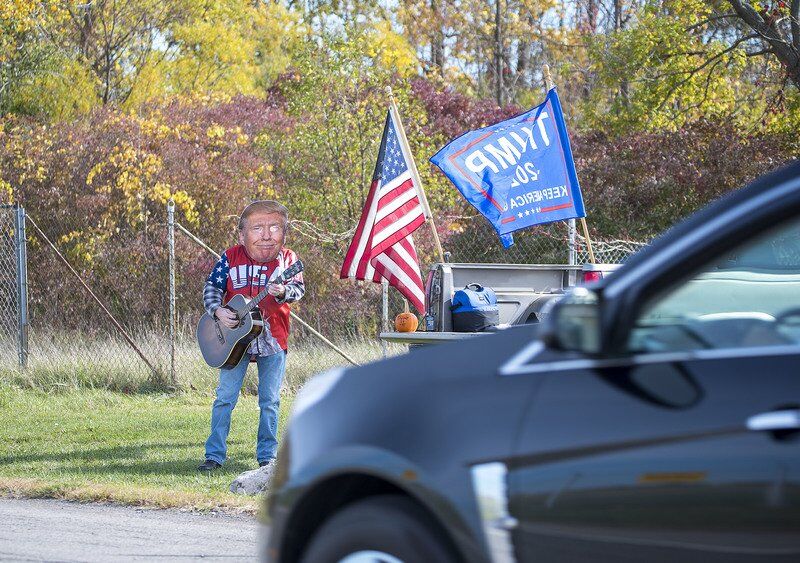 Vincent Crampton has been dressing up as Donald Trump and singing his praise to passing traffic on Porter Road. 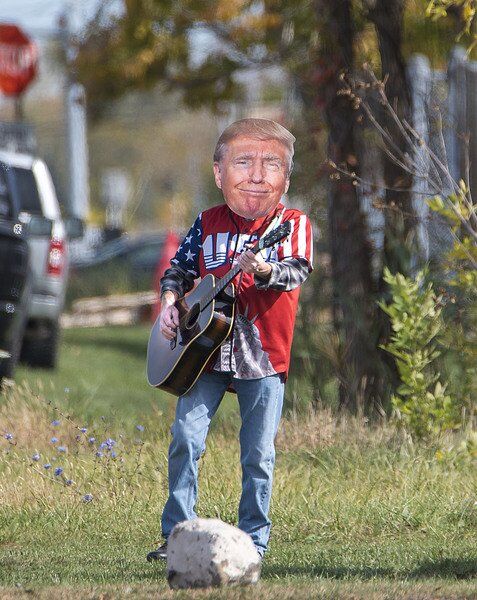 Vincent Crampton put on his oversized Donald Trump mask and spent some time out on Porter Road in Niagara Falls this week where he spent several hours singing the president's praises. 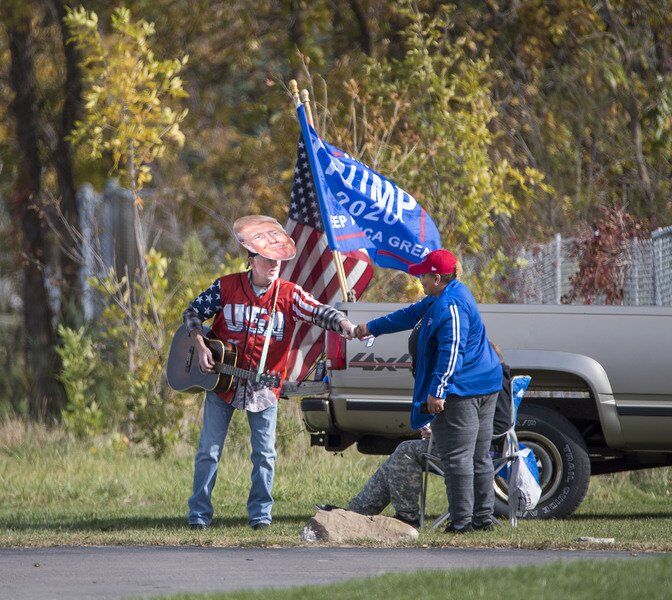 Vincent Crampton has been dressing up as Donald Trump and singing his praise to passing traffic on Porter Road.

Vincent Crampton put on his oversized Donald Trump mask and spent some time out on Porter Road in Niagara Falls this week where he spent several hours singing the president's praises.

Vince Crampton admits he saw a half dozen or so "one-finger salutes" while he was playing his guitar outside on Porter Road this week.

In today's politically charged environment, the 55-year-old factory worker and U.S. Marine wasn't surprised by the reaction some people have to him standing in public while wearing an oversized mask of President Donald Trump.

On balance, Crampton said, most people who passed him while he was performing were supportive.

"It was a pretty good day," he said on Thursday. "I had a lot of honks. A lot of people were honking and stopping to take pictures."

It was nearly four years ago to the day when Crampton first donned a Donald Trump mask and performed a one-man concert outside the Almer Apartments on Porter Road. At the time, Crampton was stumping for Trump in his race against Democratic challenger Hillary Clinton. In the run-up to the 2016 presidential election, Crampton said he felt like a victory for Clinton would spell doom for the nation while predicting a win for Trump would "Save America."

With Election Day 2020 fast approaching and his preferred candidate now seeking a second term, Crampton still believes Trump is the right person to help "Make America Great Again." He credits a series of what he views as unfortunate circumstances with hampering Trump during his first four years in office.

"It's plain to see where we are at right now, but he could have accomplished much greater things if not for the adversity that he faced," Crampton said.

Crampton's list of Trump "attacks" includes what he views as a fraudulent Russia probe and, more recently, the challenge of our lifetime — COVID-19.

While Trump has faced heavy criticism for his administration's handling of the virus, Crampton believes the president did the best he could under extremely challenging circumstances, noting that COVID-19 was an unknown to everyone when the year started and is still proving to be difficult to get under control.

Had it not been for the global pandemic, Crampton, a former Democrat who is now a registered Independent, believes Trump would be sailing to reelection based largely on what is often viewed as his strongest achievement in office — a thriving U.S. economy.

"Personally, I don't know anybody that could have done one bit better unless they were tipped off that this thing was going to escape from China," Crampton said. "It's a really tough situation. He's doing the best job that he can."

Crampton considers Democratic challenger Joe Biden to be "part of the swamp" in Washington, D.C. and he's concerned a victory for him will allow what he described as "Leftist" ideology to take hold across the nation. One of his main concerns about government led by Democrats is their push to allow criminals to be turned loose without any bail.

Regardless of the outcome of the presidential election, Crampton said he's concerned about the future. He said he was more concerned this year than he was four years ago about being targeted with threats or even physical violence when he displayed his Trump mask in public.

"Everyone has the right to express who they are supporting," Crampton said. "I'm not afraid of it. I'm a United States Marine. I will not back down from what I think is right."

With COVID, economic problems and general unrest seeming more common these days, Crampton note that America is facing some serious challenges in the next few years, regardless of who is serving as president.

"I'm afraid for our country and the direction it's heading, either way," he said. "Should Trump win or lose, doesn't matter. I think this country is in for a rude awakening.

"Trump is my only hope," he added. "I don't know what comes after that."

Crampton said he believes what the country needs now as much as ever is more kindness, less friction and a willingness for Americans of all backgrounds to treat one another with respect, regardless of political affiliations or beliefs.