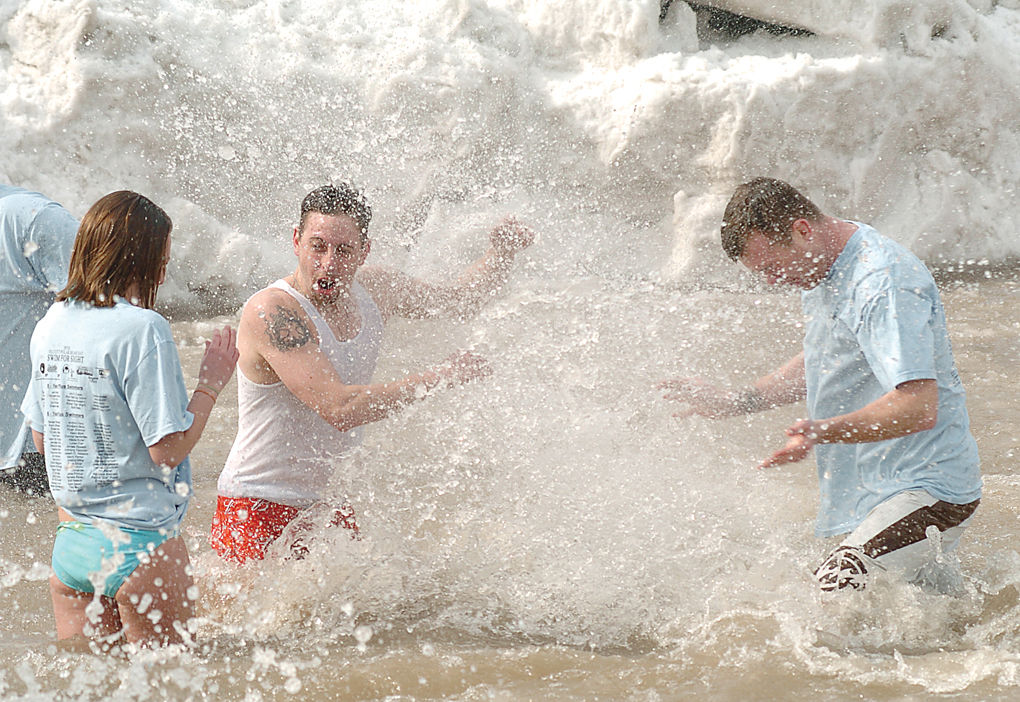 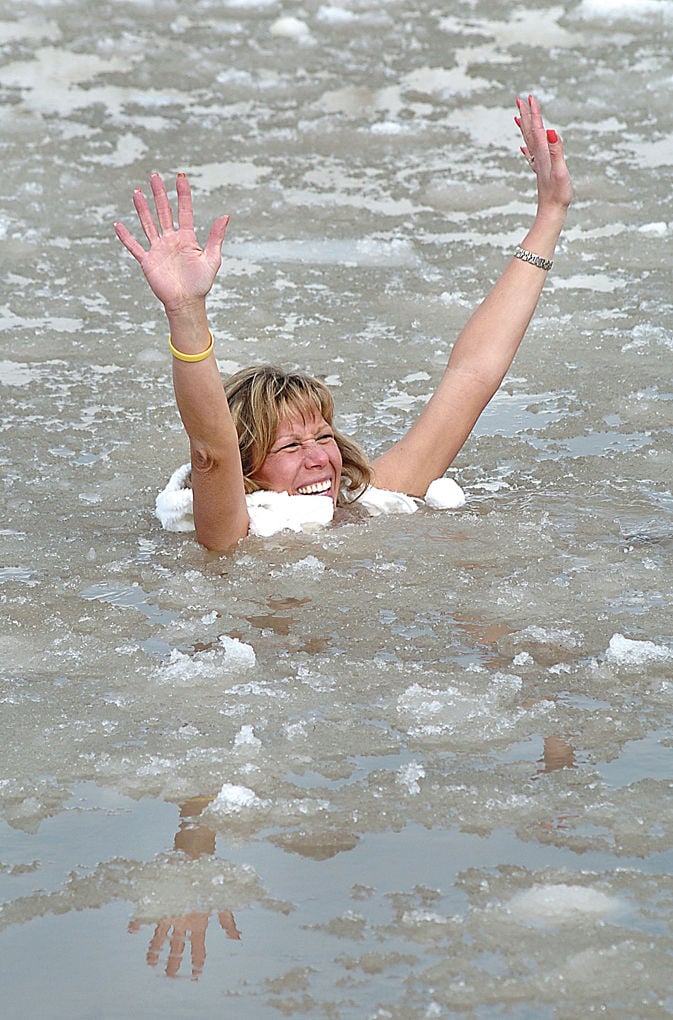 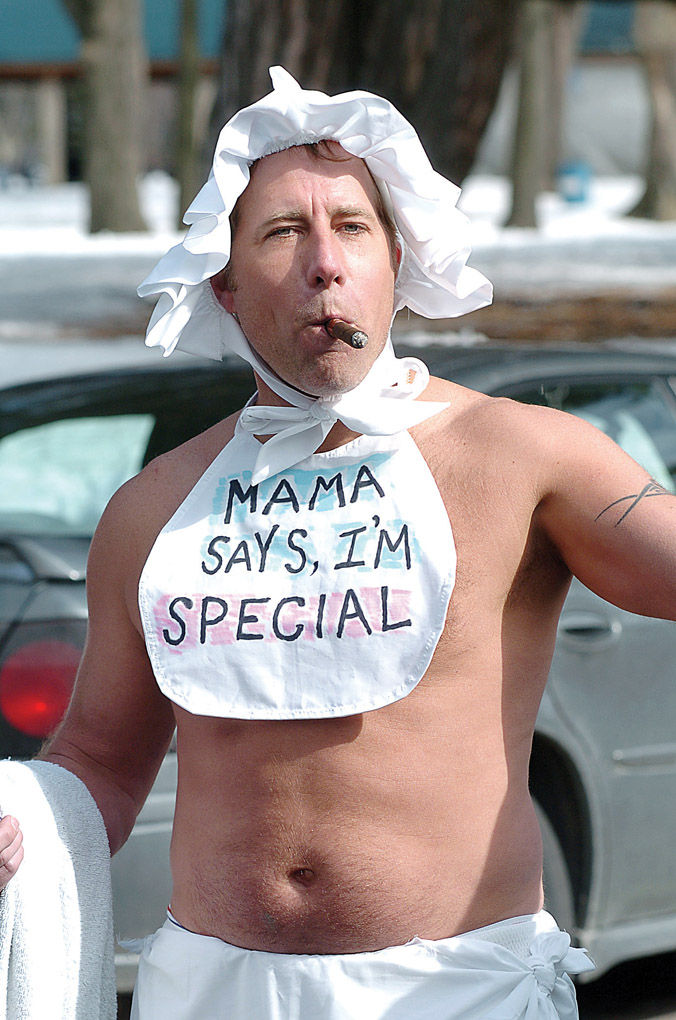 080302 polar swim3/ lkpt DAN CAPPELLAZZO/STAFF PHOTOGRAPHER Olcott - Calling himself Mr. Wonderful, of Lockport, he shows fellow Polar Bears and spectators Olcott Beach how his mom feels about him before he is about to brave Lake Ontario� 34 degree temperatures at Olcott Beach for the 39th Annual Polar Bear Swim. 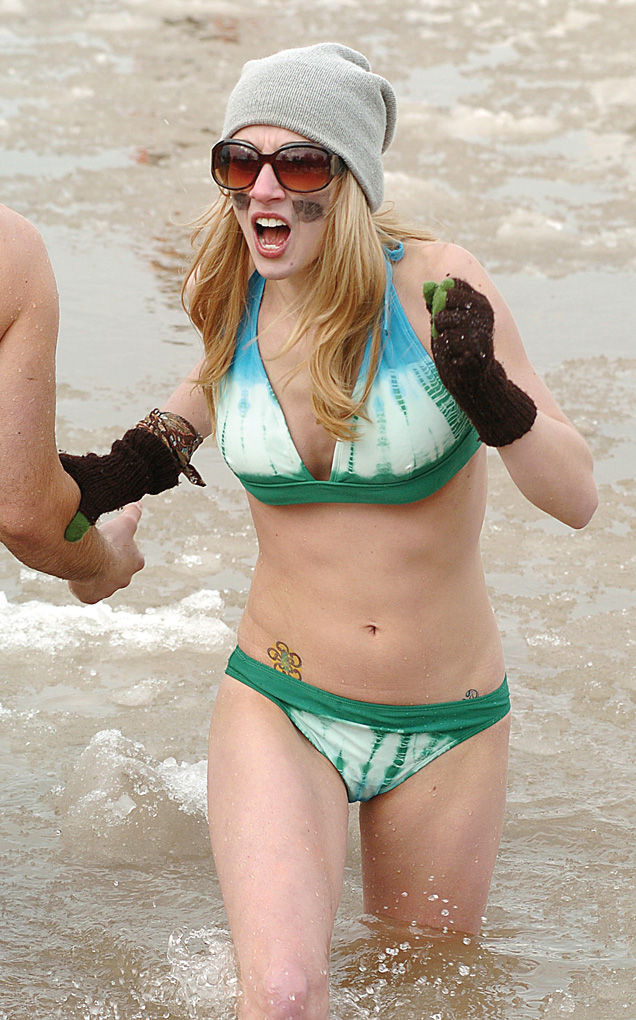 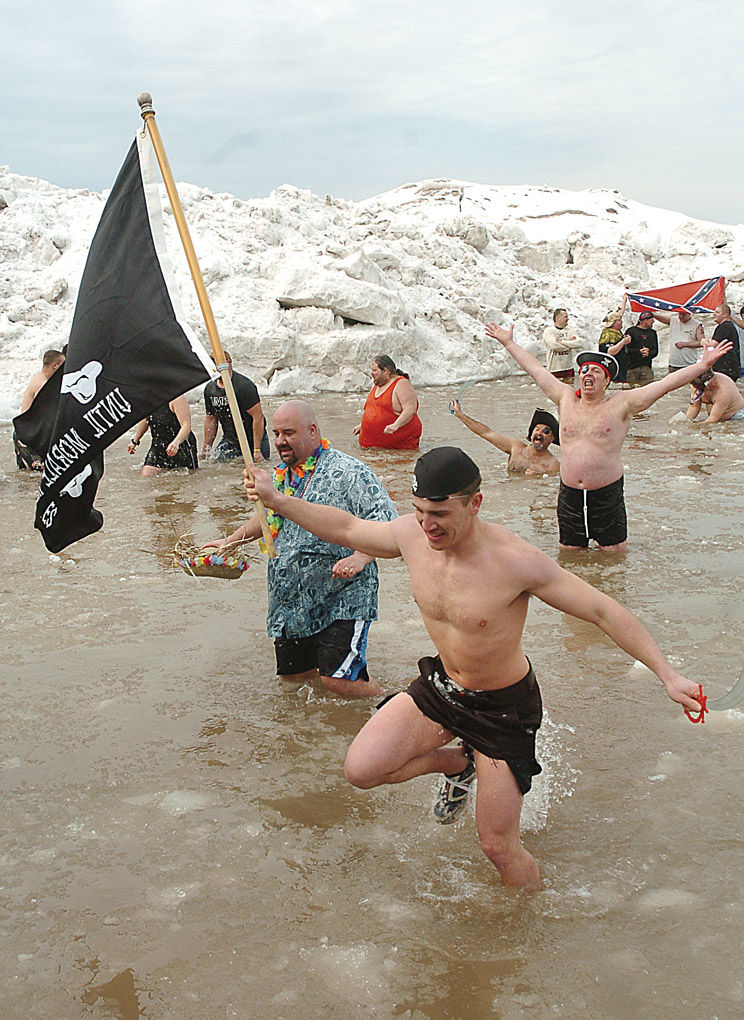 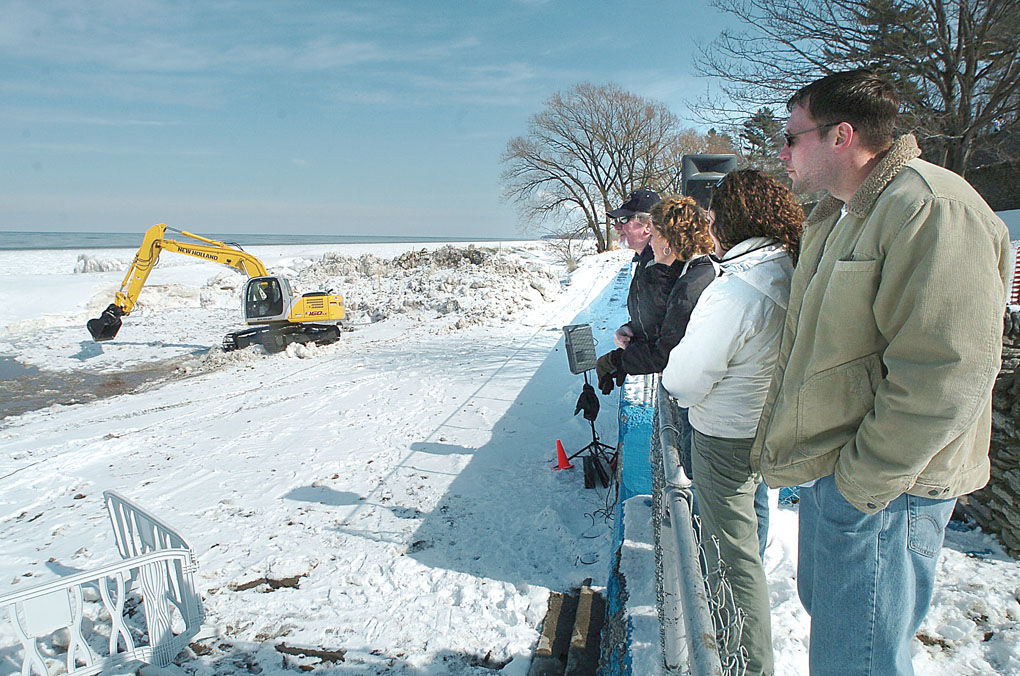 080302 polar swim3/ lkpt DAN CAPPELLAZZO/STAFF PHOTOGRAPHER Olcott - Calling himself Mr. Wonderful, of Lockport, he shows fellow Polar Bears and spectators Olcott Beach how his mom feels about him before he is about to brave Lake Ontario� 34 degree temperatures at Olcott Beach for the 39th Annual Polar Bear Swim.

OLCOTT — A tail-gate partier threw a chunk of snow at a grizzled Harley-Davidson rider, a candidate for Polar Queen offered Jello shots for a vote, a man wore a duck on his head, a teen wore an escaped convict orange jailbird suit while his little sister dressed as a green leprechaun. It was part of the nuttiness of the 39th annual Polar Bear Swim for Sight on Sunday where about 600 people took a plunge into a carved out portion of icy Lake Ontario. There was a serious side, however. A handful of Wilson High School students swam in memory of Tim Kelahan who was killed in an automobile accident on Tuesday. “RIP Tim” was painted on their backs. “He’s a friend of almost everybody in the school,” said Rachel Ripley, 17. “It was in honor of Tim. Other juniors and seniors from Wilson went in. We had Wilson on our bellies. We all have RIP Tim on our backs and have posters.” It was the sixth time Ripley took part in the Polar Bear Swim which is sponsored by the Olcott Lions Club and billed as “The World’s Largest Swim for Sight.” The swim was a first for Bridget Beilein, 28, who was named Polar Bear Queen. “I did it in memory of my uncle, Bobby McDonough, who died this week,” the daughter of Niagara County Sheriff Tom Beilein said. The outgoing sheriff approved of his daughter’s participation. “He knows that you only live life once and it’s important to live it at the fullest at all times,” Bridget said. “I’m very proud to be from Olcott and representing my family.” There was lots of competition for regal honors and Rebecca Scherrer of Bergholz had a campaign manager. Tony Fiori, her fiancé, was confident he could buy any election. The sign on the van read, “Vote Rebecca, Polar Bear Queen; free jello shots.” It was the first political plunge for Rebecca. “Last year I was here and didn’t go in,” she confessed. “I took an oath to do it this year.” Lisa Baughman, 12, of Niagara Falls was a leprechaun, wearing a green party T-shirt. She took the dip last year. “It’s really nice to donate to people who have no eyesight,” she said. Big brother, Glenn Baughman, 15, a student at Niagara-Wheatfield, wore Bucky Phillips orange. “He’s the only one dressed as a prisoner,” said mom, Mary Baughman. Chris Heinz, 20, and Travis Guerriera, 17, of Newfane, wore togas and with green garnish wrapped around their heads to attract a bevy of young ladies. “I stole it from my mom. It’s a plant,” Travis said. “Don’t tell her.” Joel Grundy a native of Lockport who now lives in Olcott enjoyed chili, pizza and roast beef at the Olcott Methodist Church before watching the polar bears and enjoying a laugh. Grundy did not go in the lake. “I was a swimmer at the Geneseo did enough of water to last a life time,” he said. Grundy recalled a friend of his, Leo Smith, who was one of the first persons to take part in the swim. “They dug a hole in the ice in the harbor and they all jumped in at the same time,” Grundy recalled. “They got stuck in the hole. They couldn’t get out. The put their hands on the ice and slipped back into the hole. That was the first polar bear swim.” Smith, who lives in Wilson, took part the first two years. “The first year we went in the creek,” he said. “Getting out was kind of difficult. We got cut up and stuff. It was quite an experience. I’m not that rugged anymore ... I’m really impressed with how it’s grown.” Swimmers now pay $10 for the right to enter the water. Prior to the swim, they were cautioned, “There’s more ice in the water this year. It will cut you. Don’t dive.” Not everyone listened, especially the band of pirates. Dick Boyd, 89, of Wrights Corners, just came to town to enjoy the cooking of a former student, Ron Fulmer, at the Methodist Church. Boyd avoided the crowd at the beach. “It’s their thing,” the former construction worker and teacher said. “If they enjoy it, that’s fine. It’s not for me.” There were fundraisers for the Newfane girls lacrosse and boys club wrestling. Vendors sold touch lamps and Elvis paraphernalia. The Youngstown Lions sold sausage and chowder. Tom Nader of Tonawanda brought in a bus load of family and friends. “It’s such a rush,” he said. Contact reporter Bill Wolcott at 439-9222, Ext. 6246.