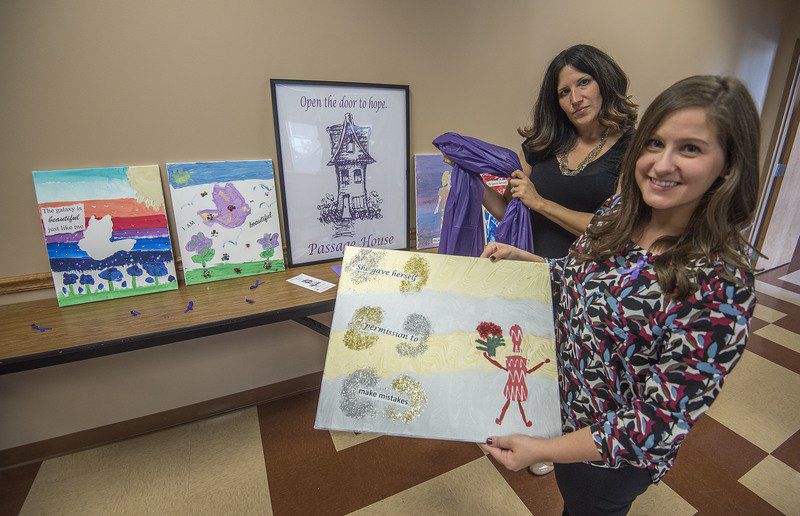 Passage House Director Larissa Bachman shows off artwork and Karrie Gebhardt, director of development and communications with Family & Children Services of Niagara holds a purple ribbon in preparation for the fourth annual Domestic Violence Ribbon Walk and Survivor Art Exhibit to be held in Niagara Falls. 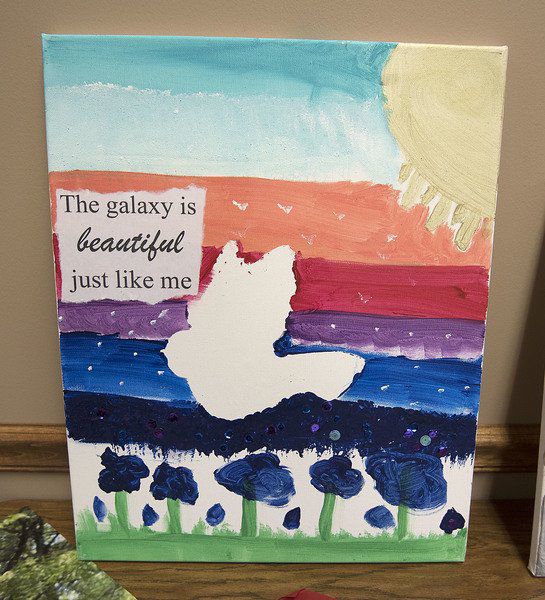 Passage House Director Larissa Bachman shows off artwork and Karrie Gebhardt, director of development and communications with Family & Children Services of Niagara holds a purple ribbon in preparation for the fourth annual Domestic Violence Ribbon Walk and Survivor Art Exhibit to be held in Niagara Falls.

In 1994 — a year that is among the most violent in recent local record – Niagara County saw 12 homicides.

Over half of the murders were found to be related to domestic violence, according to Susan LaRose, the DV coordinator for the Niagara County Sheriff's Office, which provides outreach and guidance to those who report such incidents.

LaRose said '94 was a year she and colleagues in other agencies advocating for similar causes began a coalition to help address the issue.

Dr. Dana Radatz, an assistant professor in Niagara University's Department of Criminology and Criminal Justice – another partner in the coalition – said she has worked in other states on the topic of domestic violence. The close relationships of Niagara's advocacy groups is "somewhat unique," she said.

"The response here is much more cohesive and agencies work collaboratively to address issues," Radatz said in a roundtable discussion with other stakeholders in the Domestic Violence Intervention Program last week.

Homicide statistics in Niagara County have leveled off since 1994, however concerning numbers are still present. Since 2006, the number of domestic violence reports in the county has ranged from 2,800 to 3,900. On average, about a third of the county's total reports come from the city of Niagara Falls.

"Now think of the ones that are unreported," LaRose said. "It could be double that."

Radatz called the county stats "simply overwhelming," adding that one in four women will experience domestic violence in their lifetime. The rates for men range from one in seven to one in 12, Radatz said.

"While we focus on lots of different types of violence is occurring, this one is occurring a lot more than people realize," she said.

Because of the estimated volume of undisclosed incidents, an uptick in reports gives negative as well as positive indications.

Larissa Bachman, the director of Family and Children Services of Niagara's Passage House – a domestic violence shelter in the Falls – said her office continues to receive increasing numbers of calls. The agency registered 504 crisis reports on its hotline in 2016. This year, the log has already reached 382.

In August, Bachman's agency received 62 calls, the most it has ever recorded in a 30-day period, she said.

The stakeholders attributed part of the broader increase to a growing awareness of domestic violence situations and the availability of resources to address them. Help for victims most often hinges on whether they are ready to report the abuse, the stakeholders said.

Even in instances where associates of a victim reach out, Bachman said Passage House asks to speak to the person suffering the abuse.

"We have to speak to the survivor themselves because we want to promote empowerment for those individuals," she said. "We would never want to make somebody do something when they’re not ready."

At the time of a report, the cohesiveness of the Domestic Violence Intervention Program becomes integral to the survivorship process.

In addition to the separation period being among the most dangerous for victims, there is no broad procedure that is applicable to domestic violence cases. Each situation and each approach is unique, Bachman said. The only primary goals are safety and holding the abuser accountable, she said.

"The individuals we serve usually have a slew of needs," Bachman said, adding that domestic violence survivors often need help navigating the criminal justice system, childcare services and beyond.

"If we don’t know how to do that, how can we expect a client or a survivor to be able to do that?" she said. "It’s like role modeling in a way, between all of us."

In education, the coalition must also confront misinformation that, at the least, makes finding help more difficult, and at the most can damage the journey to survivorship. The stakeholders offer various training exercises and presentations to address that and other domestic violence related issues in workplaces and other institutions.

Radatz said an important opportunity for support can come at the moment a victim reaches out, a crucial step on the individuals' escape from their situation.

"Language is powerful," she said "And if (someone) comes across as if they’re blaming the victim in anyway shape or form, that victim is not going to turn around and find someone to who can help them because they’re perception is, it’s their fault."

Anne Marie Tucker, the executive director of the Child Advocacy Center of Niagara, an affiliate of Niagara Falls Memorial Medical Center, is particularly passionate about another common misconception.

There is a link between domestic violence and child abuse within the home, but Tucker said exposure to such violence does not determine the life of a survivor.

"Sometimes it gets interpreted that there's this almost this direct correlation, that if person has experiences as a child, this is what they're going to do, or this is what's going to happen to them as an adult," Tucker said. "That's not the case."

Tucker said the body of research surrounding the issue, broadly speaking, has found significant populations experience a range of what is technically termed "adverse childhood experiences."

"I've had children tell our therapists ... 'Somebody told me I'm going to grow up to be a rapist because of this happened to me,' " she said. "We need to understand that's not what intergenerational issues of abuse and maltreatment look like."

Studies have found the exposure has negative physical and mental health affects, but there is no direct link between victims and future abuse, Tucker said. Research found that exposure to violence is correlated with a "higher vulnerability" for "a lot of negative things," she said.

Bachman said, like making a victim culpable in an ongoing abusive relationship, the incorrect view that victims become abusers can further isolate and hurt the person seeking help.

For the uninitiated, taking the delicate steps to assist an individual who may be in a dangerous relationship can be as overwhelming as the statistics. There is a way to simplify it, Radatz said.

"The biggest thing I tell everybody is, 'You don’t need to know everything about domestic violence, you just need to know where to send somebody to get more information,'" she said.

The Domestic Violence Intervention Program will be hosting a series of educational and awareness events throughout the month of October to further that mission.

• Fourth Annual Domestic Violence Ribbon Walk — 4:30 p.m. Tuesday to begin at the corner of Main and Third streets and conclude at Wine On Third.

Lending a hand to Passage House

In an effort to assist Family & Children's Services of Niagara's Passage House shelter, the Leadership Niagara class of 2017 is spearheadi…