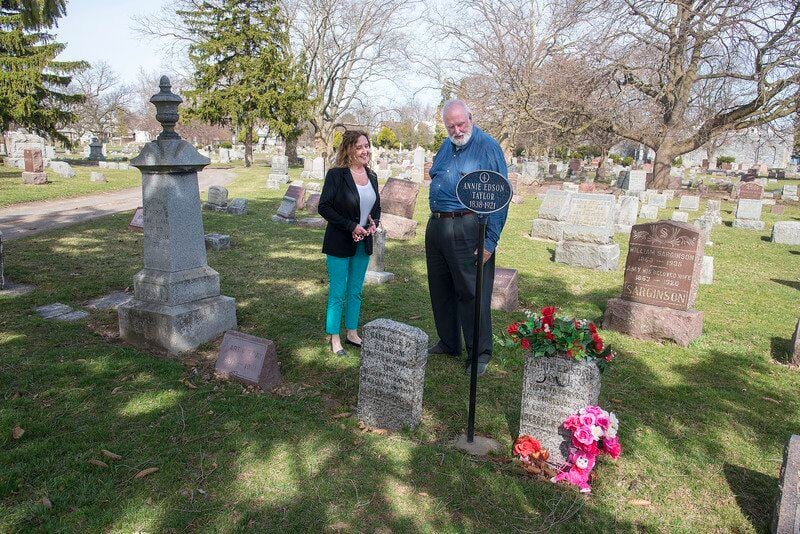 Judy Glaser and Tim Baxter, director of operations at Oakwood Cemetery, talk about several Niagara Falls stunters laid to rest at the cemetery, including Annie Edson Taylor, the first woman to go over Niagara Falls in a barrel. 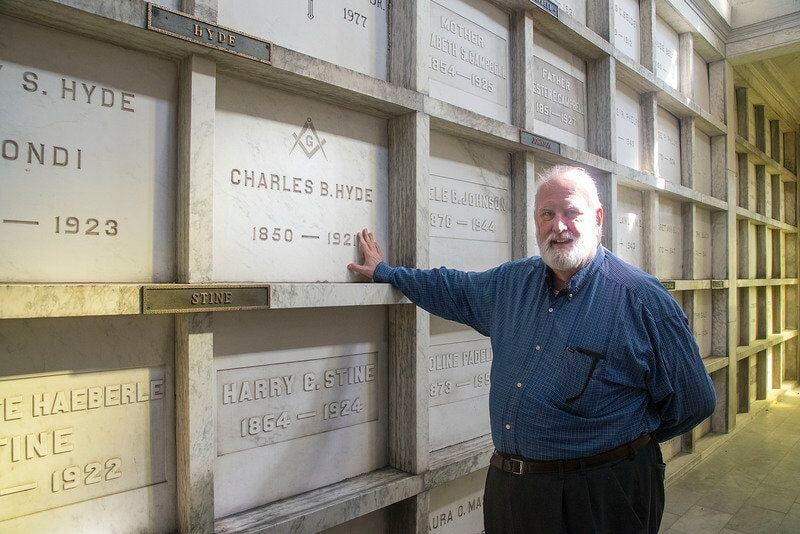 Tim Baxter, director of operations at Oakwood Cemetery, stands next to the grave of Charles B. Hyde, the namesake of Hyde Park. 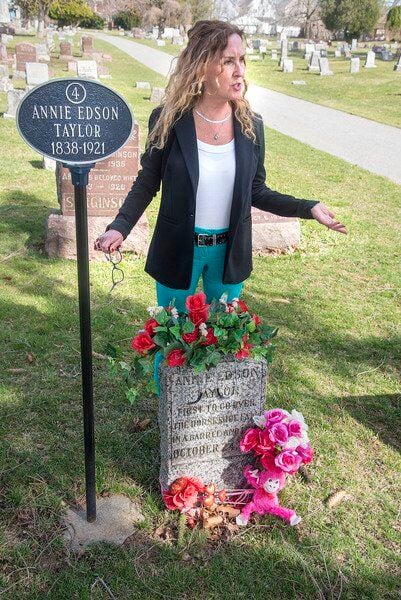 Judy Glaser talks about Annie Edson Taylor, the first woman to go over Niagara Falls in a barrel, who now rests at Oakwood Cemetery. 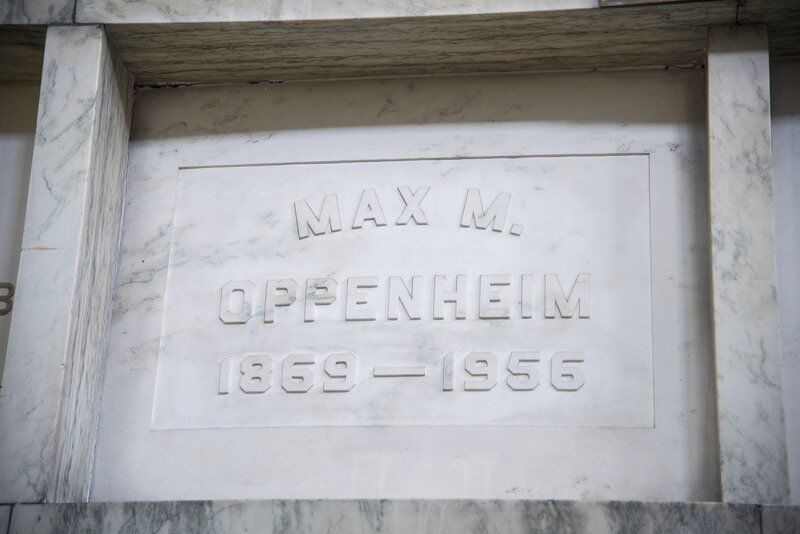 The grave of Max M. Oppenheim at Oakwood Cemetery, for whom Oppenheim Park was named after.

Judy Glaser and Tim Baxter, director of operations at Oakwood Cemetery, talk about several Niagara Falls stunters laid to rest at the cemetery, including Annie Edson Taylor, the first woman to go over Niagara Falls in a barrel.

Tim Baxter, director of operations at Oakwood Cemetery, stands next to the grave of Charles B. Hyde, the namesake of Hyde Park.

Judy Glaser talks about Annie Edson Taylor, the first woman to go over Niagara Falls in a barrel, who now rests at Oakwood Cemetery.

The grave of Max M. Oppenheim at Oakwood Cemetery, for whom Oppenheim Park was named after.

For many people, graveyards are dead places – but take a walk through Oakwood Cemetery with someone who knows and the residents come to life.

The 18½-acre cemetery was founded in 1852, according to Operations Director Tim Baxter. The former crematory (built as a chapel), office, and mausoleum are on the National Registry of Historic Places.

There are great stories buried at every turn, Judie Glaser, secretary said while leading a tour. She will be telling one per month in the Gazette focusing on a unique individual.

“Part of our goal,” she said, “is to get people to come in here and enjoy it.”

While anyone can have an appreciation of the tranquil natural environment, it’s the stories at Oakwood that make a difference.

“Joel Robinson piloted one of the Maids of the Mist through the rapids,” Baxter said. “He never went in a boat again. There was nothing he was doing to control the boat. It was all up to the whim of god.”

Then there is the story of William Ellis who came to Niagara and found work on the suspension bridge. Four laborers became stranded in a windstorm, perilously dangling over the raging torrent. Ellis volunteered for the rescue and all four workers were carried to safety together in a basket even though he'd been asked to take them singly.

The mausoleum, designed by famed architect E.B. Green, even has a Louis Comfort Tiffany stained glass window in the Schoellkopf family crypt.

“It could be 50 degrees outside and it’s still colder inside than out,” Baxter explained.

Within as well are the memories of leaders of Falls society.

For example, Harry Stine pitched one game in 1890 for the Philadelphia Athletics. Then he became a pharmacist and one of the first retailers to sell franchises in a business.

Across the way from Stine is the well-remembered Charles B. Hyde. Yes, that Hyde, from the park.

Baxter said back when George Haeberle (of plaza fame) was president, the cemetery was doing so well it even loaned money to people looking for mortgages.

The mausoleum also serves as the resting place for the Silberberg Family. Silberberg’s sold clothing for men and boys. A lucky few still own one of their wooden hangers. The Silberbergs hosted Temple Beth El upstairs at their store before moving to Ashland Ave.

No story about Oakwood Cemetery is complete without daredevil tales. Sure there’s Annie Edson Taylor, first over the falls in a barrel, but there are many more as well.

For example, Capt. Matthew Webb was the first man to swim the English Channel.

“He said he was going to swim the rapids and the whirlpool. Everybody told him he was going to die. He didn’t listen” Glaser said, while gesturing at his grave. “Here he is.”

Then there was Francis Abbott, the hermit of Niagara Falls.

“He kept to himself,” Glaser said. “He lived on Goat Island until one day he bathed a little longer than anticipated. He ended up in Lewiston.”

Maud Willard had some sort of relationship with a strong swimmer and barrel rider named Carlisle Graham. The plan was for her to ride his barrel through Rapids and the Whirlpool while Graham swam.

Graham made it to Lewiston and had a beer when he looked back and wondered where his friend was. She was stuck in the spincycle. Graham fished out the barrel. It had been five or six hours. Her precious dog, keeping her company in the barrel, had plugged the only breathing hole. She suffocated.

Somehow, it always it comes back to Annie Edson Taylor. She completed her stunt on her 63rd birthday. Her public relations agent, rather than taking her on a tour to sign autographs picked a younger, buxom lass with whom to hit the road.

Taylor ended up destitute and only came to her final rest when a benefactor cared.

The people buried in Oakwood Cemetery are as varied and unique as Niagara Falls itself.

On the third Friday monthly, Judie Glaser, secretary of the cemetery, will be writing a column for the Gazette focusing on one historically significant resident.

Sometimes that will profile will be a famous daredevil.

Look for the first installment next Friday, April 16.

Others, it will be a business or political leader.