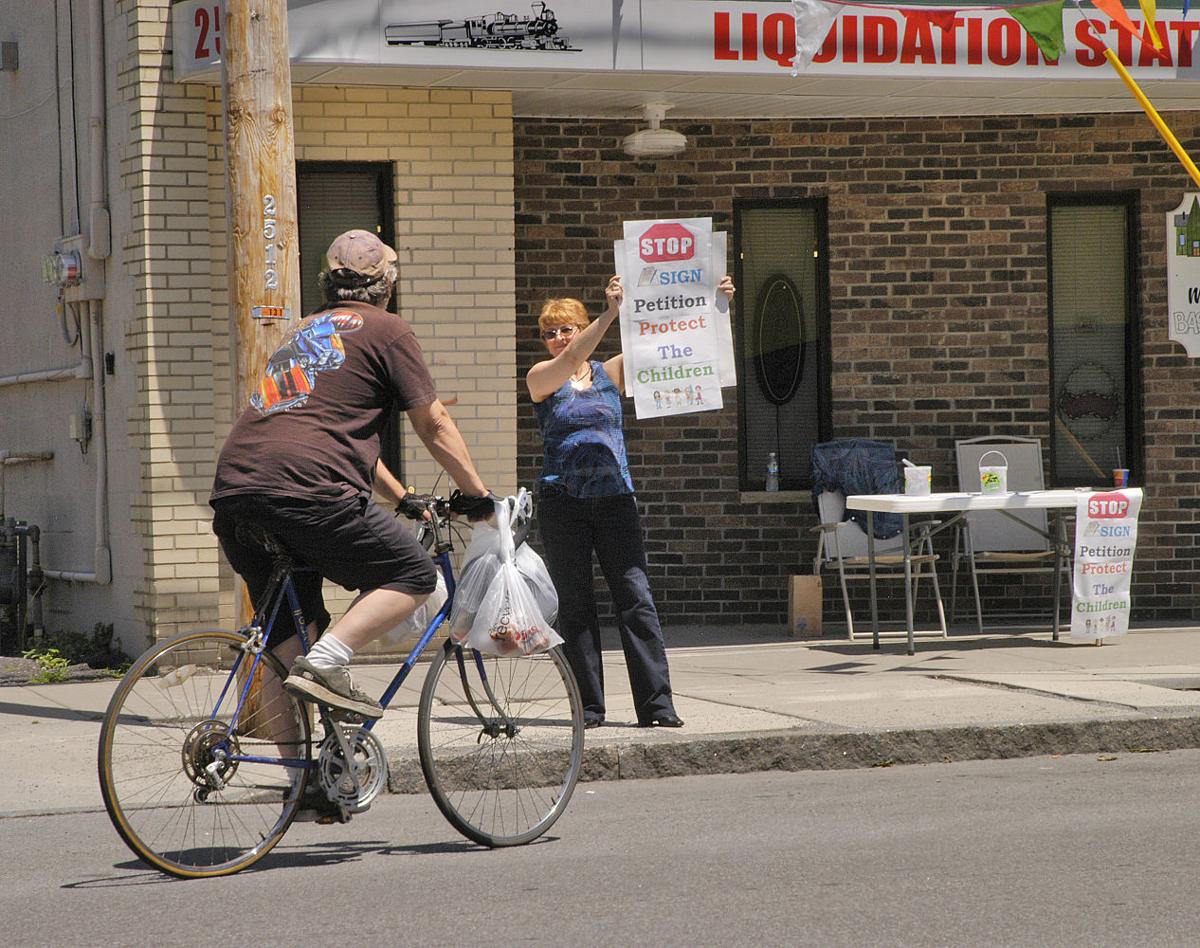 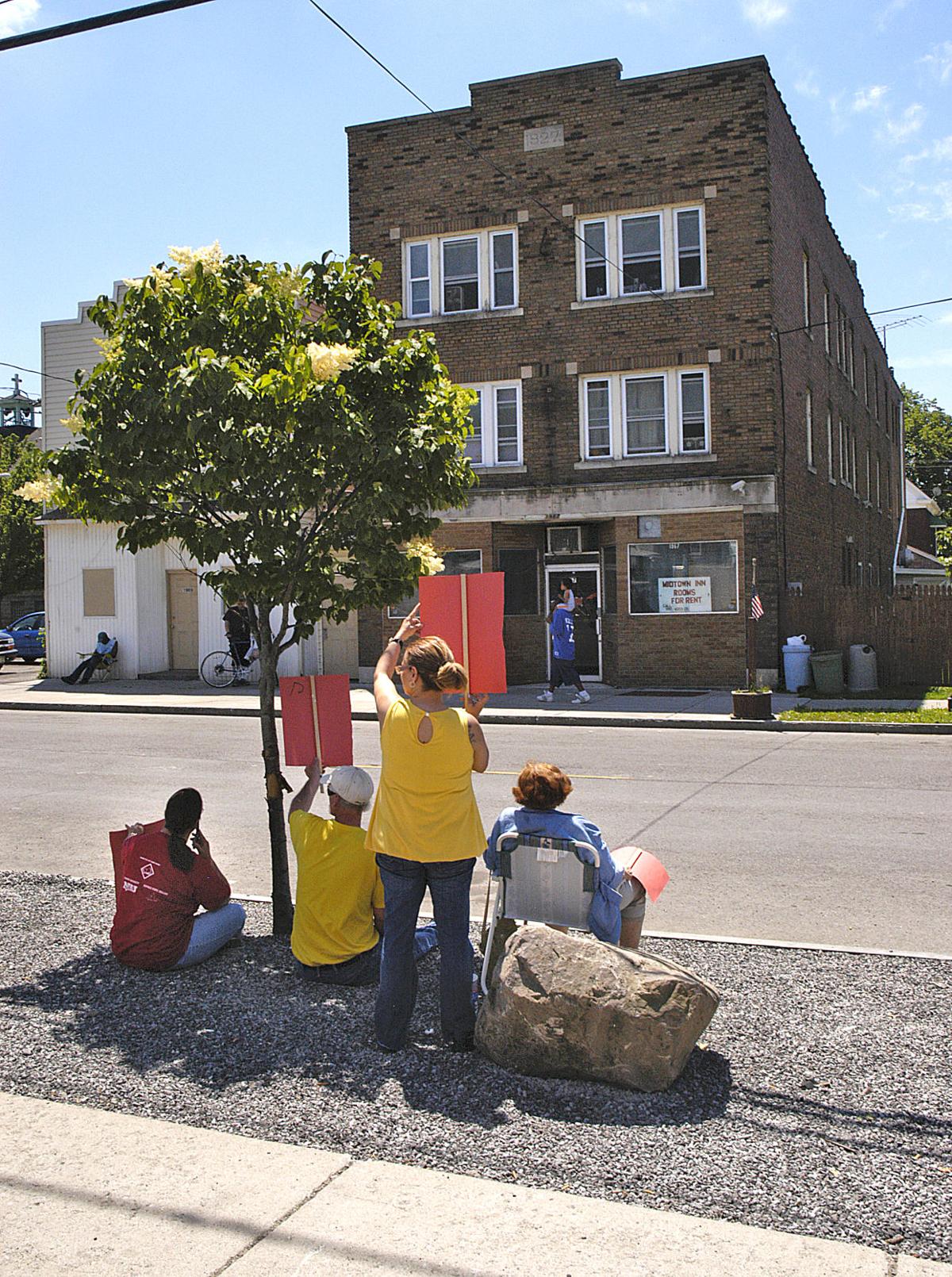 James Neiss/staff photographer Niagara Falls, NY - Protesters picket in front of an apartment house at 1967 Niagara Street where a number of sex offenders have been assigned to live.

James Neiss/staff photographer Niagara Falls, NY - Protesters picket in front of an apartment house at 1967 Niagara Street where a number of sex offenders have been assigned to live.

“Absurd, crazy and insane.” Those were the words Manuela Miller uses to describe the housing of registered sex offenders at the Midtown Inn at 22nd and Niagara streets, less than a mile from Niagara Street Elementary School. “We are desperate as parents to do something about this,” said Miller, who has a 5-year-old grandson enrolled in the Falls school district. “We need help and we’re not taking no for an answer.” To deliver that message, Miller organized an informational protest along Niagara Street on Tuesday and was joined throughout the day by a couple dozen participants and supporters, including city, state and school officials. Protesters held up signs such as “Who’s Watching Your Children?” and “What’s a Child’s Life Worth?” and encouraged people to sign a petition calling for removing offenders from the Midtown Inn. The petition already had 200 signatures by 10 a.m. Niagara Street officials have secured support from the city, school district and Assemblywoman Francine DelMonte’s office on the issue, but Miller said something needs to be done soon. Close to 80 percent of Niagara Street’s 630 students walk to school. “There’s two mentally ill sex offenders living there ... we need to get them out immediately,” she said. “We can’t take a year to decide what to do, something can happen to one of our children before that. We know it’s going to be a little hard to get them out because, of course, they have rights too, but I think our children take priority.” At least eight Level 2 and 3 sex offenders live inside the Inn now, all convicted of offenses involving children between the ages of 6 and 13. The building, formerly the Zodiac Lounge, houses the largest concentration of sexual offenders in Niagara County. Level 2 and 3 offenders are the most dangerous classifications. According to www.familywatchdog.us, close to 40 registered Level 2 and 3 offenders are living within a 1-mile radius of Niagara Street school. The most recent addition to the Midtown Inn is registered sex offender James A. McKinney, who was assigned there last month by Supreme Court Justice Richard Kloch even though the majority of his sex crimes happened in North Tonawanda, where he and his mother reside. McKinney, 51, is completing a seven-year prison sentence for having sex with four girls younger than 14 and is considered to have a mental abnormality that makes it likely he will re-offend. Tuesday’s protest, which was given clearance by city police and the school district, began shortly after 8 a.m. across the street from the elementary school and shifted to across the street from the Midtown Inn as the day went on. Miller didn’t rule out the possibility of more protests in the days to come until the public receives information from the state’s Division of Parole on how the offenders are monitored and supervised and details on how they’re assigned to sites. “We’ll be out here as long as it takes,” she said. Niagara Street business owner Sharon Szwedo agreed, saying the protest is just one of the steps in a process to eliminate offenders from the neighborhood. “If nothing else, this will accomplish community awareness and maybe the people (at the Midtown Inn) will stay away from our kids,” Szwedo said. “We’re going to take this as far up as we can, even if that means the justice system.” The Midtown Inn is in violation of a city ordinance preventing Level 2 and 3 registered sex offenders from living within 1,500 feet from a school, park or child care facility. However, the ordinance conflicts with the state’s regulations which allows residence if it’s at least 1,000 feet away. “It doesn’t matter if it’s 1,500 feet or 1,000 feet away, it’s in the same neighborhood as a school and that’s unacceptable,” said Niagara Falls Board of Education President Robert Kazeangin. “There needs to be another alternative for these people to go and be rehabilitated.”

David Lapp, 77, of the Town of Niagara, entered into eternal rest on December 13, 2020 at Niagara Hospice. Born in Niagara Falls, he was the son of Evelyn and John Lapp. Mr. Lapp was a CPA at his own firm in Niagara Falls. He had been Vice President of Finance for Sattler's Department Store …