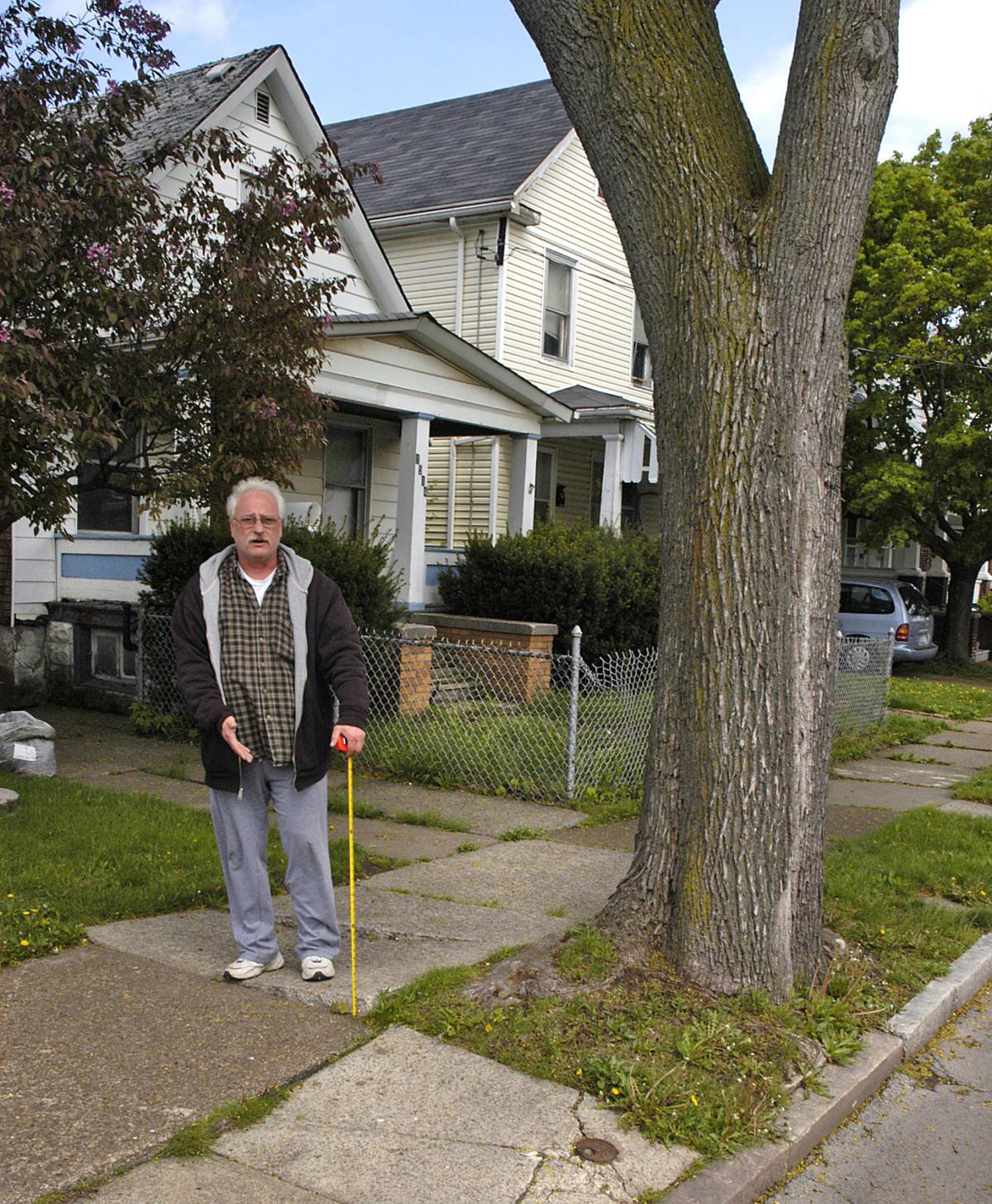 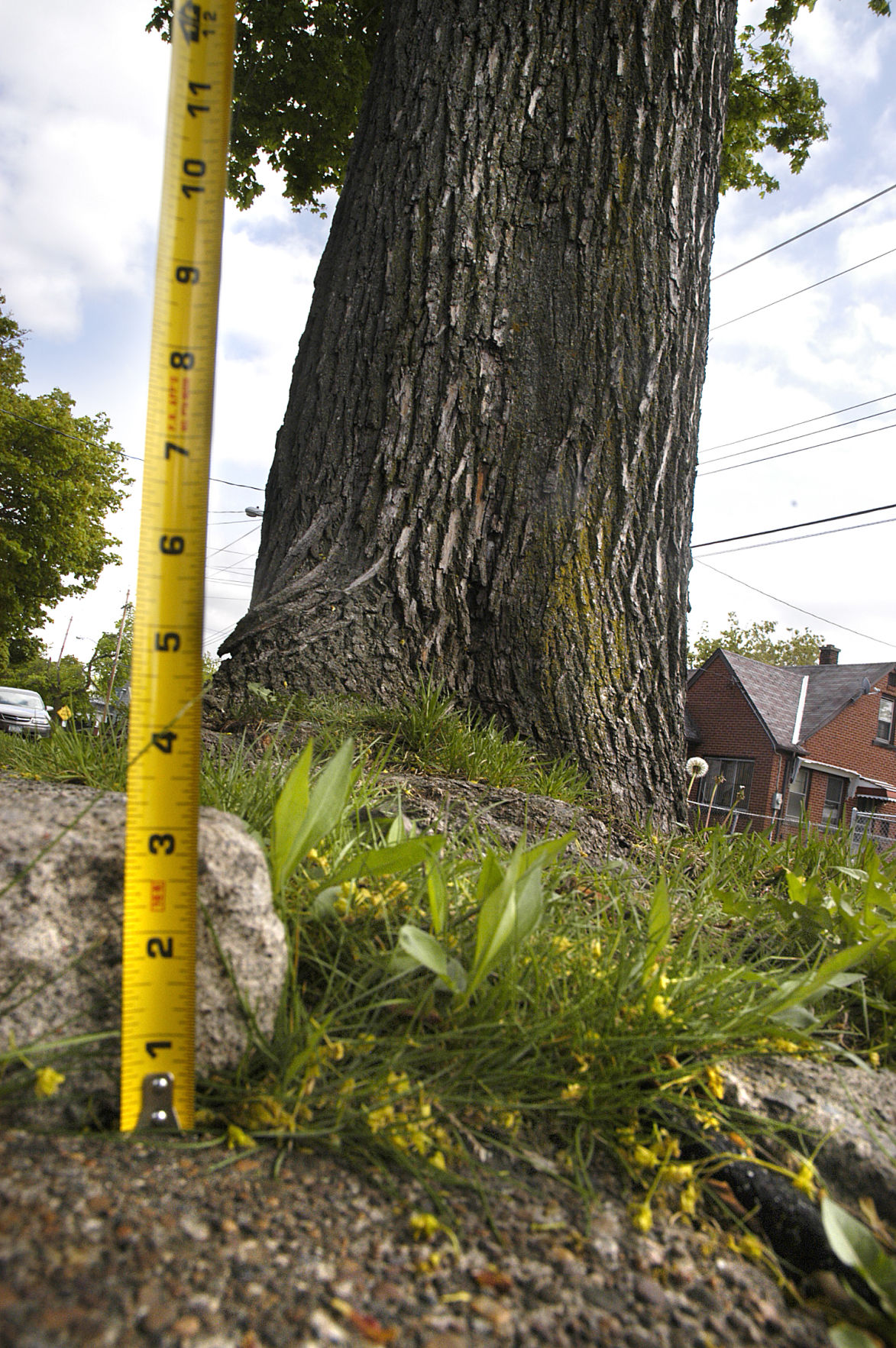 by DAN MINER minerd@gnnewspaper.com Laurel Nolan started complaining about a city-owned maple tree in 1989. Since then, the tree has broken and displaced sewer lines to her 13th Street home, costing thousands in plumbing bills, she said. It also uprooted a sidewalk, which has since been replaced. She said she’s sent copies of bills to prove the damage and made repeated pleas for the city to take the tree down. The tree has been trimmed but so far there has been no further action. She said she may resort to a lawsuit. “I’m not a person who goes around suing people, but come on, it’s been 18 years and you can’t get the (darn) tree down?” she said. “I want action. I’m tired of being the nice guy.” Leonard Trane said he’s been trying to get action on his 40-foot high city-owned oak tree outside his Elmwood Avenue home for at least five years. The roots have pushed the sidewalk up about 15 inches, and children frequently trip over the uneven ground on their way to the 17th Street Boys and Girls Club. Trane too says he hasn’t had luck with the city in trying to take care of the tree, despite numerous complaints and a personal visit by former Mayor Vince Anello. “Nobody wants to do nothing about it,” Trane said. “I’m trying not to be a chronic complainer but if you saw the sidewalk you could tell it definitely needs to be fixed.” A widespread issue Stories of city-owned trees costing homeowners thousands in plumbing bills, creating uneven sidewalks and losing big branches when the winds get heavy aren’t hard to come by in Niagara Falls. After a recent story in the Niagara Gazette detailing the troubles of a young couple in their recently purchased home at 15th Street and Walnut Avenue, calls poured into the newsroom. Judy Lindsay has constant sewer backups at her Michigan Avenue home. She said the sewers will cost $10,000 to fix, the result of roots from a city-owned tree that have found cracked pipes and made their home there. She first contacted the city in 1998. MaryAnn DiTillio also has consistent sewer backups in the basement of her Grand Avenue home as the result of a city-owned tree. Her sister, Jenora Wittmeyer, said she’s spoken with the city at least three times about a tree causing similar problems to her Forest Avenue home. A familiar problem The problem is a familiar one in Niagara Falls, where a lean budget means tight staffing in most city departments. The city, with an estimated population of about 52,000, has one forestry crew with five employees dealing with everything from regular tree maintenance and storm cleanup to working ahead of paving crews in the warmer months. With such a heavy workload and low staff levels, the city’s forced to deal with only the most hazardous trees first, City Arborist Paul Dickinson said. That’s what leads to frustration from people who think complaints are added to a chronological list. “It would be nice if we could move as complaints come in,” he said. “But what happens is our priorities change daily.” From conversations with other employees, Dickinson said he’s heard the city used to have as many as 20 people working in its forestry department. “We could actually use four crews,” he said. “I can’t see us in the near future getting to a maintenance schedule. We’re just too far behind and there’s not enough manpower.” Moreover, tree maintenance takes a significant amount of time, said city Department of Public Works Director David Kinney. Taking down one tree can take as many as two days, and if a city-owned tree falls down, any set schedule has to be discarded to take care of it. “We feel for the people out there,” Kinney said. “We live in the city and I understand what they’re going through. But we can only deal with what we have and the best job we can do with that.” Familiar complaints As far as the specific complaints, Kinney and Dickinson said they’ve heard them: Trees damaging sewer lines, uprooting sidewalks and getting tangled in power lines. As for the sewer lines, Kinney said they’re usually cracked first and roots find their way into the holes, especially when the lines are old and made of clay. Oftentimes the fix for that is newer sewers, made with PVC pipe, that won’t be penetrated by a root. “People feel we’re neglecting them, ignoring them,” Dickinson said. “I make every effort I can to talk to them personally. But to be honest this time of year I get so many inspections we can’t talk to them and can’t call them all.” Lean times It’s less than five full months into Mayor Paul Dyster’s four-year term, and already he’s well-familiar with the limits of city maintenance with the budget they have to work with. He’s already had to answer questions about too few snow plows and too many potholes. “There’s only so many people in DPW and I think everyone knows we’re working very hard to deal with the pothole question,” said Dyster, who’s working with the budget proposed by former Mayor Vince Anello. “There’s a huge backlog of maintenance for everything in the city and unfortunately we can’t do everything at once. There is some tradeoff.” He pointed out the city’s investment in a new bucket truck for the forestry department and said the issue will be revisited when they start discussing the city’s 2009 spending plan. “Is that something we should probably be taking a look at when budget time comes? Yes, I think it probably is,” Dyster said. Contact reporter Dan Miner at 282-2311, ext. 2263.