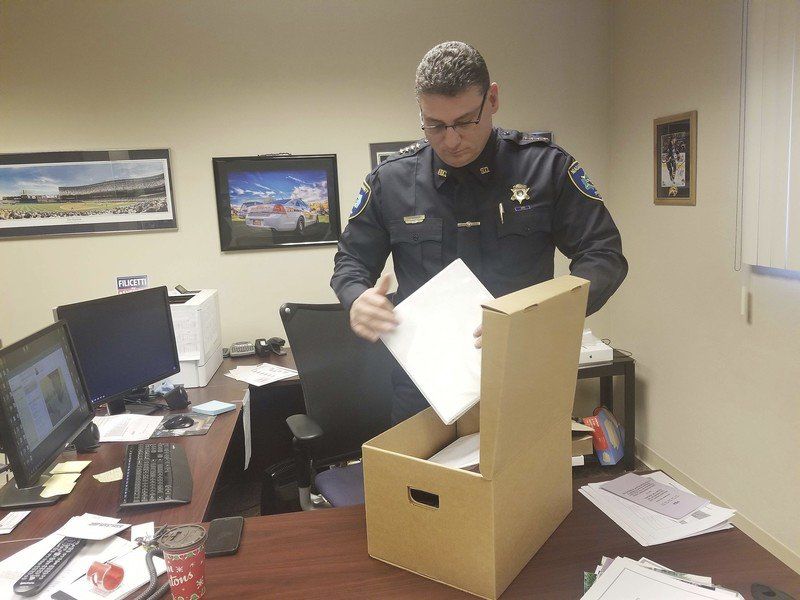 Niagara County Sheriff James Voutour packs up his desk as he prepares to step down. His last day on the job is Monday. 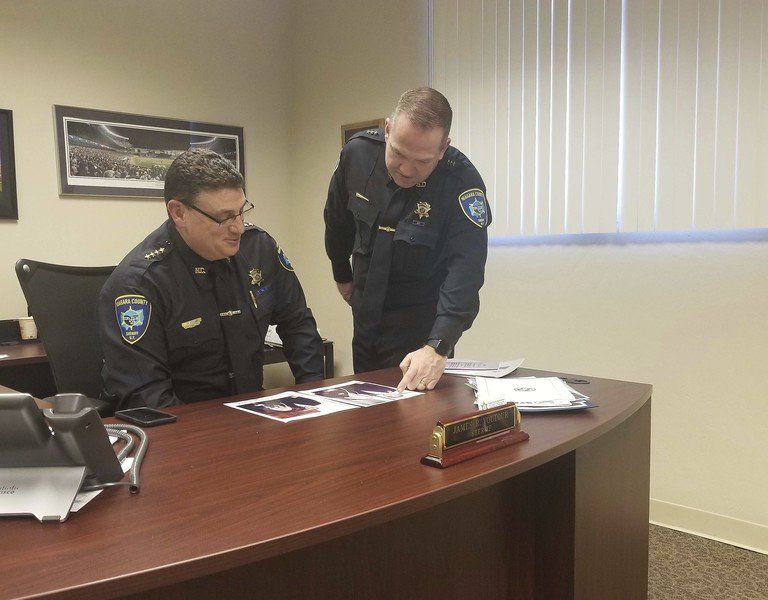 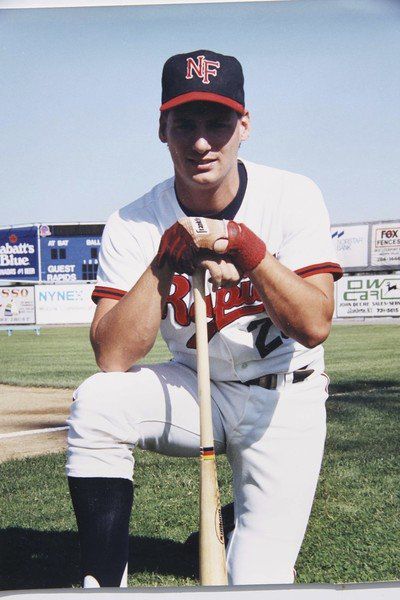 Niagara County Sheriff James Voutour packs up his desk as he prepares to step down. His last day on the job is Monday.

He coulda been a ball player.

But he became the sheriff of Niagara County instead.

Now, 26 1/2 years later, James Voutour will move on to a new chapter in his life when he steps down from his post on Monday.

His retirement comes 11 years after he was first sworn in as sheriff and one year short of the completion of his fourth term in office. He says he’s ready to lay down his gun and badge and take life at a little bit slower pace, working in the private sector.

“I’ve been going seven days a week for 11 years,” Voutour said. “The new job, I’ll have more time on my hands.”

More time for family, his wife and daughters, who he says sacrificed for him to lead the county’s law enforcement agency. He notes he couldn’t have done the job without his family’s steadfast support.

“But you get tired and worn down,” he says, while looking up and smiling slightly. “And I think a fresh face and fresh ideas will be good for the county.”

Rising to the top

The Wilson native made his own way to becoming Niagara County’s chief law enforcer.

Fresh from Brockport State College, Voutour signed a contract to play ball for the Detroit Tigers. His professional baseball debut, as luck would have it, came in the uniform of the Niagara Falls Rapids in the summer of 1990.

After a season of riding the bus in rookie ball, he was off to Philadelphia to prepare for a spring training assignment with the Tigers. But then, fate threw him a curve ball.

“I was training in Philly and the Tigers called and told me they had released me,” Voutour recalled. “That’s when I knew I had to get a real job.”

Voutour hadn’t thought a lot about a career outside of baseball, but he had a friend who was a Niagara County sheriff’s deputy and he had taken a ride along with him one time.

“No one in my family was ever in law enforcement. I never took a criminal justice class in college,” Voutour said. “But after that ride along, I fell in love with the business.”

In 1992, Voutour did something that few law enforcement recruits did at that time. He got accepted into the Chautauqua County Law Enforcement Academy and paid his own way through the six months of training to become a certified police officer.

Most police officers took a municipal civil service exam and waited to be hired by a law enforcement agency that would put them through the academy, training them while paying them, at taxpayer expense.

When Voutour became the Niagara County sheriff, he struck a deal with Niagara University to move the Niagara County Law Enforcement Academy to the NU’s Lewiston campus and pair it with the university’s criminal justice program, giving recruits the opportunity to earn their college degree and police certification.

Graduating from the Chatauqua County Academy in 1993, Voutour joined the Jamestown Police Department as a patrol officer and began learning his new job “on the streets.”

“The academy gives you the basics,” he said. “But you really learn the job with your Field Training Officer and then you learn even more when you (go on patrol) on your own. And you keep on learning right up until the day you walk out the door.”

It wasn’t long after joining the Jamestown force, that tragedy led Voutour back home to Niagara County.

On July 22, 1993, Niagara County Sheriff’s Deputy Jeffrey Incardona raced to respond to a call of a Lockport Police officer shot at 3 a.m. in a remote section of the city. Incardona never made it to the scene.

His patrol car struck a utility pole and burst into flames. The 29-year-old father of three burned to death.

From there, Voutour went up the ranks in the sheriff’s office. From deputy to sergeant, to chief deputy, to Sheriff in 2008.

“I’ve learned to adapt to change,” he said with a chuckle. “The job is very different then when I started.”

He’s saddened by the change in the way people regard members of law enforcement. A lack of respect, troubles him.

The advances in crime-fighting technology have drastically changed how deputies do their jobs.

“Everybody is on computers,” he said, laughing. “We didn’t have computers in our cars. We hand-wrote everything.”

And Voutour said, today’s young recruits come on the job with a different set of expectations.

“The new cop is different. They look for more job satisfaction,” he said. “When I came on, you wanted to work weekends because that was when you could catch bad guys. Now, (new recruits) want to know if they’ll have weekends off. You have to adapt your leadership to them.”

Voutour also noted that social media has had a profound impact on policing. But while some commanders have chaffed at the role social media can play, Voutour has embraced it.

“We were the first (local law enforcement agency) to be on Facebook, Instagram, Twitter,” he said. “We felt it was a unique bond that was easy to make with the community we serve. We can instantly get information to the public.”

Asked if the job has become more dangerous, he pauses to reflect on the question.

“The numbers (of officer deaths in the line-of-duty) are pretty consistent,” Voutour said, “but yeah, I think it’s more dangerous now.”

The sheriff said some of the new danger stems from an escalation in “mental health calls.” He feels the state has “turned its back” on the current mental health crisis and “just left it to us to deal with.”

On a positive note, Voutour says he has seen an evolution in relations between local and federal law enforcement.

“We work closely with our federal partners,” he said., “We share more information. We talk more and that’s a positive change.”

He’s hopeful that local law enforcement agencies will continue to look at ways they can share services. In particular, he’s proud of the county’s build-out of a state-of-the-art communications system.

“We’ve build one of the best communications systems in the nation, and we’re still making it better,” Voutour said.

As he prepares for his final days in office, Voutour says he will miss going to work every day with his “best friends.”

“That’s the toughest thing,” he acknowledges. “My best friends on earth work with me every day and I’ll miss them.”

Voutour says he’ll also miss interactions with people outside of law enforcement who have had an impact on him. One in particular is former Buffalo Bills All-Pro defensive back and now NFL Executive Vice President of Football Operations Troy Vincent.

“Because he gets it when it comes to domestic violence,” Voutour said. “He understands what it takes to be a man and raise a family. Football was his job, but seeing men confront domestic violence, that’s his mission.”

And, of course, there was that time when the former ball player had a chance, at a law enforcement conference, to meet legendary Los Angeles Dodgers manager Tommy Lasorda.

“He was great. We talked baseball,” Voutour said, “He’s Sicilian, and so is my wife, so once they started talking I was pretty much cut-out of the conversation.”

His hardest day n the job, he says, was when Deputy Allen Gerhardt was involved in an horrific crash while rushing to catch a hit and run driver.

“Meeting him at the hospital and being the one who had to tell him that the doctors said they had to take his legs off,” Voutour said solemnly. “And then hold the clipboard so he could sign the paperwork for the surgery. I’ll never forget that.”

His new job will allow Voutour to travel the country, and he’ll still attend major law enforcement conferences, where he’ll be able to stay in touch with friends. But he understands, after 3 p.m. Monday, his life will be changed forever.

“My wife will drive me home,” he said with a smile. “And then I’ll have some time on my hands.”