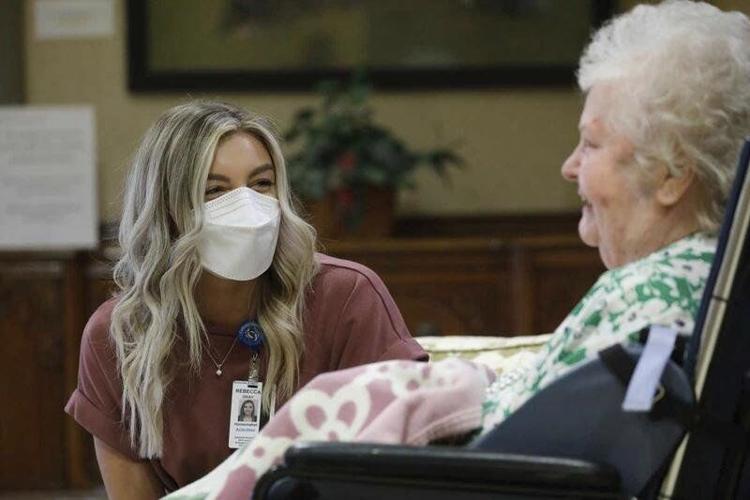 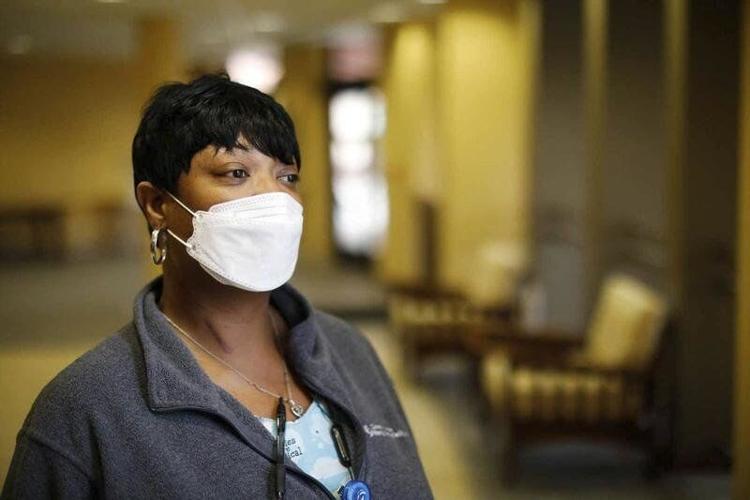 Dionne Dixon, a unit secretary at Mercy Hospital Skilled Nursing Facility, said she has not received the vaccination because of concerns for her own health. Sixty-four percent of the Lackawanna nursing home's workers have been vaccinated, as of April 14. (Derek Gee / Buffalo News)

Dionne Dixon, a unit secretary at Mercy Hospital Skilled Nursing Facility, said she has not received the vaccination because of concerns for her own health. Sixty-four percent of the Lackawanna nursing home's workers have been vaccinated, as of April 14. (Derek Gee / Buffalo News)

Although some 15,000 long-term care facility residents in New York State have died due to Covid-19, 39% of the state's nursing home workers have yet to get vaccinated.

At the Buffalo Community Healthcare Center, 20% of the staff have been vaccinated as of mid-April, according to the state Health Department. A few blocks away at the Buffalo Center for Rehabilitation and Nursing, 24% of workers received the vaccine.

Only 30% of the staff have been vaccinated at Comprehensive Rehabilitation and Nursing Center of Williamsville, which had one of the worst Covid-19 outbreaks in early fall at any nursing homes nationwide.

The issue of low vaccination rates among nursing home workers is not confined to Western New York. Thirty-nine percent of the 146,000 workers statewide have not been vaccinated.

In contrast, only 19% of the state’s 88,978 nursing home residents have not been vaccinated.

The lagging percentages of vaccinated staff is upsetting to people with loved ones in nursing homes.

“It is appalling. If you are a front-line worker in a nursing home, then you need to be vaccinated. You’re taking care of sick people,” said Colleen Van Order, whose brother resides at Buffalo Community Healthcare Center on Delaware Avenue.

Employers can exclude individuals from the workplace who refuse the vaccine, according to the federal Equal Employment Opportunity Commission. But the federal government allows exceptions for workers who cannot receive the vaccine because of a disability or because of “sincerely held” religious beliefs.

Gov. Andrew M. Cuomo has said he does not believe the state has reached the point where it should make Covid-19 vaccinations mandatory for health care workers.

There are some area nursing homes where nearly all of the workers have embraced the vaccine without a mandate.

After refusing for nearly three months to provide vaccination rates at individual nursing homes, the state Health Department released that data on April 14 to The Buffalo News.

“This is the home of all these people and the workers treat it like their home,” said Thomas C. Hopkins, Dunkirk Rehabilitation’s administrator.

How did Dunkirk Rehabilitation succeed in getting most of its 45 full- and part-time workers vaccinated? Officials there offered these solutions:

• A familylike atmosphere amongst the small facility’s 40 residents and employees fostered concern for the safety of each other.

• Frequent staff meetings where supervisors shared the latest information from the state on guidelines for prevention of the virus and the toll the virus was causing elsewhere. At those meetings, workers were “strongly encouraged” to receive the vaccine.

“We would have updates on communities where they were having severe cases. It strikes everyone at multiple age levels, multiple locations and with multiple comorbidities. This would prove to everyone that no one was beyond access to this virus,” said Shawn Horton, Dunkirk Rehabilitation’s nursing director.

• Ongoing efforts to convince the four employees and two residents who declined the vaccine that it would benefit them to receive it, she said.

“We do reapproach them from time to time and re-educate them on the current vaccine and safety,” Horton said.

Hopkins pointed out that the staff has a history of taking precautions to stop the spread of infections. Each year, he said, 98% of the workers receive a flu shot.

At Mercy Hospital Skilled Nursing Facility in Lackawanna, where 100% of the 84 residents have been vaccinated, the rate of vaccination among its 135 full- and part-time staff is 64%.

Dionne Dixon, a unit secretary at the nursing home, said she has not received the vaccination because of concerns for her own health.

“It’s due to the fact that I feel that the vaccine was rushed and I wasn’t sure about any side effects. I just want to wait it out and see what the side effects are,” Dixon said.

Dixon said she does not believe she is putting residents at risk because she follows protocols of social distancing and wearing a mask. But the mother of two school-age children said that in time she is likely to be vaccinated so that her health will not be an issue when her children return to the classroom.

Rebecca Gray, an activities assistant at Mercy Skilled Nursing, said she initially was undecided on whether to receive the vaccine.

“I felt like a lot of people, skeptical about putting something into their bodies, a fear of the unknown. But after speaking with my colleagues and doing a little bit of my own research, I ultimately decided to get the vaccine,” Gray said.

Another factor had been the two-week visitation shutdowns at nursing homes when a positive case of Covid-19 was detected.

“That swayed my decision. I didn’t want to be the one who keeps the residents from their families,” she said.

The state has since loosened visitation guidelines, allowing visits if Covid-19 cases are limited to a single area and appropriate safeguards are put in place.

Colleen Curcio, LPN, an admissions coordinator at Canterbury Woods, talks about how at first she was reluctant to get the vaccine but changed her mind with the gentle nudging of a friend, who reassured her of the vaccine's benefits.

At Canterbury Woods, Colleen Curcio, a licensed practical nurse who oversees admissions, said she, too, was reluctant to be vaccinated in January when the vaccine first became available to nursing home workers.

“It’s not like the flu shot, a known shot that has been around for years,” said Curcio.

But as weeks and months passed and she observed residents and staff at the facility were not experiencing “crazy reactions,” Curcio said she became more comfortable with the idea of getting the vaccine.

For Curcio, she decided to get vaccinated after a close friend and colleague who had also been concerned went ahead and got the vaccination.

“That played a big part. She worked here and like myself wasn’t sure at first. But she got it and we talked about it. She said it was good protection for other people. She wanted to protect her family and the residents. She thought it would make me safe. She really believed it and she is someone I love and it really resonated with me,” Curcio said.

Curcio said the decision on whether to be vaccinated is personal.

“I’m not here to really convince other people. I really believe it is a personal choice, but I feel it was the right choice for me. It’s a month later and I haven’t had any side effects,” said Curcio, one of 120 Canterbury workers.

“Leadership takes many forms, and top-down mandates like that often don’t have the desired effect. Instead, we relied on communication and people, believing that would be the far more effective approach long term,” he said.

There are 35 residents at Canterbury Woods, all of whom have been vaccinated. Canterbury and Mercy Skilled Nursing are the only nursing homes in Western New York to reach a 100% vaccination rate for their residents.

Courtney Fasolino, Mercy Skilled Nursing’s administrator, said that families of residents were “very influential” in encouraging their relatives to receive the vaccination.

“What it meant to us is that we were able to get back to somewhat normal,” Fasolino said, adding that the staff vaccination rate of 64% is a “moving target.” Two of three more workers every week are coming forward to be vaccinated, she said, often inspired by seeing residents who have been vaccinated and are doing well.

At Buffalo Community Healthcare Center, which has the lowest vaccination rate for staffers in the region, a spokesman declined to offer insights into the reasons.

“Simply, any staff member or resident that requests vaccination, has it within 14 days,” Jay Lawrence said.

Lawrence disputed the state's 20% figure, claiming it is inaccurate. He declined to provide The News with a statistic. The state Health Department pointed out that Buffalo Community Healthcare provided it with the 20% vaccination figure.

Comprehensive Rehabilitation, which has the fourth-lowest vaccination rate for workers, did not respond to requests for comment from The News.

Jeffrey Hammond, a spokesman for the state Health Department, said the agency has repeatedly emphasized to nursing homes the need to increase vaccinations.

“Nursing home operators have known all along that a Covid vaccine is one of the best ways to protect residents and staff from this dangerous virus,” Hammond said. “Inexplicably, numerous nursing homes are letting vaccine doses sit on shelves.”

Nursing homes, under the new regulations, must also keep records of their efforts by maintaining “a signed affirmation from anyone who declines, stating that they declined vaccination and that they understand that they may request it from the facility at a later date.”

Facilities must also display signs reminding employees and residents the vaccine is available. Nursing homes that fail to comply with these new regulations may face fines up to $2,000 per violation, Hammond said.

The leadership at Local 1199, Service Employees International Union, which represents nursing home workers, including those at Buffalo Community Healthcare Center and Comprehensive Rehabilitation, said they have undertaken several efforts to promote increasing the vaccination rate.

In acknowledging "there are still many workers who are reluctant to get vaccinated," 1199 spokeswoman April Ezzell offered these insights into what is being done to improve rates:

“…1199 has been encouraging our members to get vaccinated and celebrating and lifting up their personal vaccine stories through our comprehensive member education program."

“We’ve also held several tele-town halls with workers to put them in contact with doctors qualified to answer their specific questions as well as a dedicated email where members can send their questions," she said.

“We support and encourage folks to get the vaccine, but do not support a mandate.”

LeadingAge, a national trade association of nonprofit, long-term care providers, has initiated a campaign called “Drive for 75” that seeks to increase the percentage of vaccinated workers to at least 75%, according to the organization's website.

Vaccinated doctors and nurses from around the country serve as “credible validators” who share their insights on the vaccine with workers who are hesitant to receive it, said James Clyne, chief executive officer of LeadingAge New York.

What relatives of residents say

One of the reasons Linda Keatting of Cheektowaga said she had her 94-year-old mother transferred out of Comprehensive Rehabilitation last month was because she learned that many workers were turning down the vaccine.

Keatting said she would sometimes ask workers if they were getting vaccinated. She says she was taken aback by the responses.

In making a case that vaccines are necessary, Keatting cited data provided by Comprehensive Rehabilitation to the U.S. Centers for Medicare and Medicaid Services that there have been 60 confirmed Covid-19 cases among staff members through March 28.

Timothy J. Swan, who serves as an advocate for a friend who is a resident at the Buffalo Community Healthcare Center, said he believes nursing home workers should be vaccinated. When nursing home visitations are temporarily discontinued because of Covid-19 cases, Swan said families, friends and residents are denied the chance to be with one another.