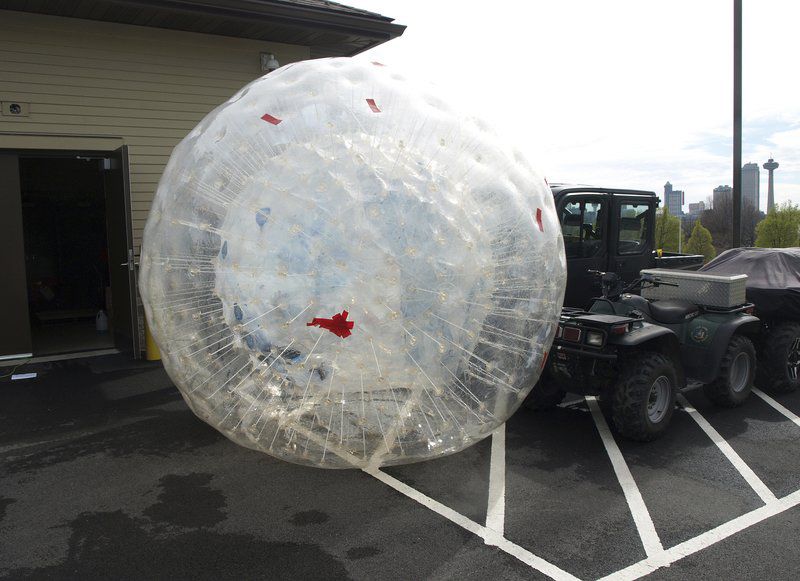 Courtesy of New York State Parks PoliceThe plastic ball retrieved from the Niagara River that New York State Park Police believe was to be used in a failed attempt to go over Niagara Falls by Kirk Jones. The unoccupied ball was found April 20. Jones' body was found June 2. 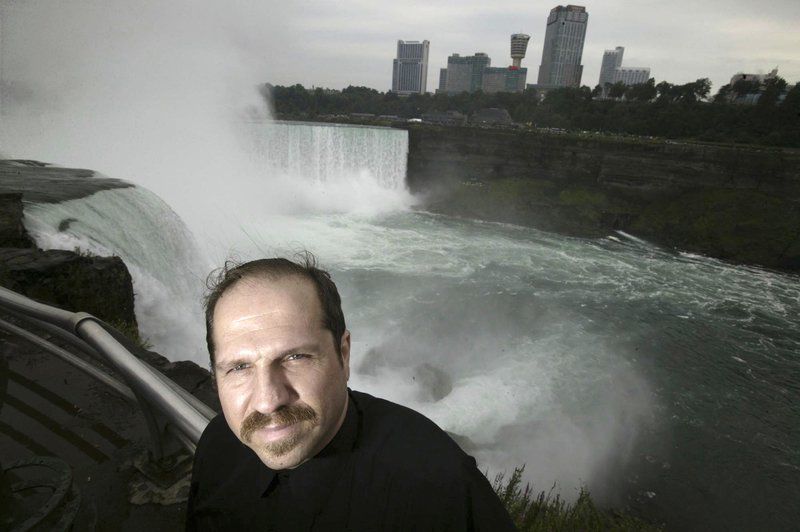 In this Aug. 13, 2004, file photo, Kirk Jones poses for a photo at Terrapin Point on the American side of Horseshoe Falls in Niagara Falls State Park. 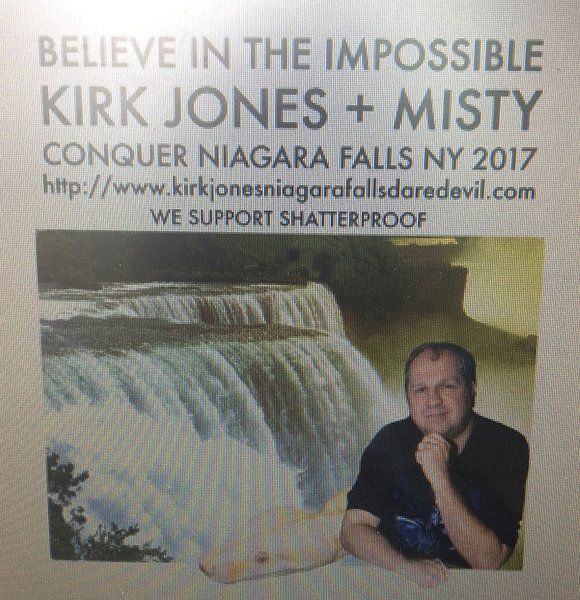 Courtesy of New York State Parks PoliceThe plastic ball retrieved from the Niagara River that New York State Park Police believe was to be used in a failed attempt to go over Niagara Falls by Kirk Jones. The unoccupied ball was found April 20. Jones' body was found June 2.

In this Aug. 13, 2004, file photo, Kirk Jones poses for a photo at Terrapin Point on the American side of Horseshoe Falls in Niagara Falls State Park.

The curious case of the death of Kirk Jones is not closed.

Despite the recovery and identification of Jones’ body, New York State Park Police are still trying to piece together the details of what happened to Jones on the morning of April 19.

At the moment, they have just as many questions as they have answers.

Why did Jones, who survived a suicide attempt over the Horseshoe Falls in 2003 make another attempt to survive the perilous 167-foot plunge?

Why wasn’t Jones inside the 8-foot plastic ball, that was going to be his vessel, when it was spotted in the Niagara River rapids and then, finally, went over the falls?

And where is the 7-foot long boa constrictor, named Misty, that he apparently had planned to have join him on his ride?

A large three-ring binder sits on Nisbet’s desk as he talks about the Jones case. A half dozen compact discs rest on top of the binder.

The discs contain video footage that investigators have examined, including some shot from a drone that belonged to Jones. But Nisbet says the investigation into Jones’ death remains open because all the available evidence still hasn’t given authorities a full picture of what, for now, appears to have been a stunt attempt that went terribly wrong.

The first sign that a stunt may have been underway came in a call to Park Police headquarters from a tourist. They reported a “shiny object” in the rapids.

A Park Police officer who responded to the call captured what he saw on video. In the video, a plastic orb, capable of holding a person, spins on top of the fast-moving water.

“You can see (the plastic ball) spinning in the rapids,” Nisbet says as he describes the video playing on his computer screen. “We can also clearly see it’s unoccupied.”

The ball appears to be made of light-weight commercial plastic, with a side port to inflate it, and a blue, zippered hatch to enter it. As the ball spins in the water, the hatch is clearly open.

“We had no idea where it come from,” Nisbet said. “We didn’t now if it could have come from a backyard or someplace else. And we hadn’t heard anything about a possible stunt attempt.”

Some Park Police officers wondered if someone had placed the ball in the water as a “practice run” for a stunt.

The next day, April 20, more clues surfaced. A parks employee found a crashed drone on Goat Island. Identification on the drone showed it belonged to Kirk Jones.

Then, police got a call from Kirk Jones’ wife. She told them she feared her husband had gone over the falls.

A source said Jones had called his wife and told her he was “doing a stunt at the falls.” Jones reportedly told to her to wish him luck.

It was the last she heard from him.

Later in the day, Nisbet found a webpage, www.kirkjonesniagarafallsdaredevil.com. The site featured a photo of the falls with a picture of Jones, and the boa constrictor Misty, with a headline that read: “Believe in the Impossible Kirk Jones + Misty Conquer Niagara Falls NY 2017.”

The site offered t-shirts with the legend and photo for sale. The site has now been taken down.

Park Police then began an intense manhunt for Jones and Misty. When the plastic ball finally went over the falls, and was recovered by the Maid of the Mist, there was no trace of Jones or Misty inside.

“We were looking for him and a 7-foot boa constrictor,” Nisbet said. “But experts on exotic pets told us that the snake could not survive in water that cold.”

Investigators were also contacted by a Michigan man who told them he had come to the Falls with Jones to help him with a stunt. The man said he helped carry the ball into the state park but decided the stunt was too risky and left.

What happened after that is at the heart of the mystery that is Jones’ death.

Police don’t know how Jones got into the water above the falls. They don’t know if he lost his balance trying to handle the ball and the snake without any help and fell into the rapids.

When the ball was recovered the hatch was open and there were large gashes in the plastic. Had Jones panicked because water would have leaked in through the zippered hatch and he had gotten out of the ball and into the water?

Maybe the snake, alarmed by the cold water of the rapids, turned on Jones?

No one knows for sure.

Jones’ friend told investigators that the would-be daredevil had a wrist control for his drone. Park Police eagerly looked at the video recovered from it.

To their disappointment, the video lasted just 2 minutes and 44 seconds. The drone takes off, hovers over the rapids, and then crashes.

All that is visible in the footage is the fast flowing water. There is no sign of Jones, Misty or the plastic ball.

Without Jones, Misty or their bodies, park police wondered if they could have been dealing with something other than a stunt.

“We didn’t know if we actually had a stunt or even a hoax,” Park Police Major Patrick Moriarty said.

Police did find Jones’ van, parked on Main Street. Inside was an empty snake cage.

Then, on June 2, a sailing vessel at the mouth of Lake Ontario and the Niagara River, made a grim discovery.

“They saw a body in the water and notified the Coast Guard in Youngstown,” Nisbet said. “The Coast Guard then made the recovery.”

The body was Kirk Jones.

The man who had become a part of the legend and lore of Niagara Falls in 2003 had tempted fate once too often.

In 2003, Jones had waded into the rapids on the Canadian side of the water and was swept over the Horseshoe Falls. That was a suicide attempt.

An unemployed salesman from Canton, Michigan, Jones became the first person to survive a plunge over the falls, without a safety device or protection since 1960. That was when 7-year-old Roger Woodward survived wearing only a life jacket.

Jones said depression had led him to climb down an embankment and float feet first over the falls. He described the water above the brink of the falls as “like an ice bath” and said the pressure was so great “I thought it would rip the head from my body.”

But he added, “all my problems were left at the bottom of that gorge.”

His celebrity eventually faded. Jones, 52, had not been in the public eye in recent years.

Sources said he had fallen on hard times financially. His stunt may have a been a desperate attempt to cash-in as others have recently in high-profile events authorized by New York state.

But there will be no financial reward for Jones. Just lots and lots of questions.

“Misty is still missing. We don’t know what happened to Misty,” Nisbet said. “We still have all these questions about what happened. It’s been very peculiar. And the answers to our questions probably went over the falls with Kirk.”