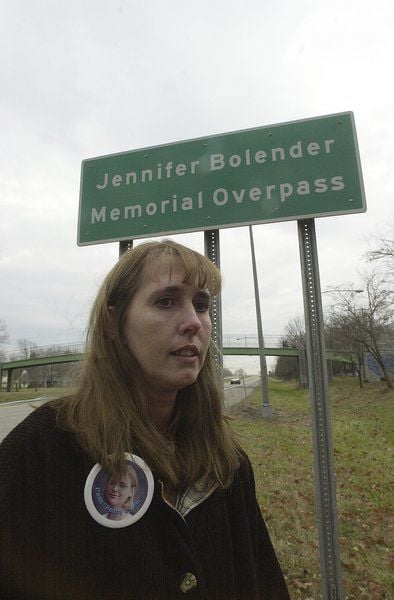 In this file photo from 2003, Tina Berry stands in front of one of the signs after the walking bridge over the LaSalle Expressway between 66th street and 67th streets was renamed the Jennifer Bolender Memorial Overpass. Berry is the mother of Bolender. 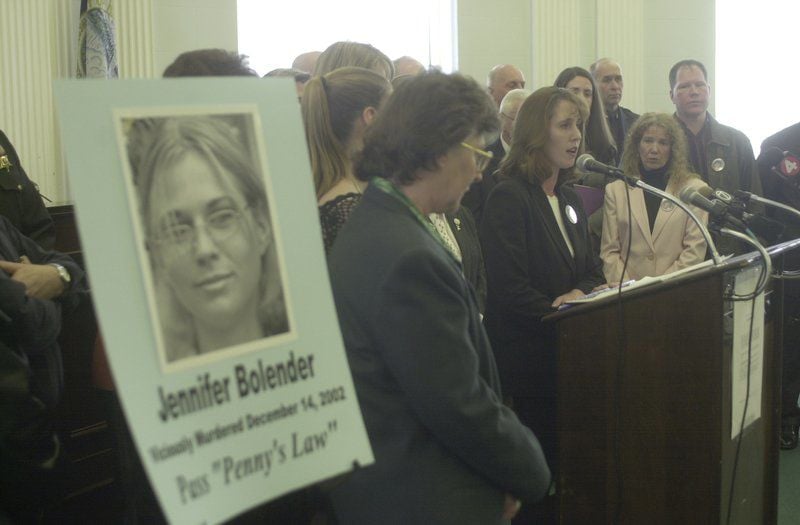 Tina Berry, the mother of Jennifer Bolender, speaks out for support for Penny’s Law during a 2003 press conference at Niagara Falls City Hall.

In this file photo from 2003, Tina Berry stands in front of one of the signs after the walking bridge over the LaSalle Expressway between 66th street and 67th streets was renamed the Jennifer Bolender Memorial Overpass. Berry is the mother of Bolender.

Tina Berry, the mother of Jennifer Bolender, speaks out for support for Penny’s Law during a 2003 press conference at Niagara Falls City Hall.

It’s been almost 17 years since the December night that Jennifer Bolender was slain in a crime so horrific that it left hardened Falls Police homicide detectives shaken by its brutality.

For Tina Berry, Jennifer’s mom, not a day passes that she doesn’t think of her daughter.

“Every night, when I go to bed, I think of her,” Berry said. “I still sleep with her pillow. I hug it every night.”

But pillows and teddy bears can’t bring back dead children. And Berry’s journey through the investigation of her daughter’s murder, the arrest of the three teenage suspects, their convictions for the murder and their prison sentences have taught her there is never an end to the pain and suffering.

“My life went upside down,” she said. “I was happily married and I got divorced. I got drunk a lot. My youngest daughter got into trouble. I had to leave the Falls.”

And now, what little solace she has found in a new home out-of-state, a new marriage and a re-started life, is being ripped away by a decision by the New York State Board of Parole to release one of Jennifer’s convicted killers.

At a hearing Aug. 28, the board decided that it would grant parole to Kyle Cummings. By no later than Oct. 10, Cummings will be released from the Cayuga Correctional Facility and allowed to move back to the Falls to live.

The decision prompted Berry to post an anguished plea on social media.

“ATTENTION!!! ATTENTION!!! KILLER (KYLE CUMMINGS) being released from prison back to Niagara Falls, NY with one of his sisters!!!,” Berry wrote. “PLEASE SHARE!! Protect your families!! This is not justice!!”

Cummings, along with his older brother Christopher and Daniel Pardee, were all convicted in connection with Jennifer’s murder. The Cummings brothers took plea deals from prosecutors, while Pardee was convicted after a jury trial noteworthy for its display of gruesome crime scene photos of the victim.

“It was my first homicide case,” Wojtaszek said. “It’s still the worst one. It’s the most horrific case that’s ever come across my desk.”

Bolender, Pardee and Kyle Cummings had had been hanging out a Niagara Falls Boulevard bowling alley on the night of Dec. 13, 2002. As they walked home, after an argument, Cummings said Pardee tried to kiss Bolender, but she resisted his advances.

Pardee responded by punching Bolender, knocking her to the ground by the entrance to the pedestrian walkway over the LaSalle Expressway. He and Cummings then repeatedly punched and stomped on Bolender as she begged for mercy.

After going to Cummings’ home, they returned to the pedestrian bridge to “clean-up some evidence” and make the attack look like a robbery attempt gone bad. That’s when the teens discovered that Bolender was still alive.

With Christopher Cummings, then 14, the thee teens dragged Bolender more then 100 feet up the pedestrian bridge and, in the words of police investigators, “finished her off.”

Christopher Cummings took a large knife and slashed Bolender’s throat from ear to ear. Pardee then stabbed her 49 times according to an autopsy.

“It was how young the perpetrators were,” Wojtaszek said. “It almost defies words ... To see that brutality was outrageous.”

Wojtaszek said the case defined what kind of prosecutor she wanted to be. To this day, she keeps a picture of Bolender in her office and she has stayed in touch with Berry over the years.

Kyle Cummings eventually agreed to a deal plea that saw him plead guilty to a charge of second-degree murder and agree to testify against his brother and Pardee.

In return for the plea, Berry agreed to a reduced sentence for him.

Niagara County Court Judge Sara Sheldon sentenced Kyle Cummings to six years to life in prison. With his upcoming release, he will have been incarcerated about 17 years.

“I’m not happy about it,” Berry said. “We agreed to six to life. That apparently doesn’t mean a damn thing in the state of New York. And now he can ask to be released from parole every three years.”

Wojtaszek agrees with Berry. She believes Kyle Cummings should still be behind bars.

“I don’t think 17 years is enough,” Wojtaszek said. “He had a lot to answer for.” Berry said Kyle Cummings was the only one of the killers to show even a hint of remorse for what he had done. But that was cold comfort.

“I don’t know how to react (to Kyle Cummings release). I’m having a hard time dealing with it,” Berry said. “The only one who had any compassion was Kyle. But not enough.”

Wojtaszek said police and prosecutors made Kyle Cummings revisit the scene of the crime to explain to them exactly what had happened to Jennifer.

“He was trembling and crying, it affected him,” the DA recalled. “Everything he said that happened in the murder matched what we had been able to put together.”

Wojtaszek said she’s trying to keep Christoper Cummings in prison, writing a latter to the board of parole opposing his release.

“I sat across from Christopher,” the DA said. “He was the coldest human being. He showed nothing. He was an empty vessel of a human being. There’s no reason to ever let him out.”

Even his sentencing judge, Sheldon, said Christopher Cummings should be “removed form society so that he is incapable of causing further harm.”

Pardee, sentenced to 40 years to life, will also have a date with the parole board in a few years.

“Pardee? No! Never, never,” Wojtaszek said on the subject of parole for the killer.

“Knowing they were all in prison make it a little better. Now that (Kyle Cummings) is out, it’s just re-opened everything. I’m emotionally and mentally exhausted.”

As Berry posted on social media,” Where is the justice my daughter is gone!!!”

One of three men involved in the grisly 2002 murder of Jennifer Bolender in Niagara Falls is now facing rape and sexual abuse charges in a new case.