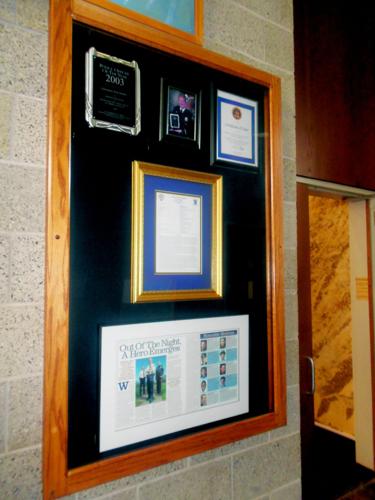 photos by BILL WOLCOTT/STAFF REMINDER: Official commendations and an article that appeared in Parade magazine sit in a frame outside council chambers at Lockport City Hall. Detective Lt. Scott Seekins received several awards for his actions on Feb. 9, 2003, that are credited with saving the lives of Officer Steve Ritchie and then Detective Capt. Lawrence Eggert. 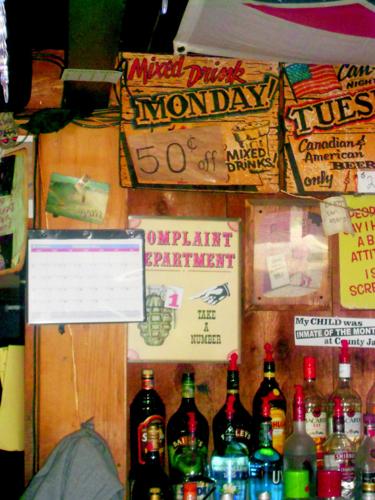 COVER-UP: The incident 10 years ago that led to the shootout began at the Niagara Hotel on Transit Street. Several rounds were fired in the bar by Jason Kanalley. The calendar at left, it is said, covers up one of the bullet holes. 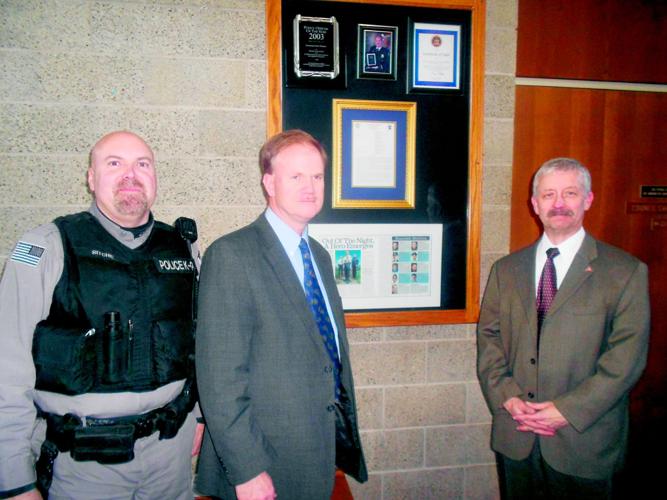 photos by BILL WOLCOTT/STAFF REMINDER: Official commendations and an article that appeared in Parade magazine sit in a frame outside council chambers at Lockport City Hall. Detective Lt. Scott Seekins received several awards for his actions on Feb. 9, 2003, that are credited with saving the lives of Officer Steve Ritchie and then Detective Capt. Lawrence Eggert.

COVER-UP: The incident 10 years ago that led to the shootout began at the Niagara Hotel on Transit Street. Several rounds were fired in the bar by Jason Kanalley. The calendar at left, it is said, covers up one of the bullet holes.

Capt. Lawrence Eggert was shot in the back, the bullet smashing bones in his shoulder.

Lt. Scott Seekins exchanged fire with the shooter and was credited with saving the lives of his fellow officers.

It’s been 10 years since the three Lockport police officers went through an ordeal that forever links them and continues to haunt them.

The event began when an unstable man opened fire in a city tavern late on Feb. 8, 2003, and ended several hours later in the early morning of Feb. 9 in a Town of Lockport trailer park. It left two city officers wounded and the assailant dead after a flurry of gunfire.

It was a national story and Seekins was named 2003 Police Officer of the Year by Parade Magazine and the International Association of Chiefs of Police.

“I know how hard (Scott) was working to save our lives,” Ritchie said this week. “If (Seekins) wasn’t there, we would have been executed. There is no doubt in my mind, we would not be alive today. His award was well deserved.”

Niagara County Sheriff’s Deputy Sgt. Kevin Mack was also under fire and his patrol car was sprayed with bullets. Mack was named the 2003 Deputy of the Year by the New York State Sheriff’s Association.

The shooter, who was armed with an AK-47 assault weapon, got off dozens of shots during the ordeal. Jason Kanalley, 26, of Park Place took his own life around 5 a.m., six hours after it all started.

It is not an anniversary the lawmen celebrate. Physical — and emotional — scars remain.

“Sometimes at 3 in the morning I wake up with a cold sweat,” said Eggert, who is now Lockport’s police chief.

And for Seekins: “It’s a nightmare that will never stop.”

At the bar, Kanalley had fired his assault weapon at a man whose girlfriend Kanalley had once dated. He then fled.

Seekins, who had just been promoted to detective lieutenant, was summoned to collect evidence. “The Niagara Hotel was all shot up inside. I was collecting bullet fragments and bullet casings,” he said.

The whereabouts of the shooter were initially unknown but a woman who was with Kanalley told police he might be in the southeast part of the city.

At 4 a.m. Officer Michael Stover located Kanalley’s car traveling on Beattie Avenue but couldn’t keep up with him. “Slow speed and weather conditions dictated,” Seekins explained. “Kanalley did well because he had four studded snow tires on his front-wheel drive car.”

Police began a parallel pursuit, with most cars heading south on Beattie Avenue while Seekins and Eggert , a captain at the time, went south on Transit in a separate vehicle. Seekins was driving.

The convoy took the Old Beattie Road route into the Woodlands trailer park. Seekins and Eggert chose to go into the southern entrance, near the NOCO station on Transit Road.

“We pulled in there and stopped,” Seekins said. “Presumably, he could come right at us, and that’s exactly what happened.”

The cops and Kanalley passed each other and the policemen took cover — Kanalley had an AK-47 with hundreds of rounds of ammunition.

“We turned around to tail him, hoping other units would catch up, but the other cars (coming from Old Beattie) lost track of him,” Seekins said.

Kanalley pulled into the NOCO station, spun his car around and aimed it at the police. “He pulled out and tried to T-bone us but he missed. He nearly went into the ditch himself,” Seekins said.

Kanalley appeared to be going back toward the city, but instead turned into the adjacent Village Mobile Home Park.

Stover came out of the Woodlands and joined the chase into the Village. Eggert and Seekins were in one car, Stover in another and Ritchie was in the K-9 SUV with Blesk, his K-9 partner.

It was snowing so hard there were nearly whiteouts and Kanalley disappeared on one of the side streets — but he quickly re-emerged.

“As he turned I could see flashes coming through his windshield,” Seekins said. “I yelled, ‘get out.’ My cell got shot. It was on the dashboard.”

The bullet-propelled cell phone hit Seekins as he was getting out. The phone took a bullet on the No. 7 key, but still worked. “How I never got shot, I’ll never know,” Seekins said. The bullet holes in the windshield indicated Kanalley’s bullets would have hit the new detective lieutenant in the throat.

While Seekins was running for cover behind the patrol car, Kanalley slammed the car door with his bumper. At the same time, Eggert was hit by a bullet while escaping out of the passenger door.

Ritchie recalled, “I saw headlights coming at me and there were gun shots. He was shooting at Scott Seekins and Larry Eggert’s car. They bailed out and went to cover. He was blasting away and I ducked down. He rammed my car head on.” The collision broke Ritchie’s jaw and he lost several teeth.

Kanalley, who had removed the stock from his AK-47, was resting the gun on the dash and shooting through his windshield.

“He wanted to go out in a blaze of glory and take a cop with him,” Ritchie said.

Ritchie hoped to take cover, but was hit by bullets coming through the windshield as he laid across the seat. “The shot went through my lung and I couldn’t breath. I laid on the ground and played dead. I was trying to catch my breath. I couldn’t breathe.”

Ritchie sustained three gunshot wounds, two in the legs and one in the chest. Remarkably, the German shepherd Blesk was unharmed.

Seekins kept firing and tried to get help for his friends. He was unable to retrieve his shotgun from the car and was armed only with his handgun. “One of my rounds hit him in the foot, put him down,” Seekins said.

“At this point the calvary was coming,” Ritchie said. “(Kanalley) was getting nervous and went into the wooded area.”

Among the “calvary” was Sheriff’s Deputy Sgt. Kevin Mack. He was pulling into the trailer park when he heard the words on his police radio: “Officer down.”

A year after the encounter, Mack recounted what happened next. First, he threw a set of road spikes across the entrance and began his approach with his patrol car’s lights turned off.

Soon, he saw a “single subject” walking about 50 yards from the scene. Kanalley then turned and fired his assault rifle.

“He disabled my patrol car with the second shot,” Mack recalled. The deputy threw open his door, reached his hand out on the windshield and ducked down, firing nine rounds.

Kanalley dropped to the ground. “I’m thinking, naturally, ‘I hit him.’ “ Mack, who had never before fired his gun except in training, said.

After all the gunplay, Kanalley pointed his AK-47 to his own head and fired. But before killing himself, Kanalley had words for Seekins.

The detective wasn’t proud of hitting Kanalley in the foot. “We aim to terminate the threat,” he said.

The South Lockport Ambulance was on the scene waiting to transport the injured officers. On the way to Erie County Medical Center, Ritchie was said to have died four times and was resuscitated. “They were just squeezing bags of blood in me,” he said. “The doctors were surprised I was able to survive,” he said.

One of his legs was nearly blown off, the other leg had a broken bone. One shot severed nerves in his arm. It’s something Ritchie deals with every day. Each year it gets a little worse, he said.

Eggert and Ritchie were treated at the ECMC intensive care unit. Ritchie was in intensive care for a week and spent five weeks in the hospital. Rods were installed in his legs, and he spent nearly a year and a half in intense therapy.

At Officer of the Year ceremonies, Eggert said, “Without Scott being there, I’d be dead, and so would Steve. I mean, he threw himself down between me and Jason. If there’s a hero out there, it’s Scott, even if he doesn’t like being called one.”