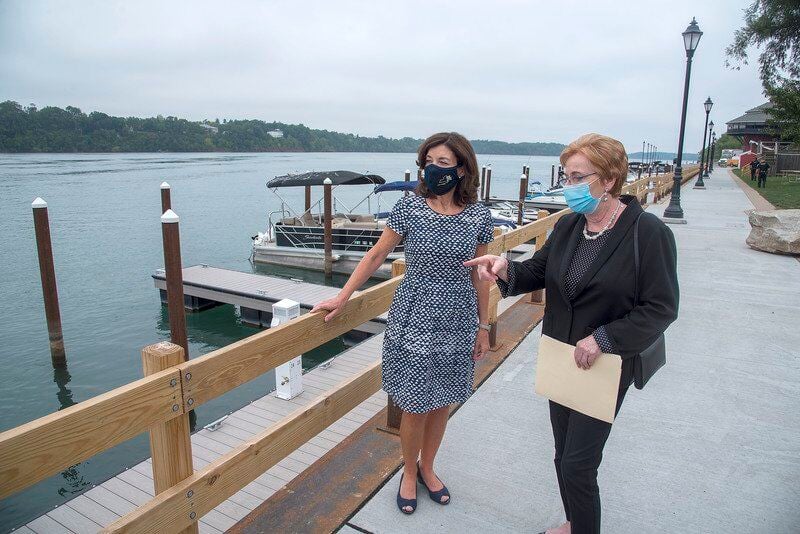 Lt. Gov. Kathy Hochul gets a tour of the revamped Lewiston Landing waterfront from Village of Lewiston Mayor Anne Welch. 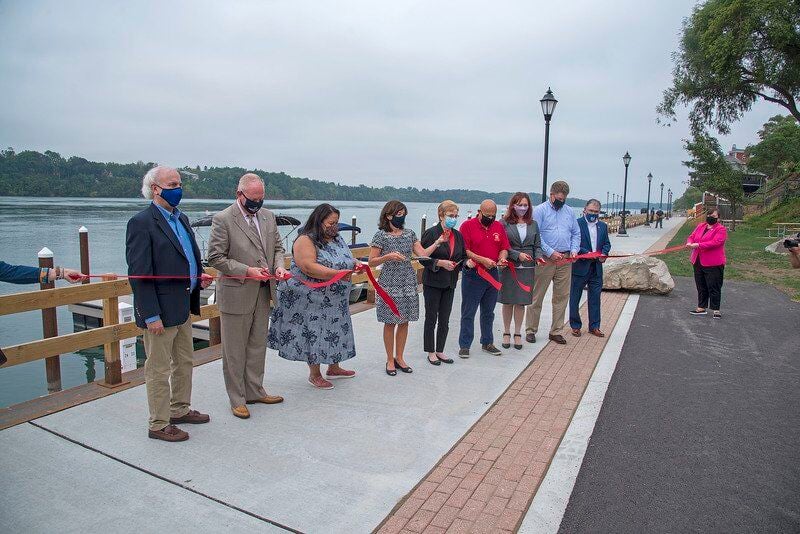 Lt. Gov. Kathy Hochul joined Lewiston Mayor Anne Welch and other state and local officials for a ceremonial ribbon cutting to mark the completion of the $1.2 million resiliency project improvements at Lewiston Landing on the Niagara River.

Lt. Gov. Kathy Hochul gets a tour of the revamped Lewiston Landing waterfront from Village of Lewiston Mayor Anne Welch.

Lt. Gov. Kathy Hochul joined Lewiston Mayor Anne Welch and other state and local officials for a ceremonial ribbon cutting to mark the completion of the $1.2 million resiliency project improvements at Lewiston Landing on the Niagara River.

LEWISTON - Lt. Gov. Kathy Hochul got an up-close look at recent improvements to Lewiston Landing during a visit to Niagara County on Wednesday.

Hochul joined local and state officials on a tour of popular shoreline site, which received $1.2 million worth of improvements under the state's Resiliency and Economic Development initiative. The improvements at the waterfront destination included new shoreline stabilization measures designed to protect the area from future flooding as well as the installation of new floating docks, a new pathway with railings, improved lighting and power stations.

The REDI program was developed by Gov. Andrew Cuomo's administration in response to damage caused by flooding along the Lake Ontario shoreline in recent years. Lewiston Landing is one of the several locations to be targeted for assistance under the program.

"New York has a special responsibility to be stewards of the Great Lakes and protect them for the people who live in these communities and the businesses that operate here," Hochul said. "While waterfront communities along Lake Ontario and the Niagara River have faced tremendous challenges in recent years, New York is helping them build back better, smarter and more resilient than before. Today's completion of improvements at Lewiston Landing - the main access point for many waterfront activities and the only public site within the village that provides direct access to the Niagara River - will protect it from future high-water events and ensure that it remains a place of enjoyment for future generations."

Much of Lewiston Landing became submerged during the storms of both 2017 and 2019, due to elevated Lake Ontario water levels and rain, which also increased the elevation of the Niagara River water. During these events, the combined effects of flooding and waves action severely impacted Lewiston Landing.

At Cuomo's direction, the state's REDI commission toured areas hard hit by flooding on Lake Ontario and worked with local communities like Lewiston to come up with a new vision for the shoreline from both a resiliency and economic development point of view in order to build back better and stronger for the future. Cuomo's office noted that the group developed a package of actions - ranging from legislative changes to aid packages to executive actions - that will be able to withstand whatever Mother Nature has in store. Part of the plan includes ways to harden public facilities and enhance natural features such as living shorelines and sand replenishment on the Lake Ontario waterfront.

The Lewiston Landing project was undertaken by the Village of Lewiston with assistance provided by the New York State Department of State. The project raised the Landing above 252 feet and stabilized the shoreline to become more resilient to the forces of future high water events, and also installed new floating docks which will rise and fall adaptively in response to changing water levels and local river conditions.

The project also included the reconstruction of the public esplanade to facilitate access to several existing facilities along the waterfront and replacement of existing boat docks with floating docks. To further improve visitors experience and safety, the project included construction of a new landing/pathway with railings and lighting, as well as installation of new electrical outlets and service lines for the site.

Lewiston Mayor Ann Welch credited the partnership with the state with "re-imaging and rebuilding" the Landing.

"Through this partnership with the state we were able to make vital improvements to the shorelines," she said. "These improvements including the addition of floating docks will ensure that the landing remain open even during times of high water, allowing both local residents and visitors from across the state to continue to enjoy the jewel of the village."