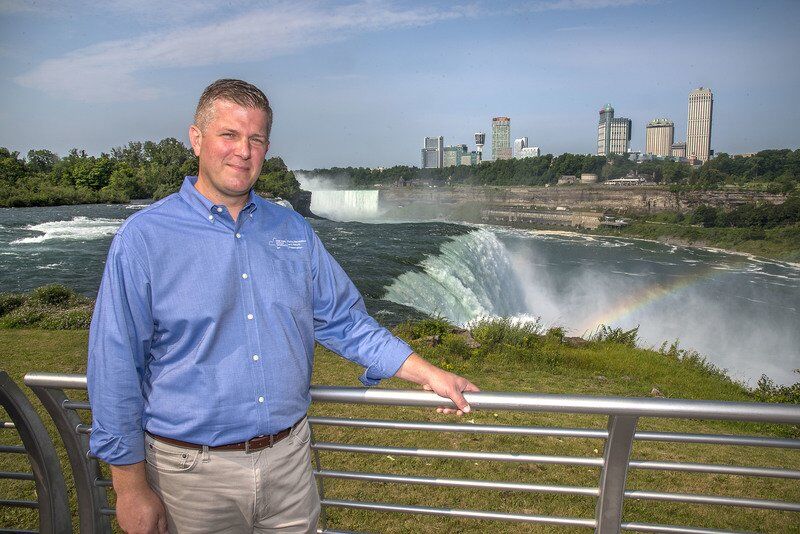 James Neiss/staff photographerVince Iacovitti has a great view of the assets he supervises near from his new office on Goat Island. 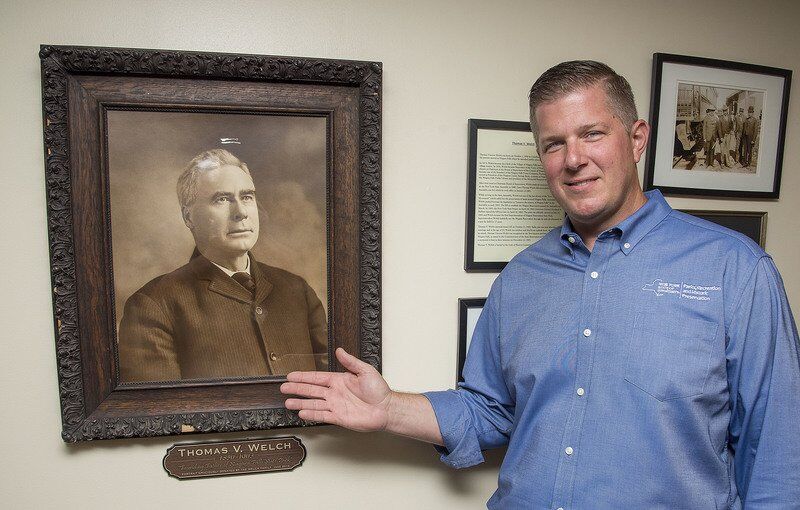 James Neiss/staff photographerVince Iacovitti has a great view of the assets he supervises near from his new office on Goat Island.

In 1996, at the age of 16, Vince Iacovitti took tolls at the Joseph Davis State Park booth. He hasn’t stopped working for New York State Parks since.

Iacovitti is a Niagara Falls resident and supporter. He lives in LaSalle with his wife Evyn and their children, Anneliese, 23; Vincent, 18; Alyssa, 17; and Anthony, 5. Evyn is an environmental analyst with state parks. The family this year celebrated graduations from grad school, high school and pre school.

While the rest of the administrative staff is headed for new headquarters in DeVeaux Woods so the current administrative building adjacent to the visitors’ center can be put to better use, Iacovitti is headed for an office in the carriage barn on Goat Island. It is better for the person in charge to be close to the action.

Thursday was the 136th anniversary of the State Park. The original director, Thomas Vincent Welch, was the only Niagara Falls native besides Iacovitti to hold the position and he’s been gone for more than a century. His portrait hangs on a conference room wall. If you believe in serendipity. the new park director's given name is Vincent Thomas Iacovitti.

Iacovitti’s Falls domain includes the state park, all its buildings as well as the gorge trails from Devils Hole to Whirlpool.

Sitting on Goat Island for a newspaper interview, the immense masses of people wandering are a sight to behold, everything from Mennonites to Asian tourists and even Tibetan Monks.

Iacovitti said he celebrates Niagara Falls the city as well as the park because it is a hub of diversity.

“My son just graduated from Niagara Falls High School,” he said. “At his graduation, the Valedictorian talked about the value of growing up in Niagara Falls because it prepares you for life. You can do anything.”

Iacovitti’s father, also a Vince, retired after 40 years as a major with the Park Police. That means the new park director has been on the site or nearby his entire life.

Today, the staff is at about 100 permanent and 300 seasonal. A crew of six works on the gorge trails all summer long. Trail building is hard work, Iacovitti said.

“By the end of the summer, they are really buff,” he said.

Western District Parks Director Mark V. Mistretta is excited to have a new manager in the previously vacant post.

“I am so proud of Vince for achieving this position and I have the utmost confidence that he will be a dedicated leader and caretaker of this flagship park," he said. “This must be special for him and his family and I am so glad to be witness to his success.”

Covid brought a huge increase in foot traffic because of people not being able to travel or visit Canada. The state estimates it has 9 million visitors a year.

Iacovitti said the numbers are calculated with a consistent methodology, “It’s not like Disney. We don’t have turnstiles and fences.”

After he started with Parks, Iacovitti apprenticed and became a union electrician. Eventually, he turned back to the white collar side of the business.

Iacovitti sees Niagara Falls taking a big step forward. Thanks to Niagara USA and the cooperative efforts of the state and city.

“When parks were opened after Covid, people were able to return,” Iacovitti said. “They could rent a shelter, roll down a hill, run up a rock, whatever they wanted. It is a great time to be here.”