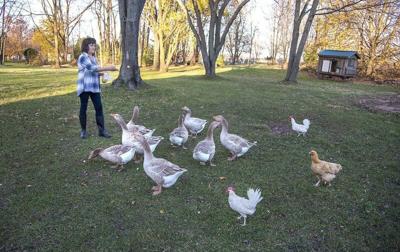 EDITOR'S NOTE: This is the second story in a three-part series from contributing writer Jim Shultz.

On a cold evening last November my wife and I joined more than 200 local residents who packed the Hartland fire hall in Gasport to learn more about the proposed, giant (2,000-acre / 350 megawatt) Ridge View Solar project. The meeting was hosted by a citizens group, Protect Our Rural Communities. The featured speaker was a man named Charlie Fendt, an emergency management consultant from Rochester who is a fierce critic of solar power and has promoted himself as an expert.

Mr. Fendt issued one dire warning after another. The electrical storage batteries required on large solar fields carried the explosive risk of a large bomb. Terrorists might even attack the batteries with killer drones to set them off. If the panels caught fire, he said, they would release dangerous toxic fumes into the air. The same local hail storms capable of taking out a whole crop of apples could also pummel the glass panels into tiny shards that would leave the land unfarmable far into the future.

These charges only reinforced local suspicions about the project. Some opponents of the proposed Lockport solar field have raised similar safety concerns as well. But what are the facts?

Home solar systems like mine, and small scale projects like the one proposed on Summit Street, don’t have batteries or energy storage. They feed the electricity they produce directly into the power grid that everyone draws from. Giant industrial fields, however, like the ones being proposed in Hartland-Newfane and Cambria-Pendleton, likely will have large on-site batteries, because they generate more electricity than the grid can sometimes take in. The surplus power gets stored in batteries on-site to feed into the grid when it is needed.

POWER PLAY: Behind the solar push(back) in Niagara County

EDITOR'S NOTE: This is the first story in a three-part series from contributing writer Jim Shultz.

Analysts who study the solar industry say incidents of battery fires are rare events. But that does not mean there have not been incidents. The most famous was last year in Arizona, where batteries at an energy storage facility caught fire and injured a team of firefighters. A spokesman for the Ridge View project says this was an example of one poorly built system and not representative of energy storage as a whole. Experts in battery safety say that it is important that systems be equipped with early warning tools that are able to detect the potential signs of a battery failing.

Similarly, incidents of panels catching fire are also tied to specific manufacturer errors, rather than any widespread risk. Walmart filed a lawsuit last year against Tesla and Solar City for what it says were fires caused by faulty solar panels. In actuality, where solar panels have been involved in fires, it is because roofs caught fire, not the panels themselves, which are encased in hardened glass. Here as well, safety depends on the panels being well-manufactured and having government regulators who keep a close eye out for risks.

The debate over large scale solar projects in Niagara County has mostly focused on the issues of safety and aesthetics. What has gotten much l…

The hail damage charge, on the other hand, appears to be pure myth. In Denver, an array of 3,000 panels was pummeled with hail so hard it shattered car windows nearby, but the only impact on the solar project was that a single panel suffered micro-cracking on its hardened glass surface.

The other concern that people express is not about safety but whether giant solar projects like these will fundamentally alter rural communities. What does it mean to take huge swaths of agricultural land and turn them into solar fields?

To fully appreciate the massive scale of the Ridge View project, think of the Lockport Nature Trail on Slayton Settlement Road and now imagine an area 20 times that size. It would be among the 10 largest solar fields in the United States.

Supporters say this does not mean that the developer, EDF Renewables, will erect one single mammoth field of panels (equal in size to 1,500 NFL football fields). Its 2,000-acre footprint would be spread across sites on 40 different farms, ranging in size from 50 acres to 900.

I spoke with two local farmers who I know and respect and they offered differing perspectives on what this would mean for their community.

Mindy Vizcarra is the owner of Becker Farms in Gasport. She is a supporter of the Ridge View solar project and her farm is one of those slated to be a part of it. She explained to me that a 50-acre plot of her 340-acre farm, currently leased out to grow hay, would be leased over for 40 years to the solar project. She says the array would be in the middle of her land, closed off behind a chain-link fence and shielded from view by bushes and a raised strip of land known as a berm.

In Becker Farms’ case, she said, the area around the solar panels would be planted with native wildflowers to create new pollenating lands for the threatened bee population. A similar pollenating plan would be part of the Lockport solar field as well.

Mindy sees the project as an opportunity to contribute to a cleaner energy future. “We are taking a stand and being a part of the solution,” she said.

In Middleport, Margaret Darroch is also a farmer, and a member of the Hartland Planning Board. Her hesitations about Ridge View began with what she says were serious misrepresentations to the community by the company. “They told us that it was just 10% of our agricultural land. It’s 27% of our agricultural land,” she said. “Nobody is against solar. It’s the size.”

Margaret believes that the mammoth project, which would involve two years of heavy construction, would have a huge impact on the land we rely on to grow food and raise animals.

“You can’t just drive big equipment and put up concrete blocks on top of soil and have it be OK. To take such a rich area and use it for this purpose makes no sense to me.”

Margaret also questions company promises that the land around the panels can still be used for agricultural purposes, such as raising sheep. “Where are all those sheep going to go in the winter?” she asks.

I asked Kevin Campbell, a spokesman for EDF Renewables, why its project has to be so large. He explained that one of the reasons his company picked Hartland was because it can hook directly into the large capacity electricity transmission lines built to serve the electric generation station in Somerset. Without the huge generating capacity from 2,000 acres, he said, the connection to those power lines would be far more expensive.

I also asked why the company wants to site the project on agricultural land instead of on some of the contaminated brownfields in Niagara County. Campbell said they hadn’t looked into it.

Jim Shultz is a regularly contributing essayist in the Niagara Gazette. He’s also the founder and executive director of the Democracy Center. Contact him at: JimShultz@democracyctr.org.

Solar energy production is knocking on our door in Niagara County and this is the second of three articles aimed at deepening the public’s understanding about the solar future being proposed here and what it could mean, for all of us. Visit our website at www.niagara-gazette.com for part one.

COMING SOON: A look at the economics, that is, “the money part” of solar deal-making.