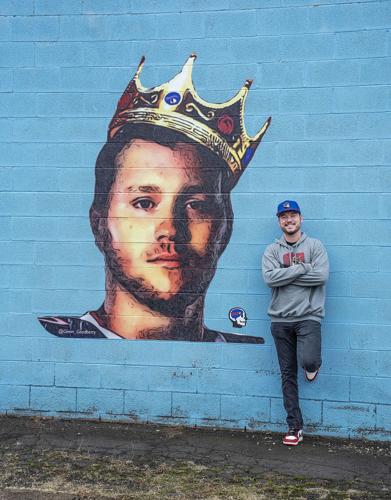 Artist Glenn Goodberry of the Town of Niagara with his artwork featuring Josh Allen of the Buffalo Bills titled “King of Buffalo,” on the wall of Rich’s Expert Door Service at the corner of 24th Street and Allen Avenue in Niagara Falls. 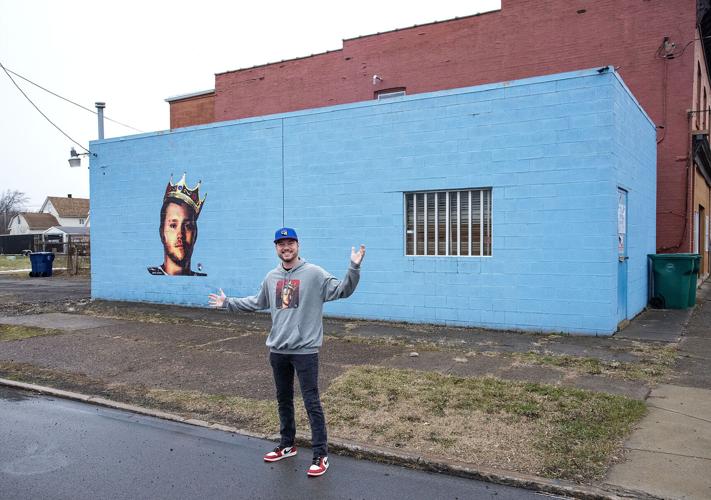 Artist Glenn Goodberry said he drew inspiration of his Josh Allen mural as a king concept from the late rapper Notorious B.I.G.

Artist Glenn Goodberry of the Town of Niagara with his artwork featuring Josh Allen of the Buffalo Bills titled “King of Buffalo,” on the wall of Rich’s Expert Door Service at the corner of 24th Street and Allen Avenue in Niagara Falls.

Artist Glenn Goodberry said he drew inspiration of his Josh Allen mural as a king concept from the late rapper Notorious B.I.G.

Josh Allen’s likeness has been popping up on buildings, in store windows and at street corners in Buffalo and other communities across Western New York as the Buffalo Bills quarterback has continued his journey from promising rookie to one of the premiere players in the NFL.

Thanks to a local artist, a building owner and a Buffalo company, the City of Niagara Falls is now in on the public celebration of all things Josh.

Local artist Glenn Goodberry and property owner Paul Kudela, with help from a firm in Buffalo called Zoom Buffalo, teamed up to produce a mural honoring “King Josh” on the side of a building owned by Kudela at the corner of 24th Street and, fittingly, Allen Avenue in the city.

The artwork — which depicts Allen wearing a king’s crown — was created by Goodberry, a 38-year-old Falls native and digital artist.

A fan of hip-hop music, Goodberry said he drew inspiration of his Allen as a king concept from the late rapper Notorious B.I.G. who became known in music circles as the “King of New York” after the 1997 release of an enduring portrait that showed Biggie wearing a crown in front of a red satin background.

“There was a big bicker about who was the only team in New York,” Goodberry said. “The Buffalo Bills, right. Josh Allen was being talked about as the ‘King of New York’ so I referred to it as ‘Josh Allen, King of Buffalo.’”

Kudela, a Niagara Falls School Board member and police officer who comes from a long line of diehard Bills fans, contacted Goodberry and suggested they work together to turn “King Josh” into a mural.

“I went on his Facebook and I saw that design and I really liked it,” Kudela said.

Kudela inherited the building from his father, Rich, who used it as a storage spot for his business, Rich’s Expert Door.

The location — on Allen Avenue — seemed like a great fit, according to Kudela who wanted to put together some type of public art recognizing Allen whose likeness has been used to add a little Bills flavor to places like Allentown in Buffalo. Last October, Hertel Avenue in Buffalo was dubbed “Hurdle Avenue” in recognition of Allen’s penchant for leaping over defenders. A cut-out of Allen leaping over Chiefs defender Justin Reid accompanied the name change.

Kudela said a friend of his, Rory Allen, owns Zoom Buffalo, a company that specializes in turning pieces of art into murals.

“I said ‘wait, I have a building at 24th Street and Allen Avenue.’ I thought ‘why don’t I reach out to him and see if we can put a mural of Josh Allen up on the building.’ He said ‘find a picture and we’ll put it up.’”

In the weeks since the mural has been in place, both Goodberry and Kudela said it has drawn a lot of attention, mostly from Bills fans who have stopped by to have their pictures taken next to it. A video showing the image that Kudela posted to Facebook has received more than 10,000 views so far.

Kudela said his 5-year-old son, Ryan, is a big fan, the latest in a long line of Kudela family members, including his father and uncles who were all diehard Bills backers.

“I’m sure he would love it if he could see it now,” Kudela said, referring to his late father.

On Facebook, Kudela has had some fun at the expense of fans of the Miami Dolphins, the Bills opponent in Sunday’s AFC Wild Card game. He photoshopped pictures of some of his friends who are Dolphins’ fans next to the “King Josh” mural as a reminder to them that Allen is the true ruler of the AFC.

He said the back-and-forth between the two sides has been going on for years and his idea for heckling his pro-Dolphins buddies started weeks before he knew the two teams would be meeting in the first round of the playoffs.

“It’s all just a joke and for fun. They all laughed about it,” he said.

Goodberry, who is also a lifetime Bills fans who recalls the pain of the team’s four straight Super Bowl losses in the early 1990s, said he believes Allen is the perfect fit for Buffalo because, coming out of college, he was not considered the top quarterback in the draft. In the years since the Bills picked him, Goodberry said he has proven a lot of doubters wrong on the field.

He said Allen’s play has drawn a lot of positive national attention to the team and the community that has not been seen since the days when Jim Kelly was leading the team at quarterback.

“He represents Buffalo with his faith, humanity, humility, willingness to do everything he can to win and I think it really resonates with people a lot,” Goodberry said, referring to Allen. “I think that’s what he means to the community and on top of that he ‘s winning football games.”

Goodberry has been dabbling in art and more recently digital art for years. His portfolio includes several other Buffalo and football-inspired pieces, some of which have been placed on T-shirts, hats and other items. Goodberry also has a website under Redbubble, an online art marketplace that helps artists sell their products. The site can be found at www.redbubble.com/people/OneNineApparel/explore?page=1&sortOrder=recent.