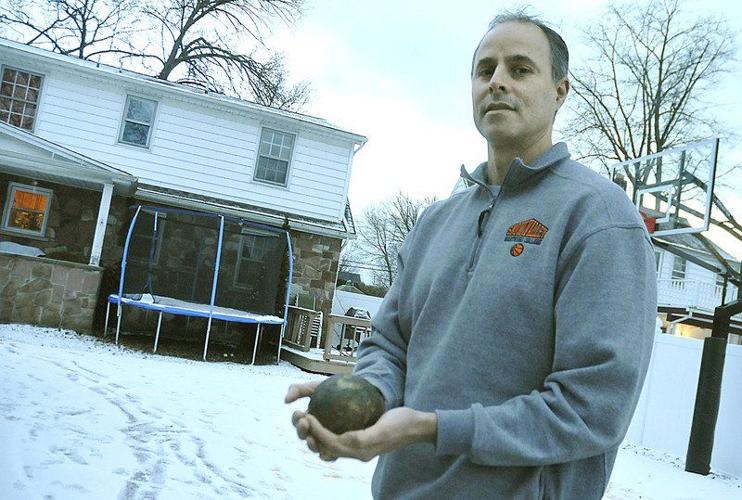 Dan Cappellazzo/staff photographerNiagara Falls High School history teacher Mike Esposito holds the cannonball that was unearthed from his backyard. He thinks it may have been fired from the famous ship Griffon over 400 years ago. 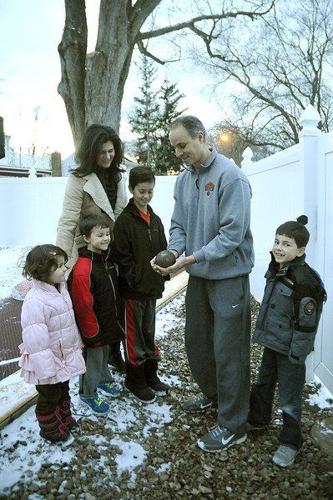 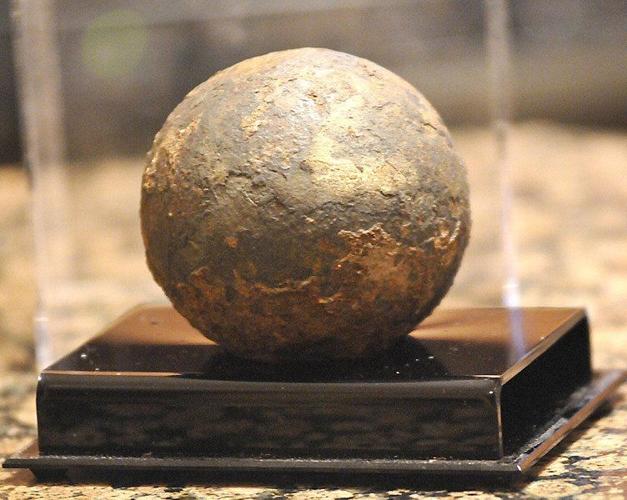 Dan Cappellazzo/staff photographerThis is the cannonball unearthed from the yard of Mike Esposito, Niagara Falls High School history teacher. Esposito thinks the ball may have been fired from the famous ship Griffon more than 400 years ago.

Dan Cappellazzo/staff photographerNiagara Falls High School history teacher Mike Esposito holds the cannonball that was unearthed from his backyard. He thinks it may have been fired from the famous ship Griffon over 400 years ago.

Dan Cappellazzo/staff photographerThis is the cannonball unearthed from the yard of Mike Esposito, Niagara Falls High School history teacher. Esposito thinks the ball may have been fired from the famous ship Griffon more than 400 years ago.

Annie Esposito was making lunch for her kids last summer when a fence company crew working in her back yard found an old cannonball.

Perhaps in the commotion, because she was too busy to respond with much attention to their find, the crew left with it packed in their truck. It was a week later when the busy mom of four and one-on-the-way remembered to tell her husband about the cannonball. Suffice to say, he recaptured that old spent ammo, pronto.

Her husband, Mike Esposito, a Niagara Fall High School history teacher, was elated over the find.

The ball was found near the construction site where, more than 400 years ago, many believe a European ship, the Griffon, was built on Cayuga Island. Esposito believes the ball came from that ship.

“I read somewhere that the Griffon fired five shots before leaving the area,” said Esposito.

Former city historian Paul Gromosiak is encouraging Esposito because he also believes the cannonball is from the Griffon. He enjoyed sharing the boat’s history via a telephone interview recently, and said that as the boat was being built in 1649, the local Senecas were watching suspiciously.

“The French were nervous the whole time they were constructing the boat,” Gromoziak said. “They couldn’t go further down river. They didn’t want to be too close to the falls.”

Gromosiak said the Cayuga Island location was a good place to build the Griffon because the island was protected from storms and the ship was close to the water in case the native Americans became too hostile.

“Chances are the cannonball that Esposito found could be once of those cannonballs,” Gromosiak said. “I’m convinced of it.”

Esposito believes the cannonball is just the type of three-dimensional show-and-tell piece that might spark some excitement in his classes over this area’s most renowned history. The ship was built in 1679 at the behest of the famous French explorer LaSalle, officially known as René-Robert Cavelier, sieur de La Salle,  whose name has been forever linked to the Cayuga Island/Buffalo Avenue region of the city called “LaSalle.”

Unfortunately, the history teacher has been trying for eight months to get someone else to help him determine the origin of the cannonball. No one he has contacted seems much interested in trying to help him. An expert on military antiques says the lack of interest is pretty common.

“Generally speaking, if you have a cannonball, that’s about the response you get,” said Craig Gottlieb, a military antiques expert who appears occasionally on the cable show “Pawn Stars.”

Gottlieb, contacted by the Gazette at his home in Solana Beach, Calif., said there’s only one thing that appeals to historians, collectors and antique dealers — hard evidence.

“A cannonball’s worth something, maybe a few hundred bucks,” Gottlieb said, “and that’s what it’s going to be worth until a person can connect it with a locked-tight story.”

Still, the history teacher — who by coincidence lives with his family on Griffon Avenue — is learning a good deal about the sailing ship, infamous because it was the first European boat to sail the Great Lakes and because adventurers and archeologists are still trying to find where it sank.

Among those shipwreck hunters, Esposito did manage to find one guy as obsessed as he is with the Griffon.

He contacted Steve Liebert of Northern Michigan, who has spent more than $1 million of his own money trying to find the ship, which Liebert believes sank in Lake Michigan.

The Michigan man, a retired defense department employee, has been transfixed by the idea of finding the French ship since he was 14 years old and heard a history teacher talk about LaSalle and his missing boat, the Griffon.

“He put his right hand on my left shoulder, and said ‘who knows, maybe one of the people in this room will find it one of these days,’ “ Liebert recalled in a recent phone call, saying he moved from Ohio to Michigan because he’s been looking for that boat almost ever since.

Liebert, who believes he and his team have found a part of the Griffon, has spent eight years in court trying to get legal permission to go down into the deep, cold waters and investigate. The litigation has involved the state of Michigan, the U.S. government and France, which has rightful claims to the boat if Liebert can prove it’s the Griffon.

The shipwreck hunter has called the Griffon the “Holy Grail” of sunken ships.

“That ship is one of the major reasons the U.S. today is a superpower in the world,” Liebert said.  He explained that after the ship disappeared, LaSalle went on to explore and claim the Louisiana Territories for France, which later sold them to the U.S. for $15 million so Napoleon Bonaparte could fund his wars in Europe.

“Since that purchase, the U.S. has never looked back and became a superpower,” Liebert said. “All because of that ship and LaSalle.”

But, even Liebert is not all that interested in Esposito’s cannonball, as his time is taken up with having located, beneath Lake Michigan, a piece of what he believes is the Griffon. He is certain it will prove to be part of the Griffon when his team has a chance to excavate the piece.

Unless they can find the ship and other cannonballs that have the same composition, there’s no way to prove the ball that Esposito found was one of the five fired from the ship.

“I highly suggested to Mike that he take the cannonball to a lab at any university, to analyze the metal content,” he said. “They can probably also tell you if the cannonball was actually fired.”

But Gottlieb, the military antiques expert, says he would wait if he were Esposito.

“My instinct is that a lab test wouldn’t find conclusive information that would give you certainty you have a cannonball from that ship,” he said.

Meanwhile, Esposito, who is also the girls basketball coach at the high school, continues his quest with an athlete’s perseverance, determined to learn more about his backyard find.  He has calls in to the University at Buffalo’s archeology department and is hoping to talk soon to an expert in San Antonio, Texas, and another in Toronto. He plans to keep the ball safely tucked away in a secure location, just in case it has value.

He’s also hoping that, as the word gets out about the cannonball, more people will join his quest to uncover the details of its history.