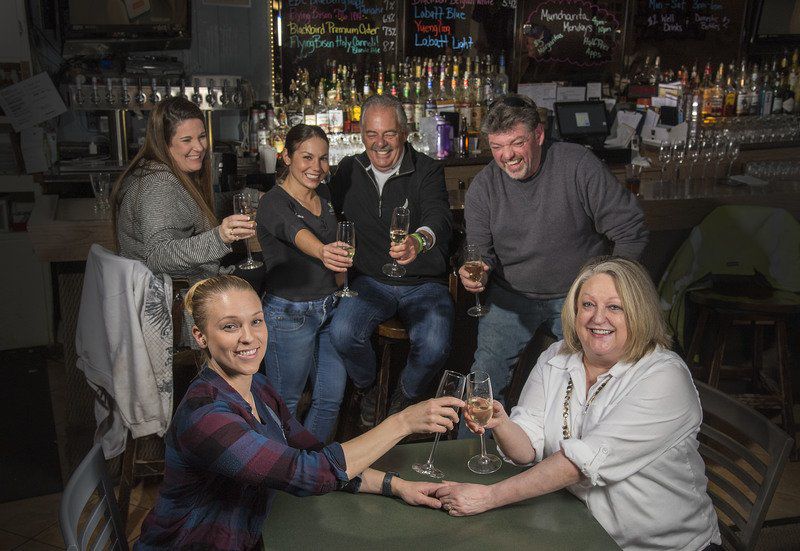 Judi Justiana of Judi's Lounge Bar & Grill, right, gets a toast from her daughter Maria Justiana, left, along with staff and patrons as they celebrate the 40th anniversary of the business at 2057 Military Road. 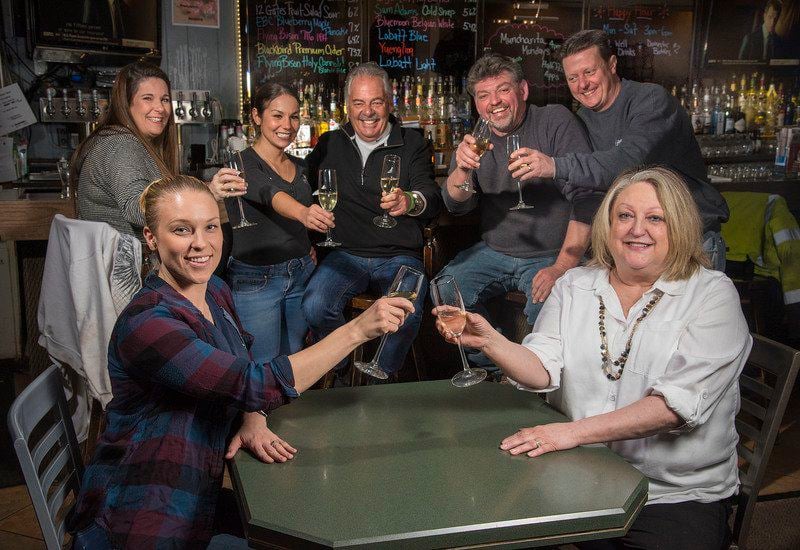 James Neiss/staff photographerJudi Justiana of Judi's Lounge Bar & Grill, right, gets a toast from her daughter Maria Justiana, left, along with staff and patrons as they celebrate the 40th anniversary of the business at 2057 Military Road.

Judi Justiana of Judi's Lounge Bar & Grill, right, gets a toast from her daughter Maria Justiana, left, along with staff and patrons as they celebrate the 40th anniversary of the business at 2057 Military Road.

James Neiss/staff photographerJudi Justiana of Judi's Lounge Bar & Grill, right, gets a toast from her daughter Maria Justiana, left, along with staff and patrons as they celebrate the 40th anniversary of the business at 2057 Military Road.

Judi Justiana's business has always been more than just a bar to her and her family.

Her place, called Judi's Lounge Bar & Grill, is where her friends gather, some of whom are employees and many of whom are loyal customers whose continued support has kept the business strong for 40 years of unexpected success.

Judi recalls how she and her husband said to each other before they bought the bar, "We’ll open this business and in five years figure out what we’ll do with the rest of our lives. And here we are 40 years later," she said this past week during an interview at her bar and restaurant at 2057 Military Road.

“We never thought we would do as good as we did,” she said.

Not that it hasn't been a long road. Judi and Tom Justiana met when he was a Niagara Falls police lieutenant and she was bartending at The Piccadilly on Military Road.

"She was probably the best I've ever seen behind the bar," Tom said proudly of his wife. When they started dating, he told her that if she was going to stay in the bar business, she should probably have her own place. They found a very small place on Military Road which had been a paint store and it seemed just the right size for Judi.

They are still grateful to John Prozeralik, owner of John's Flaming Hearth restaurant who Judi once worked for, because he stepped in to help the couple secure a loan from the Small Business Administration at a time many bars in the region were going out of business.

A local businessman bet Prozeralik a steak dinner that Judi's would fail. Thankfully, Bo Erias, a retired pro basketball player who was a loan officer at M&T Bank, had their backs and they were able to get enough money to open Judi's Lounge.

When the doors opened, Judi worked day and night, coming in early to clean and order supplies and then working the bar from 11 a.m. to 2 a.m.  The pace continued through the birth of her son, Michael in 1985, who is now a French teacher in Warwick and her daughter, Maria, in 1988.

Judi remembers she was rocking baby Maria when Tom came home from his job on the police force one day and told her about an opportunity to buy a bar she used to work at in Lewiston. The couple made the leap and Judi changed the name of the place to Tin Pan Alley.  Then, after working both businesses for several years, she asked Tom to retire and help her out. He retired as a captain after 26 years in the department, but when he realized that he had exchanged one job for another, they sold Tin Pan Alley and returned their sole attention to Judi's Lounge.

"This place is still here, 40 years later, not because of anybody but her," her husband says. "It almost killed her."

He recounted a time in 2004, when Judi had open heart surgery and an allergic reaction to a drug called Heparin kept her in the hospital near death for several months. Doctors said that if she survived, she might lose a limb, but she was lucky and recovered.

"It was a happy ending. I pulled through it and I have all my limbs, which is unusual," Judi said.

Why do her employees stick around for so long? “Because of her,” Tom said.

“I’m a pretty good boss,” Judi added, laughing. These days, she's basically retired, but jokes that she shows up often to "boss people around."

Of retirement, she says, "I'm loving it," smiling at her daughter, Maria, mother of Laila 2, and Elliana, 5 months. "We're very much in love with our granddaughters," Judi said.

Maria, has taken over management of the business, with her fiance' Chris Cheff, who works the kitchen. The young couple have dreams of expanding the place, but hope to keep the neighborhood bar atmosphere. That's why, when renovations freshened up and expanded the bar and restaurant two years ago, the pool table was left in place just steps from the bar.

"We haven’t gotten rid of the pool table yet," Judi said. "We want to make sure it's always going to stay a local neighborhood place. We don’t want to ever lose that."

Judi says Maria is "a natural" for the business and keeps coming up with new and better ways to run Judi's, including computerization. As such, loyal customers continue to enjoy a friendly environment, an expanded menu and Judi's very popular chicken wings.

One long-time customer, Lisa Sveda, who works in maintenance at the Niagara Falls Air Reserve Station, called Judi's "my favorite place to come to."

Sveda said that when out-of-towners come to the air base and want to try local food, she always sends them to Judi's Lounge. "I tell my friends I’ve never had a bad meal here."

The 40th anniversary will be celebrated on Facebook, where a Judi's Lounge Bar & Grill event page will feature photos and memories with pictures dating back to 1980.Customers are being asked to share their photos and stories there as well. There will also be food and drink specials with "throwback prices," throughout February.