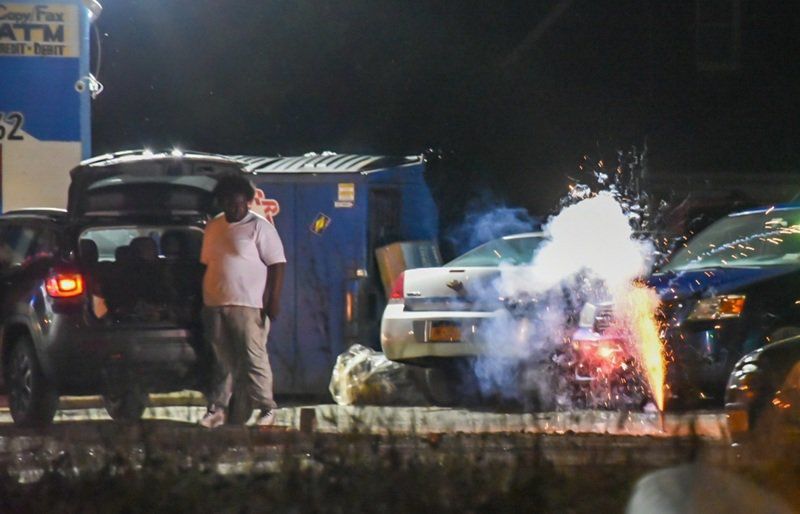 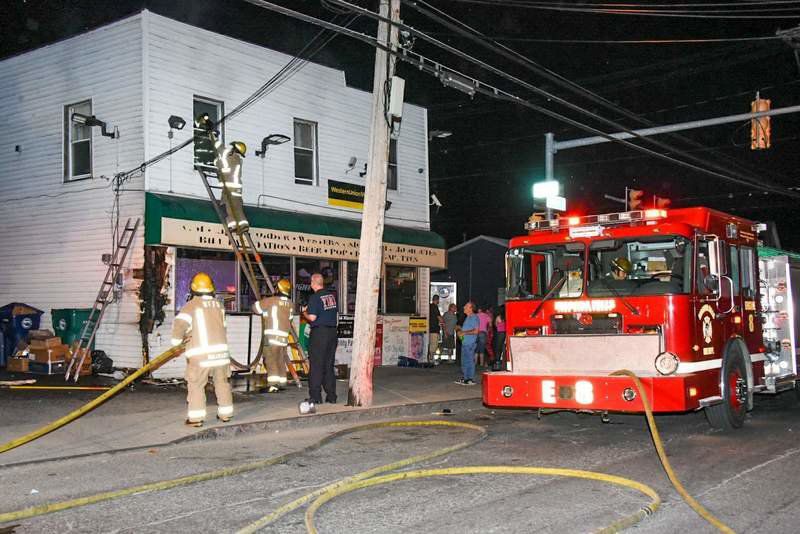 Photo by RobShotsNiagara Falls firefighters battle a blaze in a convenience store at the corner of 19th and Niagara streets on June 19. The fire was blamed on the illegal use of fireworks. 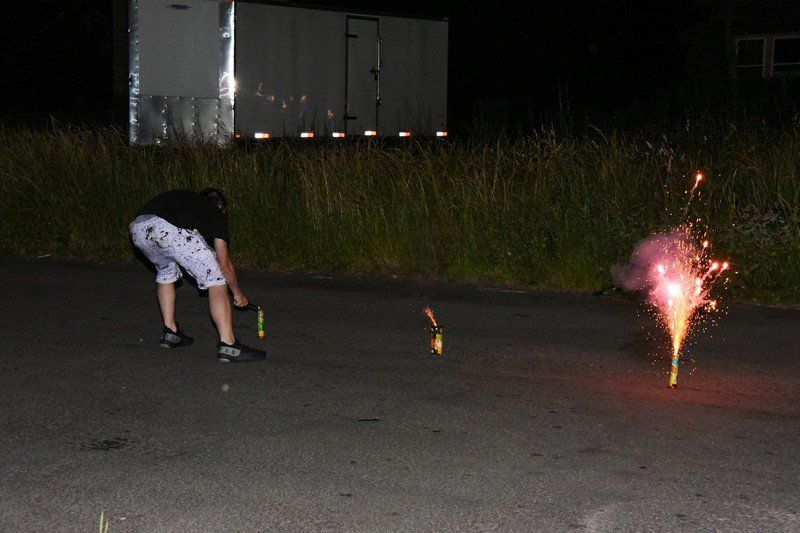 A Niagara Falls resident sets off what appear to be Roman candles on the 400 block of 20th Street on Friday night. Niagara Falls and cities across the country have been plagued by a skyrocketing number of complaints about the illegal use of fireworks.

Photo by RobShotsNiagara Falls firefighters battle a blaze in a convenience store at the corner of 19th and Niagara streets on June 19. The fire was blamed on the illegal use of fireworks.

A Niagara Falls resident sets off what appear to be Roman candles on the 400 block of 20th Street on Friday night. Niagara Falls and cities across the country have been plagued by a skyrocketing number of complaints about the illegal use of fireworks.

It's not the Fourth of July yet, but you might not know that from the sound of fireworks that have been exploding for weeks in the Falls.

The Cataract City, like many other cities across America, has been plagued by an almost nightly rash of complaints about the illegal use of fireworks and the resulting inconvenience of booming noise at times when many folks are trying to get a good night's rest.

"Oh yeah, come over to my house for the (fireworks) show at 2 in the morning" said Falls Fire Chief Joe Pedulla, when contacted by a reporter.

But for Pedulla and Falls firefighters, the eruption of the use of bottle rockets, Roman candles, M-80 firecrackers and even mortar-style fireworks represents something far more dangerous than just interrupted sleep.

"The added use of fireworks, in comparison to other years, it's increasing the number of structure fires we're getting called to," Pedulla said.

And in some cases, firefighters and police are becoming the targets of groups of juveniles shooting fireworks at them.

On June 19, firefighters responded to a fire at a popular South End convenience store at 19th and Niagara streets. Witnesses told investigators that, just prior to the fire igniting, they had observed "a group of kids were blowing off fireworks in front of the store."

Police said the juveniles lingered and watched firefighters as they battled the blaze, which did most of its damage to the exterior of the store. Witnesses and firefighters told officers that "prior to police arrival, kids were pointing the fireworks towards the (firefighters) while they were attempting to put out the fire and lighting them off towards them."

The juveniles ran from the scene as police went to talk to them.

"We're experiencing fireworks being shot off at firefighters when we're at a scene," Pedulla said. "It's one more thing to deal with on top of a pandemic."

Three days later, firefighters battled a pair of garage fires on the 400 block alley of 26th Street. In both cases, investigators said the cause appears to be fireworks. Neighbors told police that "they have been having a problem with children lighting fireworks off in the alleyway."

"Anytime you send a flying piece of hot material into the air, that can land somewhere flammable, it's a hazard," Pedulla said.

The Falls is not alone in trying to figure out what has triggered this wave of fireworks use. From New York to San Francisco, the skies have been lit up every night, and sometimes early morning, for hours at a time and for no apparent reason.

"Maybe people have too much time on their hands," Falls Police Superintendent Thomas Licata said. "There isn't a lot to do recreationally these days and so maybe this is how people are amusing themselves."

Firework complaints are soaring after months of pandemic-induced isolation, followed by weeks of tense protests against police brutality and racism. For Falls Mayor Robert Restaino that adds up to a desire for people to understand the "need to care for one another" and stop waking up babies, terrifying pets and costing people, especially seniors, much needed sleep.

"I understand it's annoying, I really do. I just wish people would realize the safety issues," the mayor said.

There doesn't seem to be a pattern in where folks are lighting up the skies.

In Boston, Mayor Marty Walsh said calls to police about illegal fireworks jumped 2,300% in May, compared to the same period in 2019.

The City of Pasadena, California, said firework complaints are up 400%.

In New York City, officials are creating a task force to crack down on illegal fireworks sales in the city and surrounding states. In the last two months, NYPD has received at least 4,862 complaints about fireworks.

In Niagara County, fireworks sales are specifically regulated through a county ordinance passed in 2015, with only "sparkling devices" being allowed for sale. Those devices include "ground-based or hand-held devices that produce a shower of white, gold, or colored sparks as their primary pyrotechnic effect," according to the county ordinance.

The ordinance allows for effects that may include a "colored flame, an audible crackling effect, an audible whistle effect, and smoke," provided the devices "do not rise into the air, do not fire inserts or projectiles into the air, and do not explode or produce a report."

In the City of Lockport, members of the Common Council discussed a rising number of complaints related to the use of illegal fireworks in the community. Fifth Ward Alderman Rick Abbott said many people feel as though their concerns are not being addressed.

"Fireworks have been a disturbance everywhere and throughout the county. The people don't think their complaints are being recognized," he said.

Mayor Michelle Roman said the difficulty with fireworks is that police will respond to the complaint and by the time they get there, the person is finished using the fireworks.

"By the time they get there ... they can't pinpoint exactly where it was coming from," she said.

Roman agreed with Abbott's request for a public announcement discouraging fireworks use and issued a note to that effect on social media. Roman said revising the city's noise ordinance may be one way to tackle the problem.

"I think they get a warning and also it's very subjective," Roman said. "It doesn't have any real definition of what noise is ... it's like your neighbor says your music is too loud type thing."

Lockport Police Chief Steven Abbott said his department has fielded a lot of fireworks complaints lately, adding that over the weekend there were about 30 calls. He agreed it can be difficult to find the perpetrators.

"A lot of times you kind of got to catch the person in the act before you can even issue the citation for it," he said.

Acting Niagara County Sheriff Michael Filicetti says his office has not received more than the usual number of fireworks complaints, so far. But in Erie County, District Attorney John Flynn took the unusual step of publicizing the penalties that can be imposed for folks setting off illegal fireworks.

Flynn suggested those using illegal fireworks could be charged with second-degree reckless endangerment, a felony.

"We're all facing the same issues and we're trying to do the best we can," Licata, the Falls police superintendent, said. "I've told my officers to address the issue."

Restaino said he has also discussed the fireworks problem with Licata and asked him to address it.

"Obviously, there are restrictions on the private use of fireworks," Restaino said, "and the city police department, if they can take action against those who (are using illegal fireworks), they will."

Licata said sometimes by the time an officer can reach an area where fireworks are being set off, the people who were setting them off have already fled.

"If they can get there and they can address it, I've told them, 'Do it!'," the superintendent said.