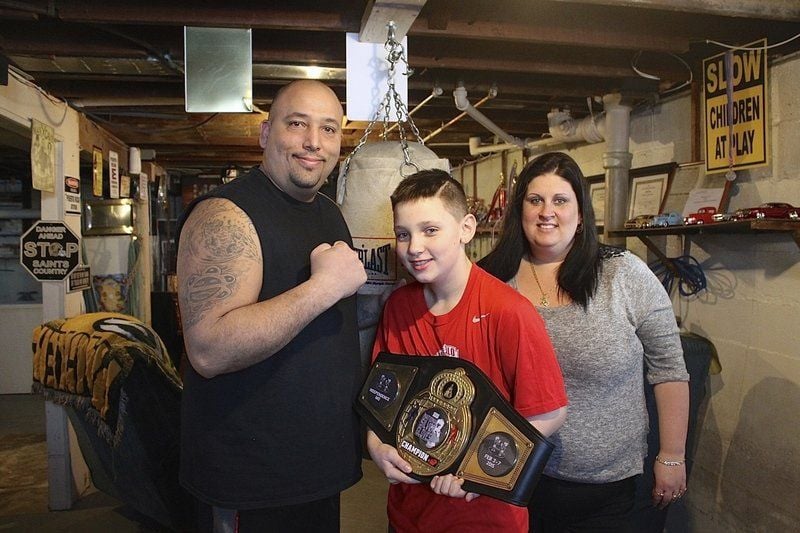 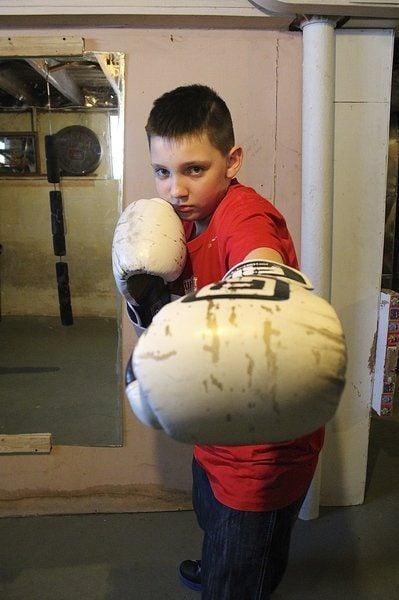 MIA SUMMERSON/CONTRIBUTER National boxing champ Keith Torres started boxing at age 8. He says he eventually wants to reach a level comparable to that of one of his heroes, Muhammed Ali. 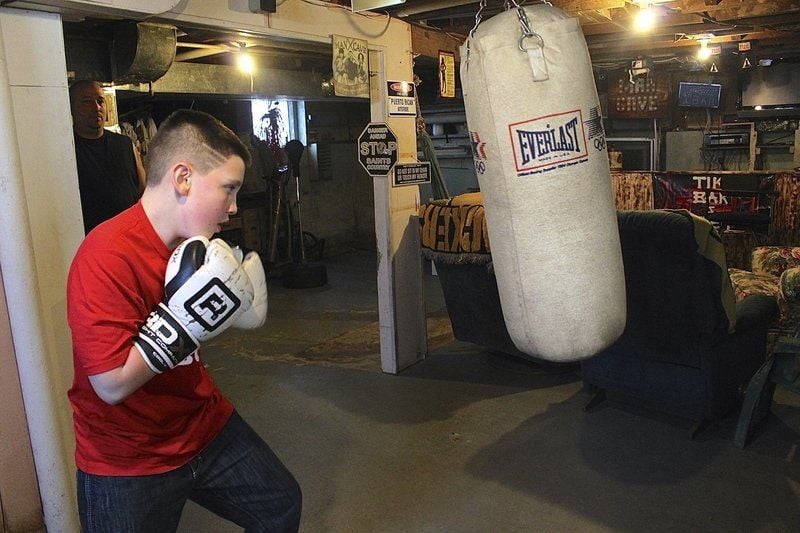 Keith Torres practices boxing in his basement. Torres has been boxing for three years.

MIA SUMMERSON/CONTRIBUTER National boxing champ Keith Torres started boxing at age 8. He says he eventually wants to reach a level comparable to that of one of his heroes, Muhammed Ali.

Keith Torres practices boxing in his basement. Torres has been boxing for three years.

Keith Torres has learned from his father that he has to work hard everyday to reach his goals, and last month that hard work paid off when he took home the Sliver Gloves national boxing title.

Giovanni Torres, a certified boxing coach, said he trains with his son at home about 80 percent of the time, with the other 20 percent of his training taking place with national boxing champion, Ross “The Boss” Thompson, at the Police Athletic League of Buffalo. When he’s not boxing, Keith’s busy performing well academically in the sixth grade at Hyde Park Elementary School, said his mother, Melinda Torres.

“(Boxing) teaches him self-discipline,” Torres said of his son. “So he will really learn how hard it is to accomplish something, that nothing is handed to you, you have to earn it.”

The Silver Gloves boxing championship, which took place Jan. 5 to 7 in Independence, Mo., is for boxers ages 8 to 15. It’s the junior version of the Golden Gloves competition. Keith competed in the 115 pound weight class for 10 and 11-year-olds and went up against young boxers from across the country.

Keith got his start in wrestling at age 7, but it was picking up boxing at age 8 that really began to bring out his natural talents. He started his journey to the Silver Gloves win in Rochester for the area qualifying tournament, then went on to the regionals in Utica. From there, it was on to Missouri.

A victory in boxing doesn’t always come in the form of a knockout. In the event that all three one-minute rounds pass without a knockout, the boxer who landed the most successful punches is declared the winner. That was the case for Keith, who walked away from the finals with a 2-0 victory, two medals and the Silver Gloves national championship belt.

“It feels really good,” he said.

The 11-year-old champ says his signature move is the counter punch, which he describes as dodging a punch and then landing one while his opponent is rebounding from his own miss. He’s learned to perfect his moves with the help of careful instruction from his father, his coach at home, and Tompson, his coach at PAL Buffalo.

PAL is an organization dedicated to providing the children of Western New York with productive ways to spend their free time. They offer athletic opportunities as well as recreational, educational and cultural programs to children in an effort to keep them off the streets, according PAL Buffalo Executive Director Modie Cox.

“I told (Thompson), ‘If this kid is serious, if he makes it to nationals, we’ll take care of him,’” Cox said. “We uniformed him up, got him nice PAL gear and equipment to the point that other kids were asking about him. He looked like he was part of a team, very professional.”

Cox added that Keith’s success has caused him to take a different look at PAL Buffalo’s boxing program and start thinking of ways to invest more into it. In the future he said he’d like to be able to send as many as five boxers to these competitions at a time.

In the meantime, Keith said he plans to continue boxing and hopes one day to fight professionally, and to eventually reach the level of one of his legendary boxing heroes. He and his family have their sights set on a spot on the U.S. Youth Olympic team, once he feels he has demonstrated enough ability to represent his country. This becomes an option once Keith turns 14, his father said.

“I think there’s more I can accomplish,” Keith said. “I want to be like Muhammad Ali. I want to get to that point.”