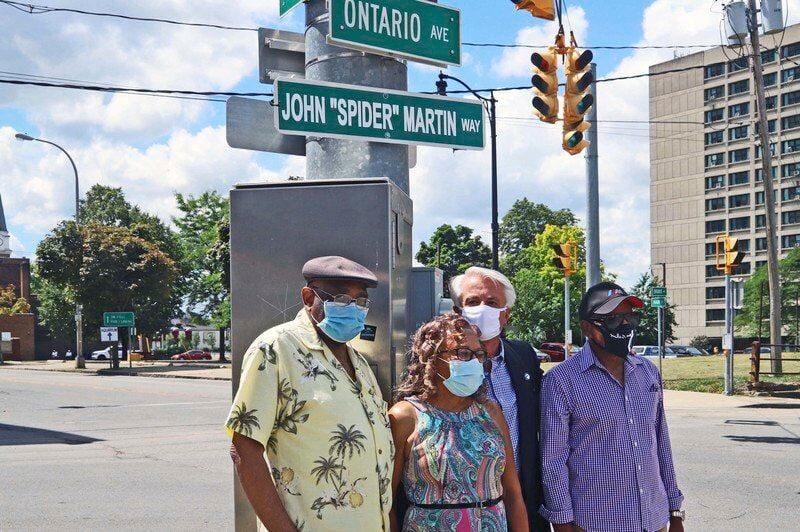 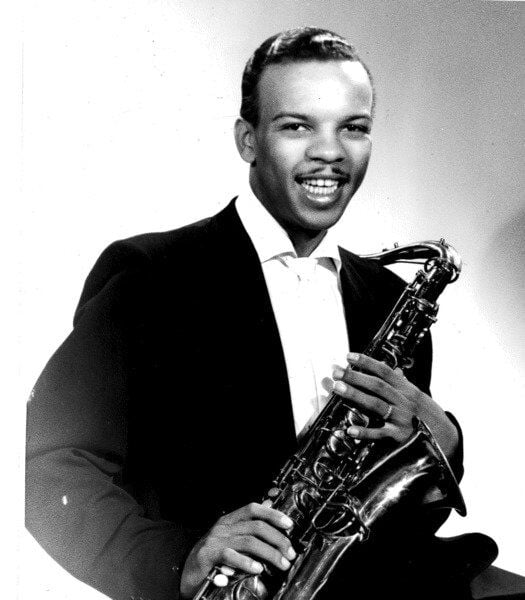 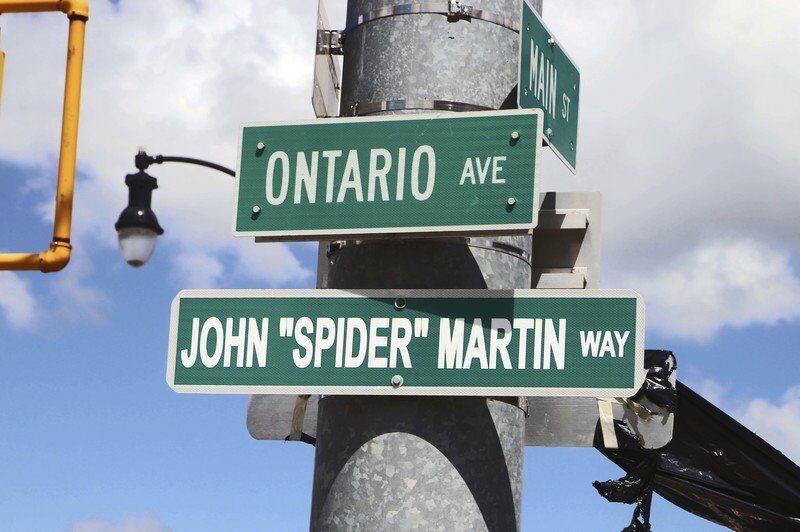 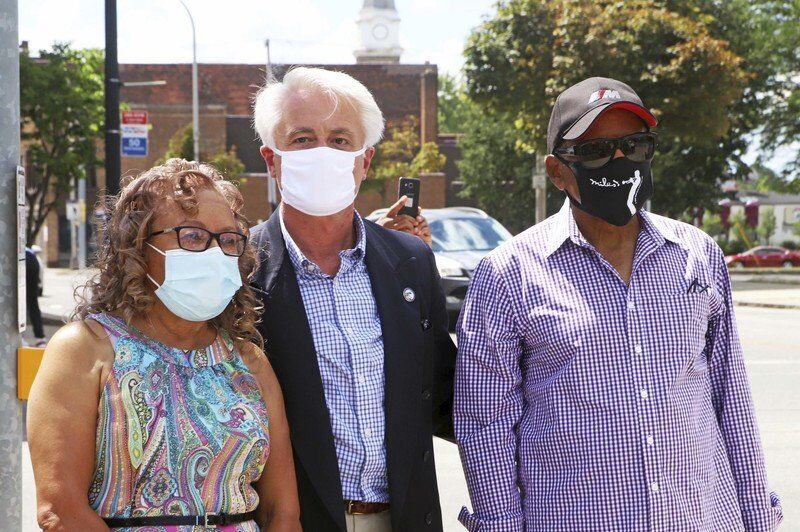 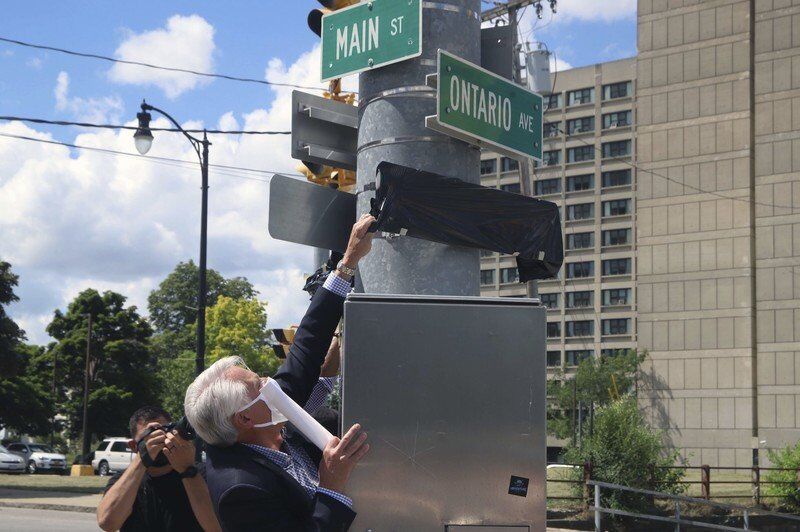 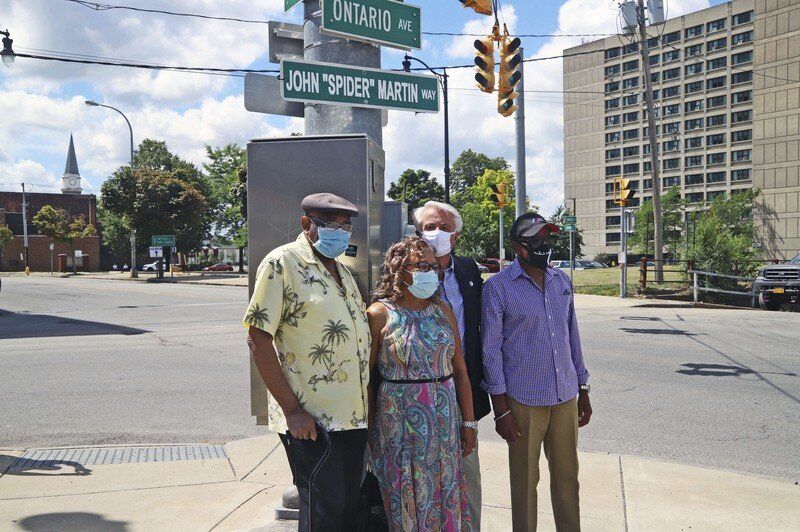 The signs are up at the intersection of Main Street and Ontario Avenue and soon a pedestal and plaque will join them to commemorate the accomplishments of the late Niagara Falls musician John “Spider” Martin.

One of most gifted musicians to ever call the Falls home, and a legend in jazz music circles, city leaders acted in mid-July to approve the honorary designation of the intersection as John “Spider” Martin Way.

“It’s really a tribute to this great man,” said Falls Mayor Robert Restaino. “He had an impact not just locally but nationally.”

The Falls City Council had previously, in a unanimous vote, approved the designation, with the planned 12-foot-by-18-foot aluminum pedestal and graphic panel “giving the history and background” of Martin’s “international travel, his music and his relationship with the Ontario House,” a legendary jazz and blues club in the city.

The intersection where the street signs are posted and the pedestal and plaque will be placed is just down the block from where the Ontario House once stood.

Martin’s surviving siblings, Kenny Martin and Daisy Lewis, watched the sign unveiling and then walked with Restaino to determine which of the four corners of the intersection should hold the plaque and pedestal.

Martin, who would have been 89 in August, died in 2000. Born on Aug. 18, 1931, in Asheville, North Carolina, Spider, the oldest of the Martin children, moved to Center Court in the Falls with his siblings and his parents, John W. Martin, Sr. and Emogene McCorkle.

Kenny said it wasn’t hard to imagine that his brother would one day lead the house band at the posh Breakers Resort in Palm Beach, Florida.

“He had a lot of energy. He was a natural salesman,” Kenny said. “He could get anything done. He could get things done when it seemed impossible.”

Including acting as his own booking agent on the road.

“Once he played some place, they’d always bring him him back,” Kenny said. “He worked a circuit.”

It was a circuit that brought him into the orbit of some of the greatest jazz performers ever. Spider began traveling with Lionel Hampton’s big band, and worked with such top recording artists as Aretha Franklin, Etta James, William Picket, “Philly” Joe Jones, Johnny “Hammond” Smith and Nat Adderly.

When he would come home to the Falls, he would bring along artists like Dizzy Gillespie, Charlie Mariano and Lee Konitzto to play with him at the Ontario House.

Spider recorded on the Improv Records label and he didn’t forget his baby sister, Daisy, when he went into the recording studio.

“We were really close,” Lewis said, while sitting in the backyard of her LaSalle home. “We talked a lot. We hung out. He was a great brother.”

And Spider showcased his relationship with Lewis when he wrote and recorded “Sweet Thang,” the song named after his little sister’s nickname.

Kenny was also close to Spider. He became the band’s chauffeur, driving a Cadillac hearse, big enough to carry the group’s drum set and organ.

“I’d go sleep at the motel while they were playing, so that I could driver them after the shows,” Kenny said. “I got all the hard work, but it was enjoyable.”

How enjoyable? When a reporter asked Kenny for his favorite story about Spider, he let out a loud laugh.

It was all pretty heady stuff for a son of Center Court.

“And it shows people can come up in the housing project and become something,” Kenny said.

It was while he was living in Center Court that “Spider” discovered his interest in music and began studying his art. Lewis said he encouraged his friends to take up music too.

“He had a natural personality,” Lewis said. “He would go around and convince the parents of his friends to buy them musical instruments.”

Soon the Martin’s apartment become a hub of music.

“Oh our house was like the hospitality house because (Spider) had the band practicing there,” Kenny said. “People from Buffalo, Lackawanna, they would all come over to get pointers from Spider. He was gifted, a natural when it came to music.”

Spider went on to co-found the Production Center for the Arts in Florida and was active in charity work.

He performed with the Rochester and Buffalo Philharmonic orchestras and he was inducted into the Niagara Falls Music Hall of Fame in 2018.

“Spider just had a charisma about him,” Lewis said.