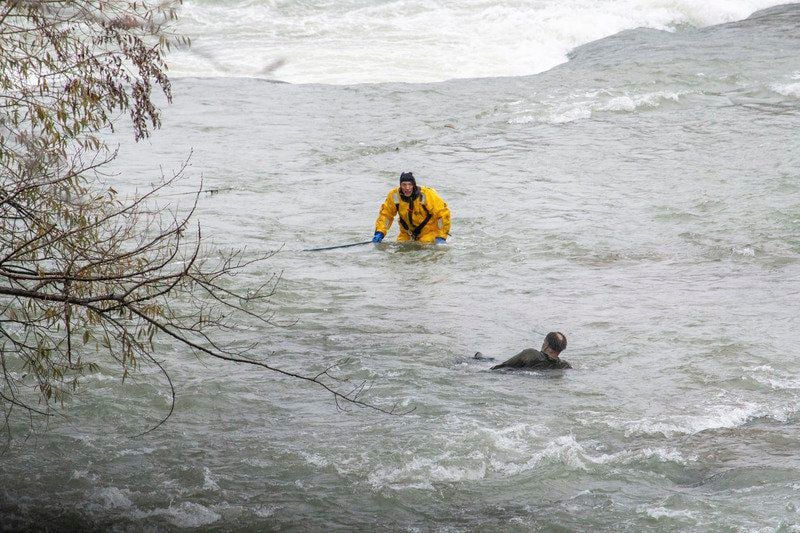 New York State Parks Police Major Clyde Doty braces himself in the Niagara River and readies to grab the man after he slipped from a harness and is carried toward the brink of the falls. 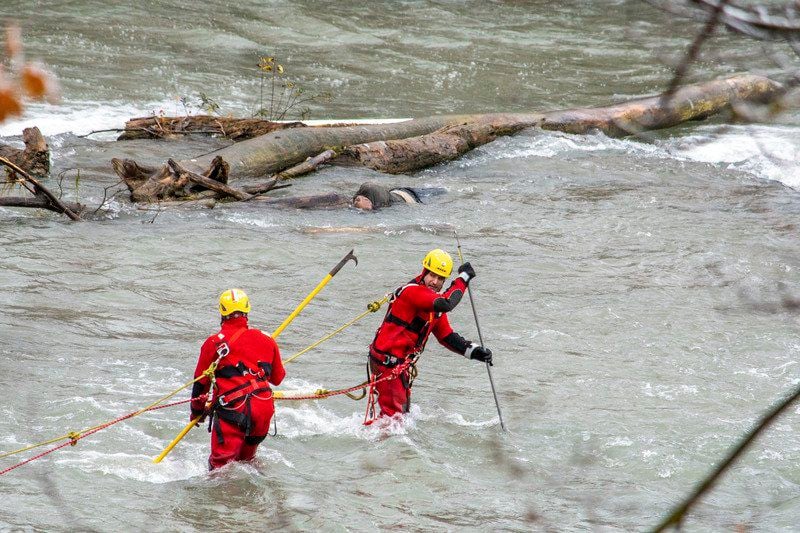 Photos by RobShotsTwo members of the Niagara Falls Fire Department make their way to a man clinging to a log in the swirling waters of the upper rapids near Goat Island on Thursday afternoon. 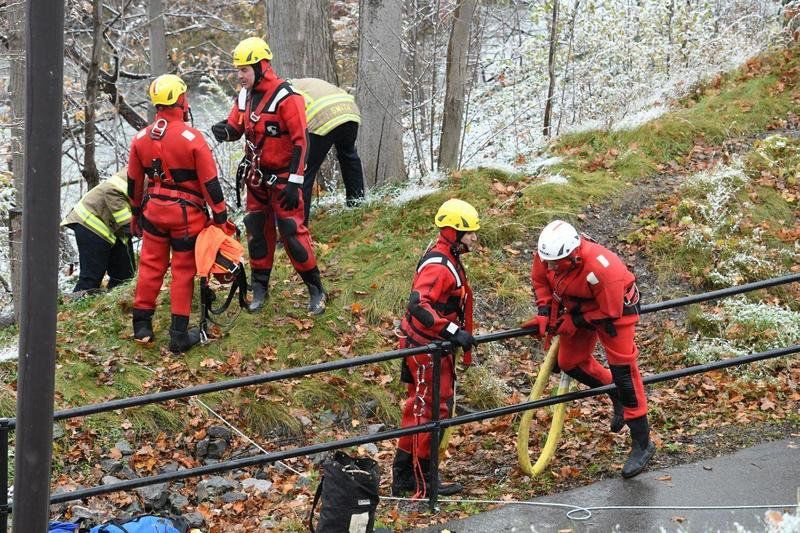 First responders ready their gear as they attempt a rescue in the Niagara River on Thursday afternoon.

New York State Parks Police Major Clyde Doty braces himself in the Niagara River and readies to grab the man after he slipped from a harness and is carried toward the brink of the falls.

Photos by RobShotsTwo members of the Niagara Falls Fire Department make their way to a man clinging to a log in the swirling waters of the upper rapids near Goat Island on Thursday afternoon.

First responders ready their gear as they attempt a rescue in the Niagara River on Thursday afternoon.

Major Clyde Doty kept repeating the same things over and over.

While he held tight to a near-unconscious man in raging rapids in the middle of the upper Niagara River, roughly 100 yards from the brink of the American falls, the New York State Parks Police rescuer said he kept telling the man to keep his head above water while reassuring him help was on the way.

“I just kept telling him, ‘We got you, we got you. You’re not going anywhere because you are a strong man,’” Doty said.

At 1:50 p.m. Thursday, Doty and the unidentified male were helped to safety from the raging and frigid waters between Luna and Bird islands by Niagara Falls firefighters, thus completing a breathtaking rescue effort that started roughly two hours earlier with the first report of a man clinging to a log in the middle of the river.

In an interview on Goat Island following the rescue, Doty was asked how he felt in the moment.

He described it as a “read and react” situation, the kind that required him and his fellow first responders to focus on their training and trust their instincts.

“I’m glad it all worked out,” Doty said.

“Everybody trains and everybody reacts and that’s just what we did,” he added.

The drama began when visitors on Goat Island started noticing what appeared to be a man in the river just before noon. State parks police said the initial report came in at 11:45 a.m.

Frank Tramonte, an Allentown, Pennsylvania resident who was visiting the Falls with his family, said he noticed something that looked odd in the river but at first could not figure out what it was. Once he determined there was a man out there, he said he contacted the authorities.

“I saw something floating in the water and I said ‘is that a log or something?’ “ Tramonte recalled.

Falls resident BillyJo Clause was also among an initial group of state park visitors who spotted the man in the river. Clause joined dozens of other people who gathered along a shoreline trail on Goat Island to watch the drama unfold. At times, onlookers shouted words of encouragement, urging the man to “hold on.”

“I’ve lived here my entire life and I’ve never seen anything like this,” Clause said.

There were several desperate moments when it appeared the rescue would not be successful.

Earlier in the rescue sequence, a pair of Falls firefighters attached to a tether line from shore managed to reach the man as he was holding in place near a pile of logs just above a set of rapids, further up the river.

The firefighters - Capt. Gordy Stewart and Capt. Gerald Frazier - slipped a flotation collar around the man’s torso, but as they started to pull him back to shore, he slipped out of the harness and drifted down river. As the man slid over an elevated section of rocks and white rapids, he initially pulled both rescuers over with him. The two tethered firefighters managed to regain their footing, and slowly worked their way back to shore as the man started to float closer to the falls.

As the man continued to drift, Doty, who was further downstream, was preparing to enter the water from Luna Island.

He said he heard a loud gasp from the dozens of onlookers who watched the man break away from the two firefighters and the sound prompted him to speed up his preparation.

“There was a difference in that noise,” Doty said, describing what he heard in the moments after the first rescue attempt failed. “We looked up and we saw him coming.”

Doty positioned himself at a point in the river where he thought the man might move. During his press conference on shore, Doty said he had a feeling the firefighters might experience “some sort of mishap” and wanted to be prepared. He said he secured his position in the water by holding one foot against a rock and sticking the other foot in a crevice in the riverbed.

Doty made his way out into the swift-moving water just in time to be in the right place at the right time.

As the man floated in his direction, Doty grabbed him. He squatted in the river, using his legs to hold the man in place and one of his arms to hold the man’s head above the water.

Doty said the man was clearly impacted by the length of time he spent in the cold water, suggesting hypothermia had set in and noting that “he couldn’t move.” He added that the strength of the rushing water pulled the man’s jeans halfway off.

When he had the man in his grasp, Doty said he was unable to move the two of them back to shore.

“All I could do is keep his head above water and wait for help,” he said.

Help eventually arrived, thanks to Falls firefighter Aaron Malstrom, who entered the water using a tether from Luna Island.

On his initial attempt to reach Doty and the man being rescued, Malstrom slipped and fell under the water, forcing him to return to shore for another try.

Malstrom went further up the river where he was finally able to secure his footing, navigate his way through the rushing water and reach Doty and the man so they could be pulled to the shore.

Authorities said the man appeared to have struggled with the firefighters during the initial rescue attempt, although they acknowledged that he may have been disorientated from being in the 51-degree water for so long.

In an effort to aid rescuers, authorities asked officials with the New York Power Authority to help lower the river levels by diverting more water to the Niagara Power Project hydropower plant.

Officials are not sure how the man ended up in the river. New York State Parks Police Capt. Christopher Rola said the man was conscious when he was pulled to the shore. He was taken to Niagara Falls Memorial Medical Center for treatment. His condition was not immediately known.

Falls Fire Chief Joe Pedulla commended Doty and all three firefighters for their bravery and credited their training with helping them to pull off what, at times, looked like an improbable rescue.

“You never know when something like this is going to happen and, of course, that’s why you have to be ready when it does,” Pedulla said.

For John and Traci Zarling, who were visiting the Falls from California, watching the rescue unfold made for a truly memorable trip.

“I saw a lot of bravery out there on the water today,” John Zarling said.

I witnessed history on Thursday.

NIAGARA FALLS, N.Y. -- Lt. Clyde Doty kept telling the man clinging for his life in river rapids 100 yards from the brink of the American Falls the same thing over and over:  “We got you, we got you.”

Major Clyde Doty just kept telling the man the same thing over and over.