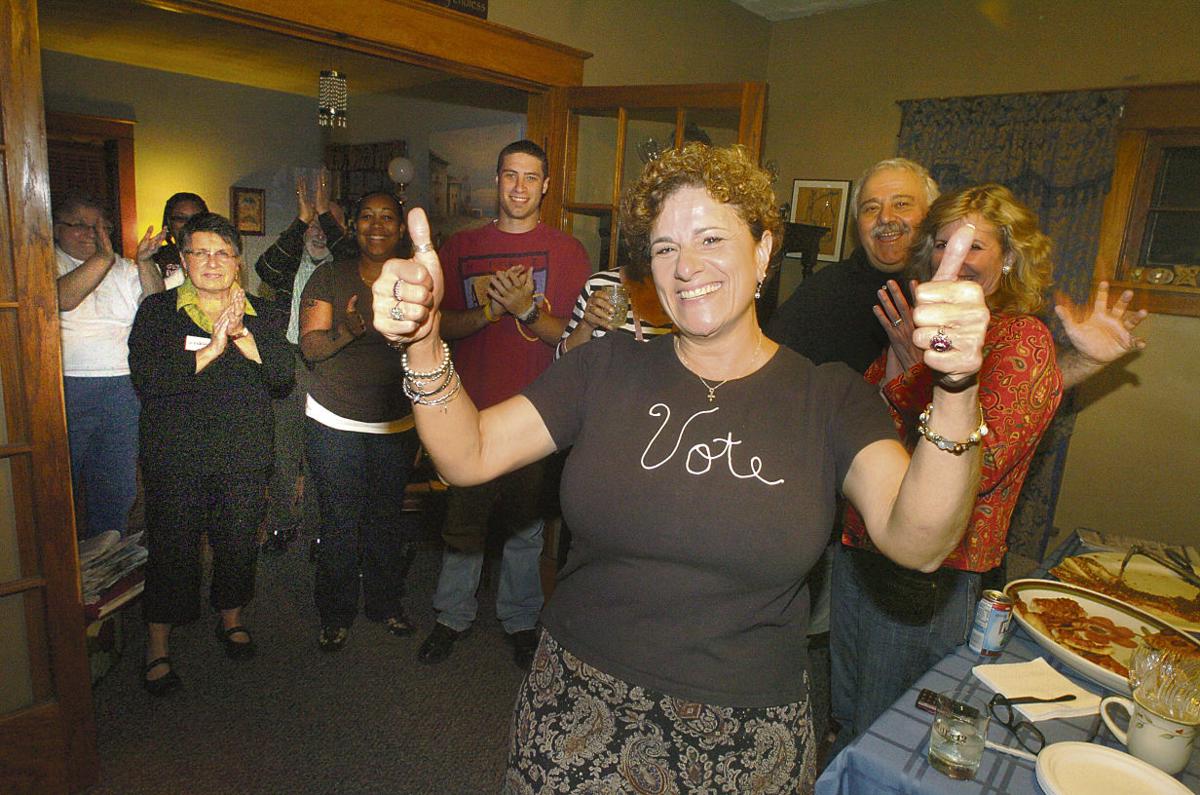 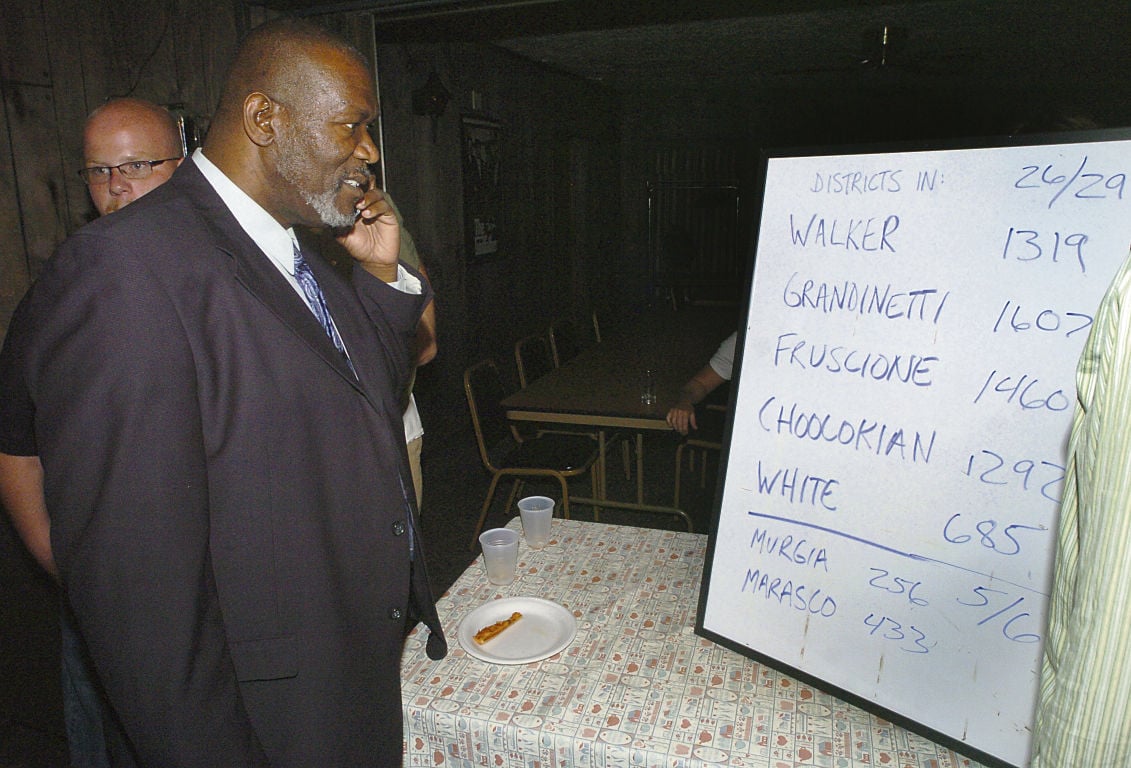 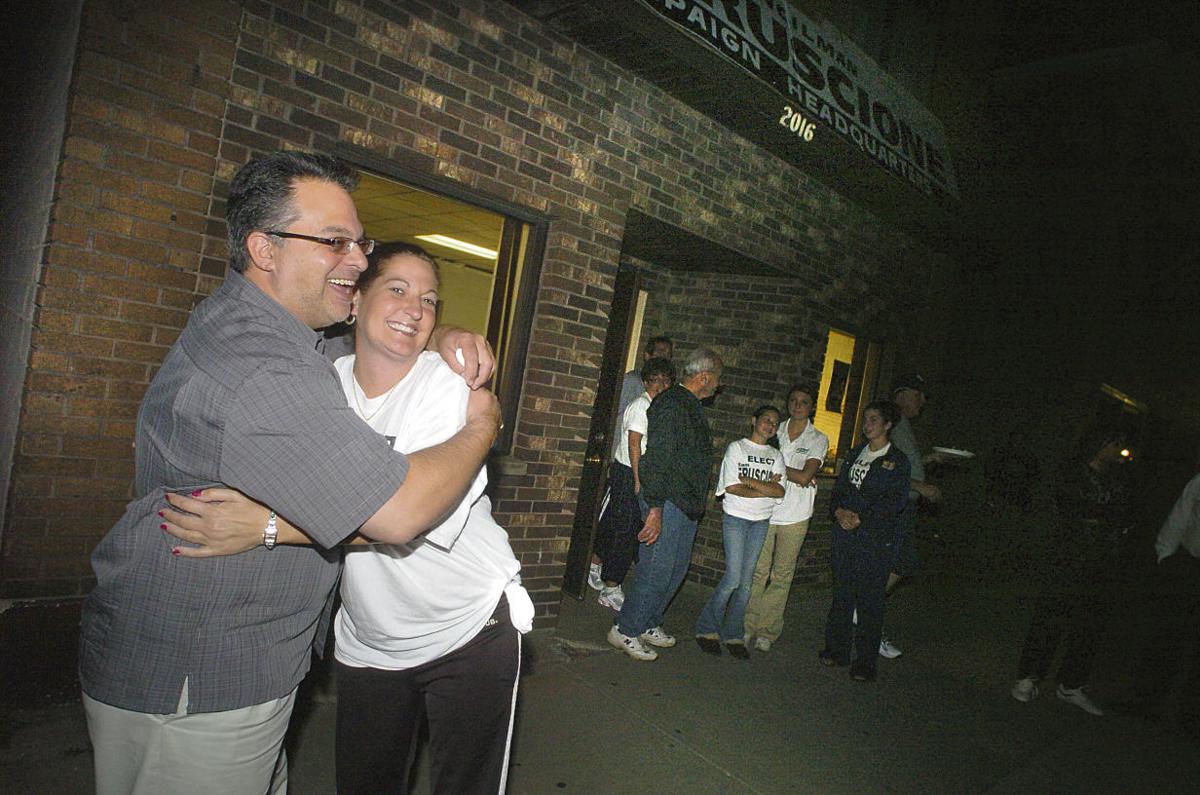 090915 city council/fruscione/nfg DAN CAPPELLAZZO/STAFF PHOTOGRAPHER Niagara Falls - Niagara Falls councilman Sam Fruscione gets a hug from his wife Paula after holding on to his council seat.

090915 city council/fruscione/nfg DAN CAPPELLAZZO/STAFF PHOTOGRAPHER Niagara Falls - Niagara Falls councilman Sam Fruscione gets a hug from his wife Paula after holding on to his council seat.

Niagara Falls City Council candidate Kristen Grandinetti admitted to being very nervous hours before polls closed Tuesday night. She’ll probably feel the same way in November. The political newcomer was the top vote-getter in the Democratic primary, securing one of three slots in the general election. Incumbents Samuel Fruscione and Charles Walker finished second and third respectively to nab the final two spots on the party’s line. “I’m excited about this, I got a lot of support from friends and family,” Grandinetti said. “Nothing is going to change from here. I will work as hard (campaigning) for the general election as I did for the primary. Winning an election is amazing but it’s also a huge responsibility.” Grandinetti, a teacher at Abate Elementary School, finished with 1,832 votes for the top spot, followed closely by Fruscione with 1,721. In a close finish for the third and final Democratic line, Walker (1,614) beat out former councilmember Glenn Choolokian (1,479) by 135 votes. Elliott J. White finished last among the five candidates with 823 votes. All results are unofficial until verified by the Niagara County Board of Elections. The top three Democrats now move on to the November general election with Republicans Candra Thomason and Kenneth Pawlukovich all competing for three, four-year terms on the council. Neither Thomason nor Pawlukovich faced a challenge in Tuesday’s primary. Fruscione, who is seeking his second term on the council, said he was honored by his second-place finish. He believes the support stems from his voting record and actions on the council the past four years. He said he intends to continue running on his record for the general election. “Nothing is guaranteed and I have to work hard to earn this,” Fruscione said. “I’m going to continue to be the workhorse and work for the good of the community.” Walker, an 11-year veteran on the council, also focused his campaign on his voting record and will continue to do so in the upcoming weeks. While he acknowledges the outcry for change among a number of community members, he believes the city is moving in the right direction under current leadership. “I think their vote for change was evident in Kristen Grandinetti’s large win and I also think they wanted some stability and that’s why I finished in the top three,” Walker said. “It feels good moving forward.” As the results of the 39 voting districts poured in, it became apparent Walker and Choolokian were in a tight race for the final Democratic line. Choolokian, who won a one-year council seat back in 2004 but later ran unsuccessfully for a new term, said he ran a good campaign and will not allow himself to be saddened by the outcome. He was, however, disappointed with the low voter turnout. There are nearly 17,000 registered Democrats in Niagara Falls. “People always complain about the leadership of Niagara Falls but they don’t come out to vote,” Choolokian said. “I don’t get it.” White, who attempted to run for council in 2007 but was knocked off the ballot due to invalid petition signatures, agreed with Choolokian and said politics in Niagara Falls are set up to deter change. Grandinetti, Fruscione and Walker were the three candidates endorsed by the city’s Democratic Party. “The (Niagara Falls) Democratic Party is a process that fights to keep the same people in which affects the quality of life for the people in the city,” White said. While the campaigns run by Choolokian and White stressed the need for change, Grandinetti opted to focus on the positives happening in the city and build off of what’s being done right. “I think that really had a good effect on the voting,” Grandinetti said. “When you look at things in a positive light, positive things happen.” Grandinetti said she plans on taking a few days to reflect on her primary victory before preparing for November’s general election. “I will meet with my group and decide how to move forward at convincing the public how I am going to go about bringing positive change to the city,” she said.