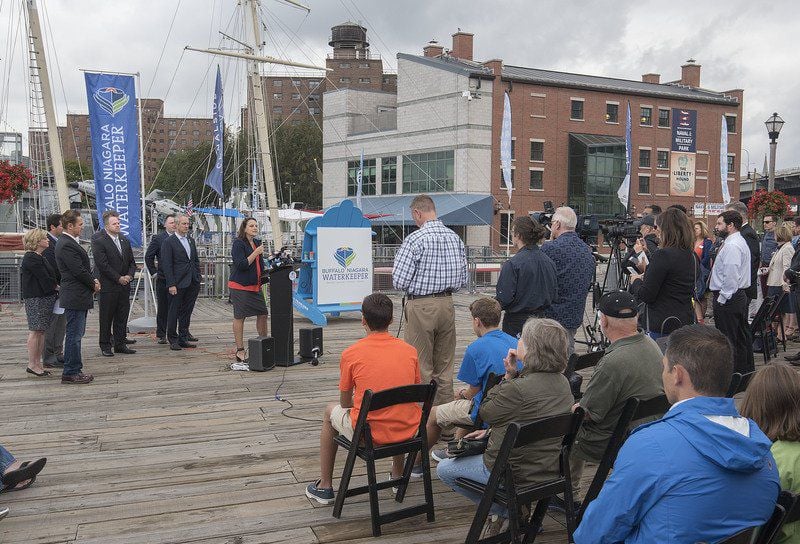 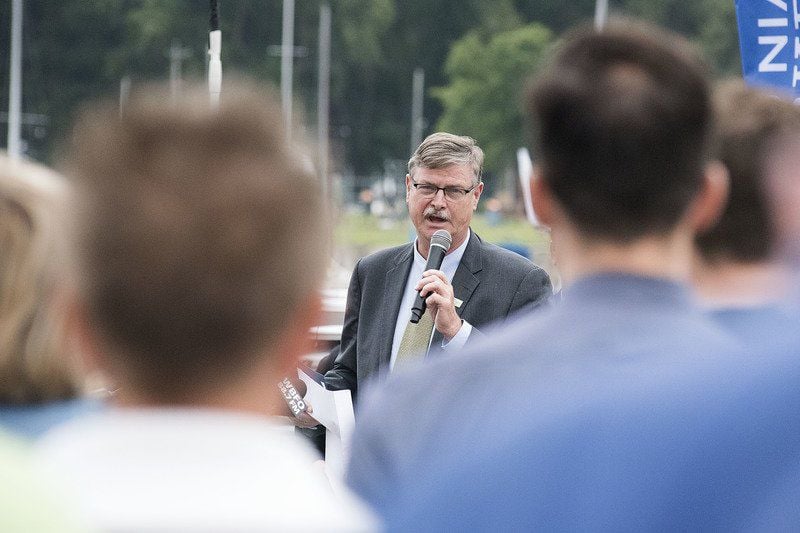 James Neiss/staff photographerMayor Paul Dyster, an early board member of the group, joined other officials at the Buffalo Niagara Waterkeeper announcement. 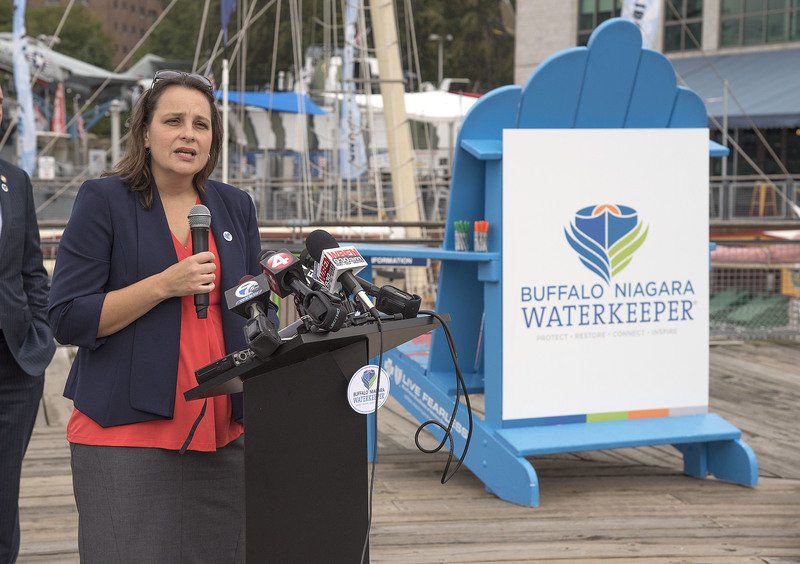 James Neiss/staff photographerMayor Paul Dyster, an early board member of the group, joined other officials at the Buffalo Niagara Waterkeeper announcement.

BUFFALO — Lynda Schneekloth sat at the mouth of the Buffalo River on Thursday, a waterway she helped clean up with a volunteer group she founded nearly three decades ago.

Schneekloth's organization and the work it did still resounds. The riverfront is now home to Canalside, a cornerstone project in the city of Buffalo's revival, and the site her group, now Buffalo Niagara Riverkeeper, chose to announce its rebirth as Buffalo Niagara Waterkeeper.

Erie County Executive Mark Poloncarz recounted the severely contaminated past of the river at the ceremony.

"You didn't want to come down to the water," he said. "It was heavily polluted. It was ugly. It was not something people in this region took pride in."

Buffalo's "renaissance" is now "based off its water," Poloncarz added. Schneekloth said such thinking used to be in short supply but through the work of Waterkeeper and others, is rooting itself in common discourse.

In years past, she said the dynamic was consistently framed as "environment versus economy."

"Instead of understanding the economy is actually built on the environment," she said. "You still hear that argument, which is unfortunate."

Schneekloth now serves as an emeritus board member for Waterkeeper, but a pair of its early members were also on hand at Canalside, where Waterkeeper also released findings from its first annual State of Our Waters report, which identifies areas of regional concern and plans for remediation.

City of Niagara Falls Mayor Paul Dyster and U.S. Representative Brian Higgins, D-Buffalo, were both board members in the group's earlier stages. It's gone through four names since that time, Dyster said, but not unnecessarily. The moniker changes have mirrored the group's growing mission, he said.

"I'm very grateful to see that the Buffalo Niagara Riverkeeper has now decided to admit ... in name what had happened in fact already," he said. "It had become a steward of the waters of the Great Lakes, all the way from Lake Erie through the Niagara River and its tributaries ... to Lake Ontario"

Dyster said among the recommendations in Waterkeeper's report are initiatives that come "straight from the headlines" of the July 29 Niagara Falls Water Authority sewage discharge which turned the lower Niagara River black around the Maid of the Mist docks and gained national attention.

In its preliminary findings, the DEC's Commissioner, Basil Seggos, said the plant was "extraordinarily outdated." The water board agreed, saying the "root cause" of the sewage overflows are a "direct result of outdated infrastructure and system design limitations" at the treatment plant.

Jill Jedlicka, Waterkeeper's executive director, said the decision of how and where the updates should be applied "will make or break this region's recovery."

Jedlicka said the report broke its findings down to specific aspects of water systems, both natural and manmade, and graded them as "excellent," "good," "fair," and "poor." A pair of indicators registered in the range of "poor," she said, "toxic contamination legacy and water infrastructure."

"There's no single entity ... that will solve all the region's water challenges," she said. "We know what the problems are. We know what many of the solutions are. We just need to coordinate – not compete – for the resources that allow solutions to be implemented."

Jedlicka said Waterkeeper is also planning an annual celebration, starting in May of next year, to propel community engagement.

The organization has partnered with D'Youville College on Buffalo's West Side to put on the event and, in addition, will collaborate with the school in its health, science and pharmacy programs.

"Recent tests of lake, fish and ground water show an alarming rate of anti-depressants and narcotic drug levels caused by improper disposal," she said, adding that 49 tons of unwanted drugs had been collected by Erie County in 12 events since 2011.

Schneekloth, also a landscape architect and a retired educator from the University of Buffalo's School of Architecture, said the health of the watershed is intimately connected not only to economic development, but the physical health of individuals who live there.

"Your body is 70-percent water," she said. "If you're drinking from Lake Erie, you're a walking drop of Lake Erie. So whatever you put in that water out there, you put in yourself. We are not separate from the world."