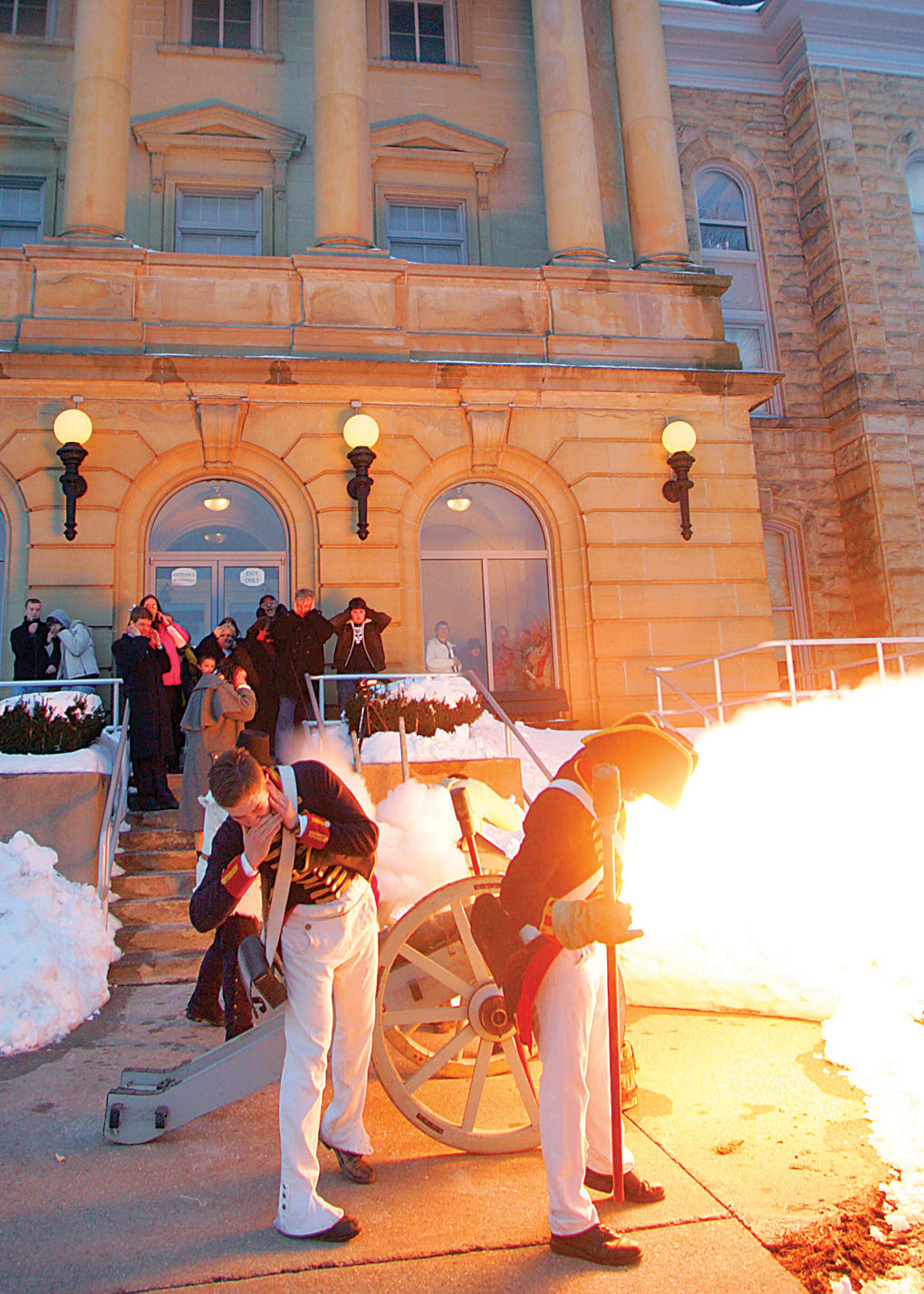 JOE EBERLE/CONTRIBUTOR Lockport, NY - Fire in the hole. An authentic canon from Old Fort Niagara blasted at 7pm Tuesday ringing in Niagara County’s Bicentennial celebration at the Courthouse in Lockport. 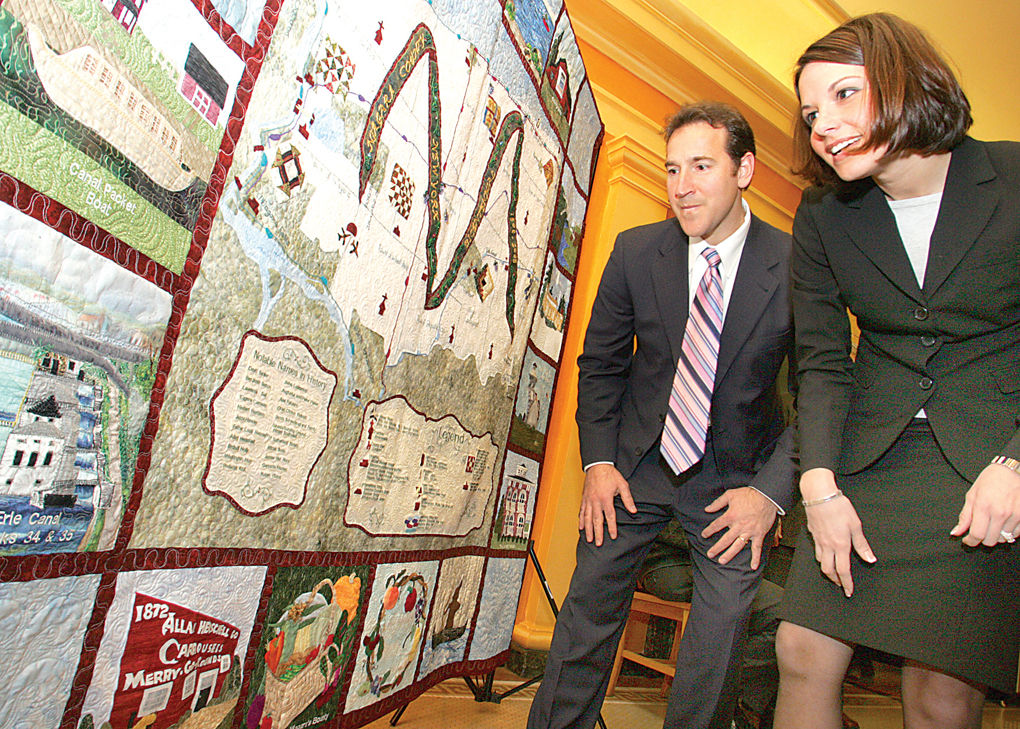 JOE EBERLE/CONTRIBUTOR Lockport, NY - Fire in the hole. An authentic canon from Old Fort Niagara blasted at 7pm Tuesday ringing in Niagara County’s Bicentennial celebration at the Courthouse in Lockport.

Calls of ‘hear ye, hear ye,’ ringing bells, patriotic songs and cannon fire helped mark the passing of Niagara County’s 200th birthday Tuesday. More than 200 people filled the large courtroom on the second floor of the Niagara County Courthouse Building to watch as members of the Niagara County Legislature formally kick off the county’s year-long bicentennial celebration. “I wanted to be a part of history,” said Taren LaGamba, a Lockport resident who attended Tuesday’s festivities. “I wanted to experience history. I liked what I saw. I was inspired.” In officially recognizing the birth of Niagara as a county on March 11, 1808, county leaders — several of whom dressed in 1800s-period garb for the occasion — reflected on the glories of days gone by and the promises of days yet to come. “Ladies and gentleman, please keep in mind we are not just celebrating 200 years of history, we are making history and we are celebrating the bold future of Niagara County and it deserves a round of applause,” said Legislature Chairman Bill Ross, C-Wheatfield, who served as master of ceremonies wearing an 1830s-style suit, complete with top hat and overcoat. Those in attendance reserved much applause for one of their own, Niagara County corrections officer Peter Robinson, who provided the musical entertainment for the evening. Robinson, originally scheduled to sing only a song he wrote titled “Oh, Niagara,” added the National Anthem, America the Beautiful and God Bless America to his performance at Ross’ urging. Robinson, who sang in a group during his college days at Niagara County Community College and is a singer at the Ridgewood Bible Church, admitted Tuesday to having never sang professionally and only sings publicly on occasion. He also admitted to practicing church songs in the rotunda at the courthouse during off hours when only county clean-up crews are able to hear. “This is a great echo chamber,” he said. Robinson said he got his opportunity to participate in the bicentennial event after County Clerk Wayne Jagow heard he had written “Oh Niagara” and suggested he sing it for him. Robinson said the one and only tune he has ever penned was inspired by his love of the community and his faith. He said he wrote it in September without ever intending it for the bicentennial. “If you would have asked me a year ago, if I thought this was going to happen, I’d say no,” he said. “Everybody played a part,” he added. “It’s not just me. I’m just a small part of something big, something exciting.” Jagow, who played up his role as old-time county clerk by ringing a bell and calling out ‘hear ye, hear ye” while wearing his own 1800s period suit and top hat, credited his staff and county workers in other departments for doing a great job in putting the event together. He suggested that everyone in the audience view the bicentennial as a chance to “re-discover Niagara” and all it has to offer. “I’m getting into this,” said Jagow, who likened his outfit to a cross between an old German brewer who bears his family name, Baron Von Jagow, and the infamous William Magear Tweed, better known as “Boss” Tweed of Tammany Hall fame. “My staff made be do this and I’m very glad they did.” Members of the Legislature signed an anniversary proclamation, recognizing the historic significance of the county and its people and the day of “rememberence and reflection” of the “joy, work and sacrifice of those citizens” who “left their mark upon the landscape of Niagara County history ennobling the present.” One-by-one, district-by-district, lawmakers were called up to sign the document which also acknowledged all of the county’s villages, towns and cities, as well as the county’s “neighbors and good friends,” the members of the Tuscarora Nation. “They were here 100 years before the county became Niagara,” Ross said of the Tuscarora. Ross read off the names and incorporation dates of each of the county’s municipalities and closed with a toast, harkening back to the early days of the county when Gen. Marquis de Lafayette, the French general who assisted George Washington during the American Revolution, visited Lockport and spoke of its virtues. “It contains the greatest wonders of art and nature,” Ross said. Tuesday’s bicentennial celebration was just the start of more special anniversary events to come, according to Craig Bacon, deputy county historian and events chairman who said next up on April 19 is a special 5k run in Pendleton. This summer, Bacon said, the county has several more bicentennial festivities planned, including an Erie Canal flotilla that will involve communities along the canal from Middleport to North Tonawanda and will coincide with the city’s annual Canal Fest.