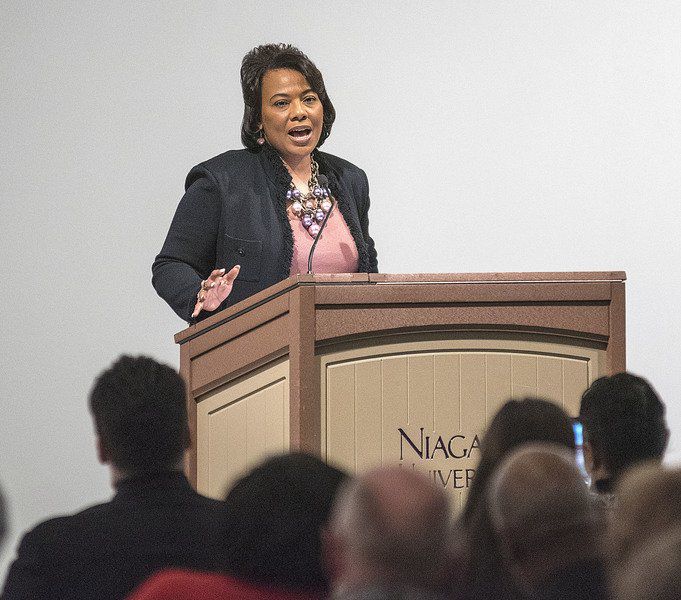 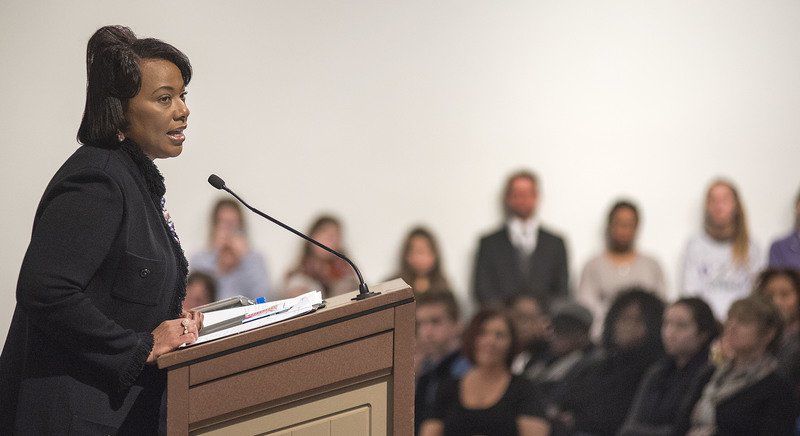 These are revolutionary times, so sharpen the appropriate tools: your eyes, your ears and your mind.

That was part of Dr. Bernice King's message during a Tuesday address at Niagara University's Castellani Art Museum on the eve of Black History Month. Her appearance wrapped up the college's Martin Luther King Jr. observance.

"This is an hour and a time that none of us can afford to disengage," she said. "This is a very troubling, unsettling, uncertain time in America."

The issues are numerous and wide-ranging, according to King, but now hovering over those issues is an atmosphere of division that has gained momentum since the presidential primaries last year.

King, whose work with the non-profit King Center has helped to continue her parent's models of peaceful social change, turned to her father's words for advice on what communities can do to confront growing separations.

"Rarely do we find men who willingly engage in hard, solid thinking," she said. "There is an almost universal quest for easy answers and half-baked solutions. Nothing pains some people more than having to think."

King went on say that change occurs when communities ask difficult questions of themselves, and of their neighbors, but with the goal of understanding first, before being understood.

"We cannot afford to build walls, we have to be in the business of building bridges," she said. "This is a time for each one of us to see the value in building real, and genuine, and depthful relationships. We can ill-afford to allow the polarizing climate to take advantage of us, because it will."

"As my father said, 'We must learn to live together as brothers and sisters, or together we will perish as fools,' " she continued.

King told the crowd, about 200 people packed into the museum's main exhibition space, that her father's message, along with her own, calls for people to "cut through the noise" of politics and mass media to develop research and independent opinions about a situation or a set a people.

King described the present as a season "to cross lines to connect with people" of different races, creeds, colors and upbringings. She recalled her own efforts in fulfilling that call, going as far to sit beside and give her ear to a former leader of the Ku Klux Klan as part of past advocacy event.

"We revere Dr. King, but we only revere him and honor him when its those words we can readily embrace," she said. "But Dr. King's effectiveness was his ability to deal with all kinds of people – even those who opposed and oppressed him and hated him. He was the master of that."

Tara Lyons, the museum's curator of education and collections, spoke to the room in a question and answer period after the address. Lyons said she and fellow staff want the Castellani to function as King described, a "sanctuary" for open conversation and dialogue.

"We want to work with the (Niagara University) student organizations, with our staff, with our faculty and with our community members, to be a space where we can come together to talk about what's happening locally and globally," she said, adding that anyone interested in engaging at the museum should reach out to its staff.

John Richard "Dick" Chamberlain, age 87, of Niagara Falls, formerly of Ransomville, died Wednesday, September 16, 2020 at Schoellkopf Health Center in Niagara Falls, NY. Dick was born on January 3, 1933 in Syracuse, NY. He is the son of the late Edward and the late LaAnna (MacDonald) Chamber…

Rose had a humor like no other! She will be greatly missed! She generously donated her body to UB.