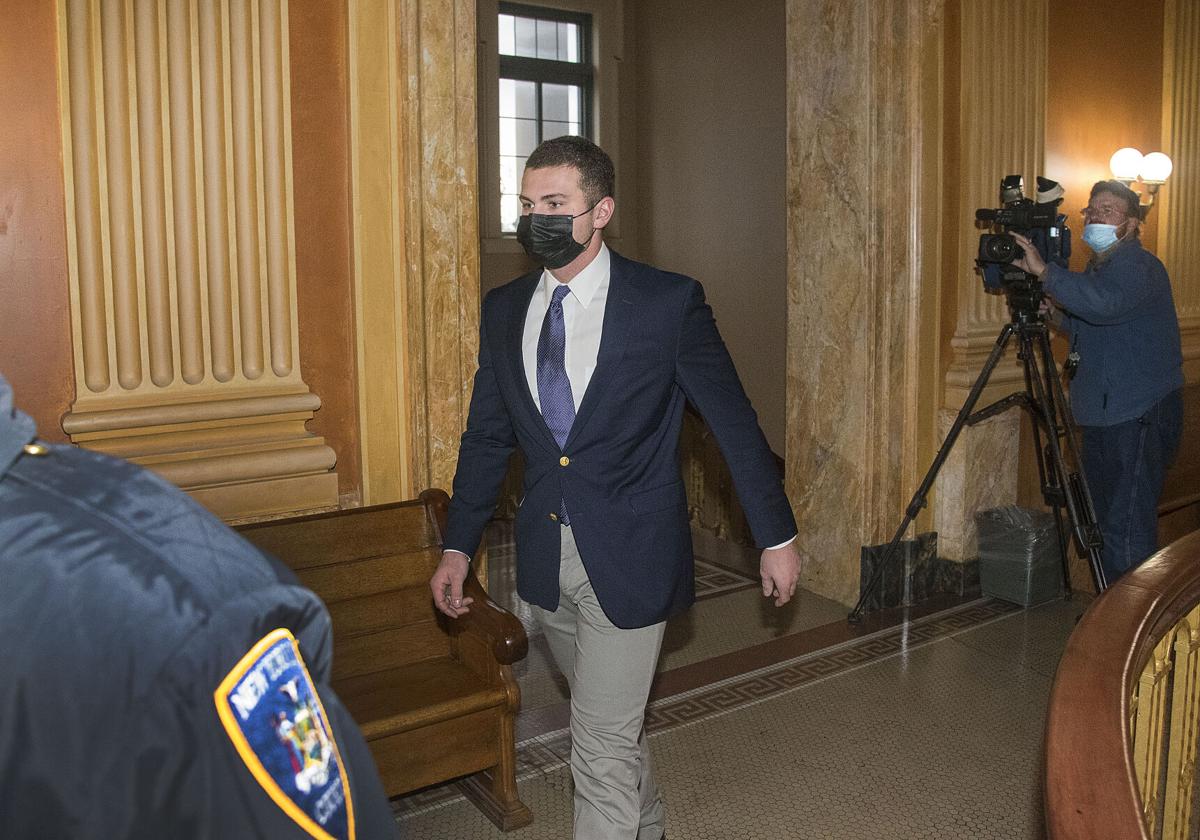 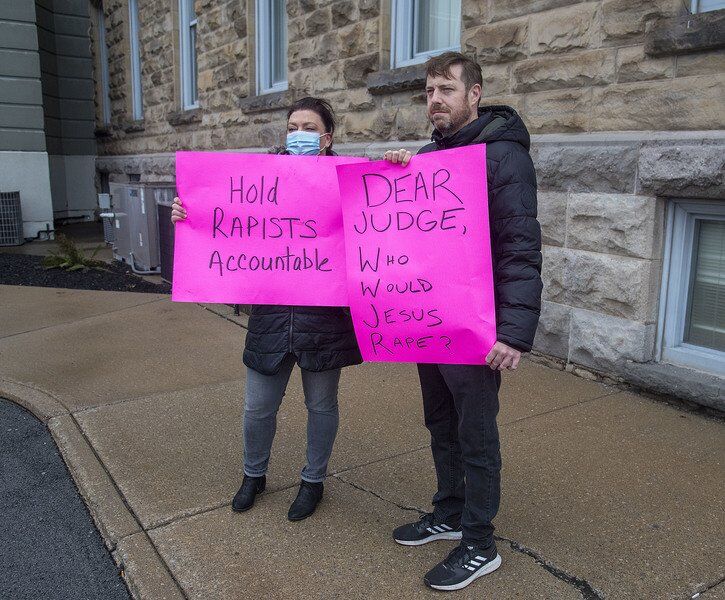 211202 Christopher Belter 3James Neiss/staff photographerLockport, NY - Protesters Jennifer Murphy and Cliff Parks, both of Kenmore, said they heard that one of Christopher Belter' victims asked for support so they came to the Niagara County Courthouse to protest Belters lack of jail time. Murphy said, "I'm a survivor of a sexual assult and my heart goes out to his victims." 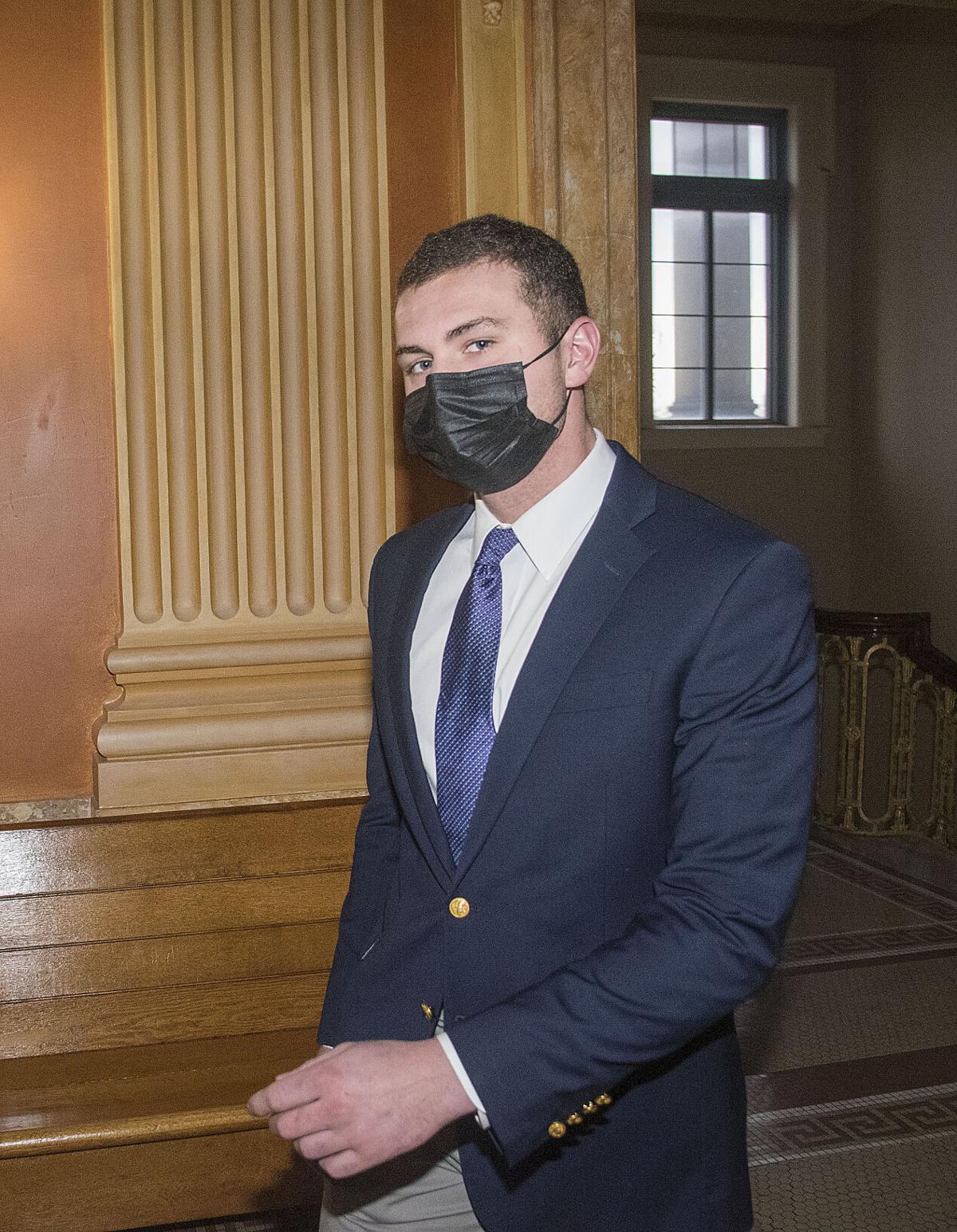 211202 Christopher Belter 3James Neiss/staff photographerLockport, NY - Protesters Jennifer Murphy and Cliff Parks, both of Kenmore, said they heard that one of Christopher Belter' victims asked for support so they came to the Niagara County Courthouse to protest Belters lack of jail time. Murphy said, "I'm a survivor of a sexual assult and my heart goes out to his victims."

LOCKPORT — A Lockport man, whose probation sentence in a series of sexual assault cases led to widespread criticism, was given the highest possible sex offender registry rating on Thursday.

"There's no quarrel over the risk factors," Murphy said. "A (score of) 150 is well within Level 3. It seems to me to be appropriate. That is the court's finding."

"This is a very black-and-white matter," Wydysh told the judge. "We ask you to let the risk assessment be the determining factor."

Belter's defense attorneys had asked Murphy to assign him a lower level offender status, despite agreeing that the calculations in the risk assessment were correct.

"We ask the court to exercise the discretion to a lower than Level 3 (designation)," defense attorney Barry Covert said. "He has come along way in his treatment and his risk of recidivism."

Covert pointed out that Belter has been engaged in intensive therapy with prominent sex offender counselor Dr. David Heffler and that both Heffler and Belter's probation officer believe his risk of re-offending is dropping.

"Dr. Heffler found him at a medium level (of re-offending) and over the last two years he has gone from a high-medium to a low-medium," Covert said.

The defense attorney said Belter's probation officer has previously indicated that they felt "over time he'll continue to improve."

Murphy agreed with the prosecutor.

"To allow the probation officer or Dr. Heffler's opinions to control is not the law of New York state," Murphy said. We're not going to let the risk assessment become the Heffler assessment."

Belter sat impassively at the defense table during the hearing. He showed no emotion, staring straight ahead with his hands folded in his lap.

One of his victims was in the courtroom to observe the hearing. Afterward, she expressed both satisfaction and frustration.

"Today I think that the judge made the correct decision," she said. "But that doesn't justify not giving him jail time. This in no way rights that wrong."

Facing the potential for 8 years in prison for his guilty plea in June 2019 to felony charges of third-degree rape, attempted first-degree sexual abuse and two misdemeanor charges of second-degree sexual abuse for encounters with four teenaged girls that occurred during parties at his then Lewiston home, Murphy sentenced Belter to 8 years of probation.

The judge said that he had "agonized" over his decision, but had concluded that a prison sentence for Belter "would be inappropriate."

Belter had originally been placed on two years of interim probation during a sentencing hearing in August 2019. He was accused of committing the crimes when he was 16 and was first charged in the case when he was 17, and had been eligible to be sentenced as a youthful offender.

But Murphy decided not to grant him so-called "YO status" because Belter admitted that, while he was on interim probation, he had installed software on his computer to bypass a content blocker that kept him from viewing pornography. His attorney said Belter has since been placed on medication to better control his behaviors.

Murphy warned Belter that his 8 years of probation will be like "a sword dangling over your head."

It was revealed during the Thursday hearing that a pre-sentence report, prepared by probation officers, had recommended that Belter "be returned to probation."

His designation as a Level 3 sex offender means that Belter must register his home address with state and local law enforcement officials for the rest of his life. His address and picture will be published on a state-operated web site.

Belter, who is currently attending an undisclosed college or university must also register with that institution and should he move out of New York, he will be required to notify authorities in the state where he relocates.

Covert had no comment on Murphy's designation as he left the courtroom with his client.

Belter's case is also tied to the delayed trial of his mother, step-father and an adult neighbor charged with providing booze and pot to at least three teenage girls, who then claimed they were sexually assaulted in the family's Mountainview Drive home in Lewiston.

His mother, Tricia Vacanti, 50, and step-father, Gary Sullo, 56, were charged in January 2020 with a combined 30 criminal counts in connection with what prosecutors and State Police investigators have described as alcohol and drug-fueled teen parties alleged to have taken place at their home in 2017 and 2018.

Vacanti and Sullo had already been facing 19 combined counts of unlawfully dealing with a minor and endangering the welfare of a child in the case. The January 2020 charges included 22 counts of endangering and unlawful dealing against Vacanti and another eight counts of the same allegations against Sullo.

A neighbor, Jessica Long, 42, also faces single counts of unlawfully dealing with a minor and endangering the welfare of a child.

The trial of the three adults has been indefinitely postponed in Lewiston Town Court as a result of pandemic related protocols.

LOCKPORT — Christopher J. Belter Jr. was categorized as a Level 3 sex offender during a hear…