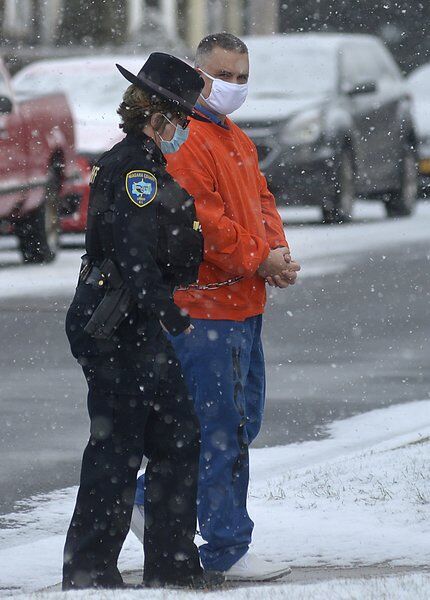 Joseph H. Belstadt, is led into State Supreme Court in Niagara Falls on Friday where he was sentenced to 25 years to life for the 1993 death of Mandy Steingasser. (Photo by Dan Cappellazzo) 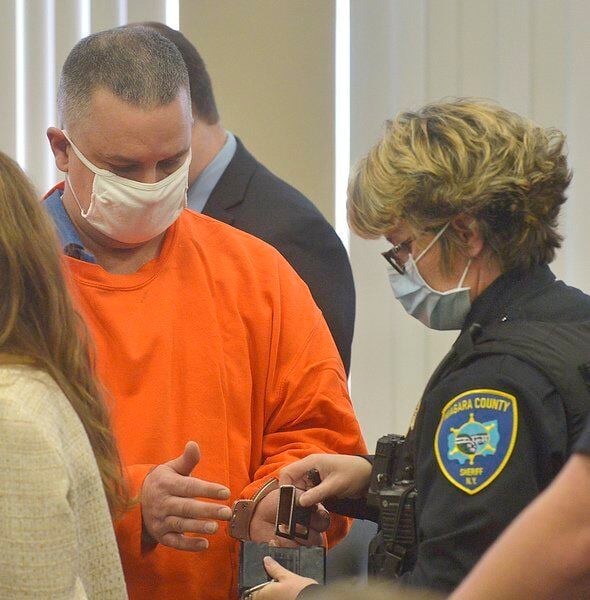 Joseph H. Belstadt in uncuffed before addressing the court during his sentencing on Friday. (Photo by Dan Cappellazzo)

Joseph H. Belstadt, is led into State Supreme Court in Niagara Falls on Friday where he was sentenced to 25 years to life for the 1993 death of Mandy Steingasser. (Photo by Dan Cappellazzo)

Joseph H. Belstadt in uncuffed before addressing the court during his sentencing on Friday. (Photo by Dan Cappellazzo)

An Acting Niagara County Court Judge has sentenced Joseph Belstadt to the maximum possible prison term for his conviction of second-degree murder in the 28-year-old slaying of Mandy Steingasser.

Judge Michael Mohun told Belstadt that a jury "reviewed 150 exhibits and heard dozens of witnesses" before finding him guilty on the only criminal count he faced.

"Joseph Belstadt has walked free for longer that Mandy was alive," Mohun said. "He will walk free no longer."

The judge sentenced Belstadt, 46, to 25 years to life behind bars. The convicted killer looked down and shook his head as the sentence was pronounced.

Moments before, Belstadt had told the judge that the jury in his case came to the wrong conclusion.

"I am innocent. I've said that from day one. I did not kill Mandy Steingasser," Belstadt said.

Glancing toward Mandy's mother, Lorraine Steingasser, who was seated in the courtroom for the sentencing, Belstadt said, "I would like to say to Mandy's family and friends how sorry I am for the pain you've gone through, but I am not the person who killed Mandy."

Belstadt's lead defense attorney, Michelle Bergevin, also criticized the verdict of the jury of six men and six woman who heard the case.

"The jury got it wrong. Joe Belstadt did not murder Mandy Steingasser," Bergevin said. "This case is not over. This is not justice. Justice is not locking up an innocent man for the rest of his life."

And Bergevin suggested an appeal of the case is all but certain.

"It's a wrongful conviction and it's not going to end here," the defense attorney said. "I'll fight to make this wrong right in the future. He does not have the black soul it takes to be a murderer. The jury got it wrong."

But for North Tonawanda Police investigators and Niagara County prosecutors, who doggedly kept the cold case murder from being forgotten, there was no doubt about the justice of the jury verdict.

"For 28 years, (Belstadt) evaded justice," Niagara County District Attorney Brian Seaman said. "It was a horrendous and violent crime. (Belstadt) fractured this girl's skull and strangled her with her own bra. That calls out for justice for Mandy."

In tearful remarks to the judge, Lorraine Steingasser spoke of how Belstadt, for the last 28 years, "has been living his life" while her daughter experienced none of those joys.

"He shows no remorse," Steingasser said

Then turning toward Belstadt, standing no more than 10 feet away, Steingasser shook her finger at him and said, "I want you to look at me. I want you to think of me until you find remorse and ask for forgiveness."

She asked Mohun to sentence Belstadt to "28 years."

"He has been free for 28 years and he should get no less (of a sentence)," Steingasser said.

Mohun told Steingasser that her tears were not a sign of weakness, but rather an expression of her love for her daughter.

"Children should outlive their parents. Children should not be murdered," Mohun said. "You never got a chance to say good-bye because of her senseless murder by Joseph Bestadt."

Mohun mused that Mandy was "an enchanting, free-spirited" teenager, who "played the clarinet, listened to Led Zeppelin and danced to Jim Croce."

"One can only imagine what she would have accomplished," the judge said.

Belstadt's trial began on the 28-year anniversary of the discovery of Steingasser’s remains in an overgrown and debris-strewn ravine just off of a parking area next to Myers Lake in Bond Lake Park.

Steingasser, 17, was last seen alive getting into Belstadt’s car in the early morning hours of Sept. 19, 1993. Investigators long believed that Belstadt drove Steingasser to the park, a location they said he used as a lover’s lane.

Once there, prosecutors contended that Belstadt attempted to have sex with Steingasser and when she resisted, he killed her.

Cynthia Renee (Dashineau) Schottke passed away January 11, 2022 following a struggle with cancer, under the care of Niagara Hospice. Cynthia was born on July 27, 1965, the daughter of Melvin (late) and Carol Dashineau. She graduated from Niagara Falls High School and Niagara County Community…