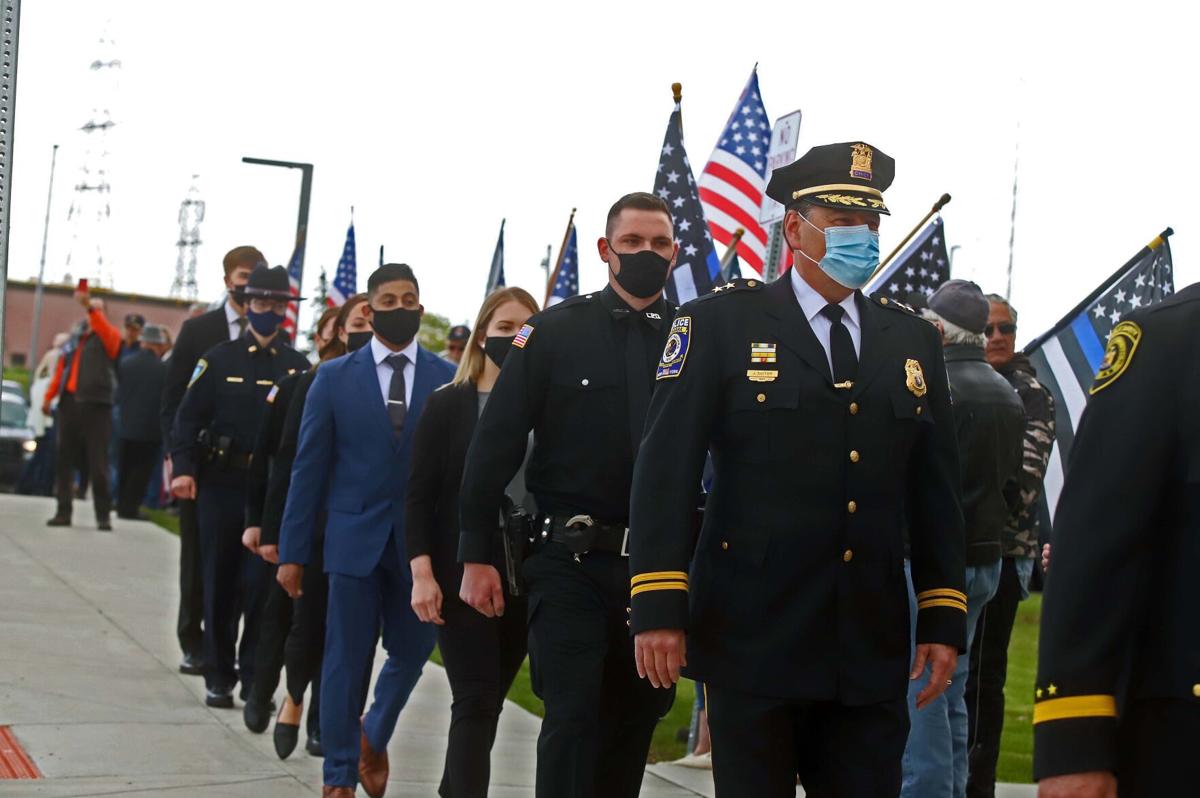 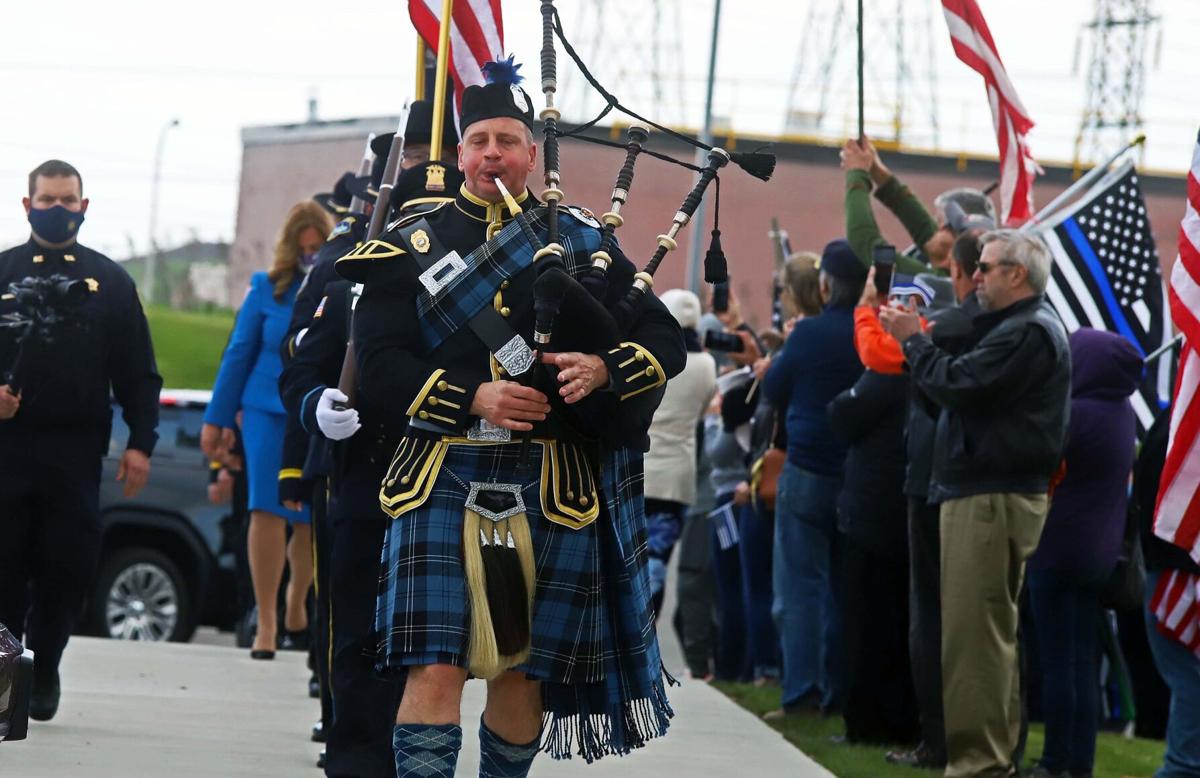 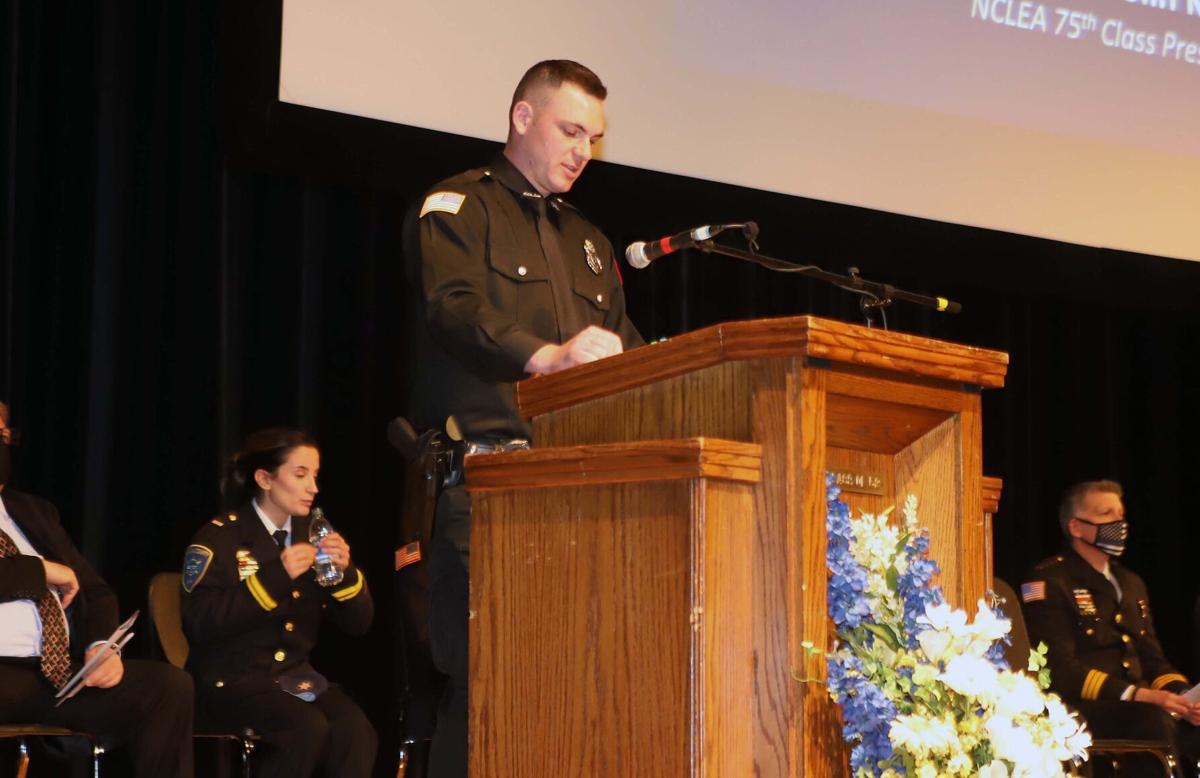 Officer Colin King, president of the 75th graduating class and a Lewiston Police recruit, addresses the class and attendees of the Niagara County Law Enforcement Academy graduation ceremony on Monday. 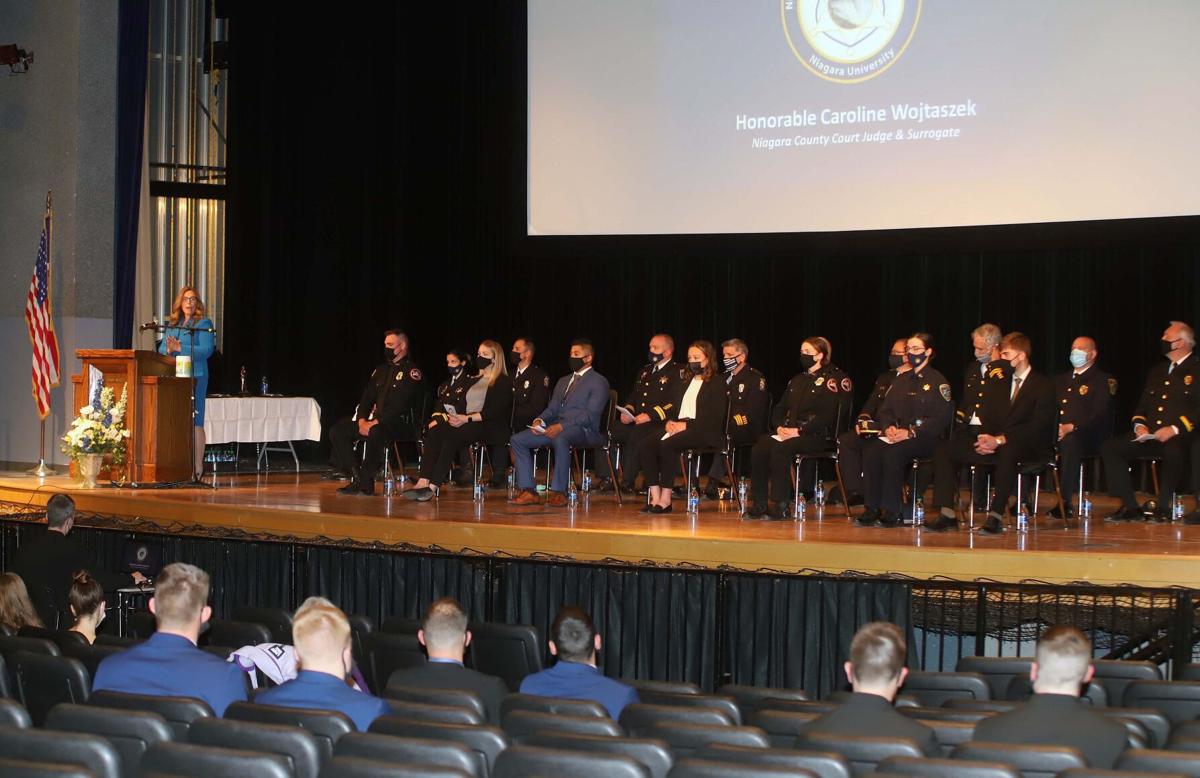 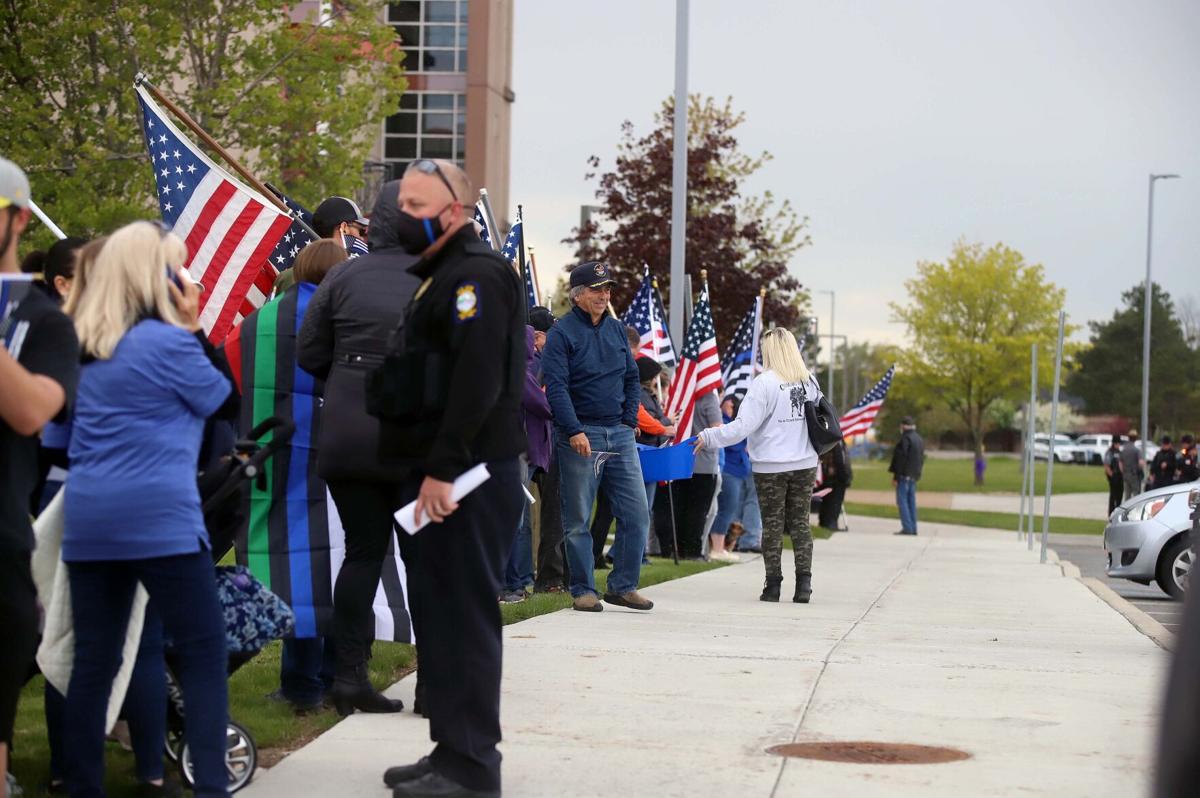 Dozens of people lined the sidewalk at Niagara Falls High School shouting “Back the Blue” for the graduates.

Officer Colin King, president of the 75th graduating class and a Lewiston Police recruit, addresses the class and attendees of the Niagara County Law Enforcement Academy graduation ceremony on Monday.

Dozens of people lined the sidewalk at Niagara Falls High School shouting “Back the Blue” for the graduates.

It began with a procession through a sea of cheering supporters and a phalanx of American flags. It ended with a standing ovation.

In between the 75th Basic Course for Police graduation of the Niagara County Law Enforcement Academy carried on like none other in recent memory.

Kayla Richards knew her interview for a job as a Niagara Falls cop "went pretty well."

Class president and Lewiston Police Recruit Colin King looked out over the socially distanced crowd of friends and family and members of law enforcement agencies from across Niagara County seated in the auditorium of Niagara Falls High School, and smiled broadly.

“How was that drive in?” he asked, referring to the the dozens of police vehicles, with lights flashing, that lined the driveway into the high school and and the flagging waving crowd that chanted, “Back the blue. Thanks for your overwhelming support.”

The graduation had been enveloped in controversy when it was announced that it would be relocated from its traditional home on the Niagara University campus to a hotel in the Falls tourist district. Publicly, NU officials said the move was necessitated by a “scheduling conflict.”

Privately, academy officials had been told the university was concerned that the graduation would attract anti-police protesters. The law enforcement academy is located on NU’s Lewiston campus as part of a collaborative program between the institutions.

When the university reversed course and offered to host the graduation, the class of cadets chosen instead to accept an offer to host from the Niagara Falls School District.

“It is such an honor for our school district to host this,” Schools Superintendent Mark Laurrie said Monday.

The superintendent said hosting the graduation was also a “perfect way” to continue efforts to establish a “junior academy” at the high school in the 2021-2022 school year.

“What a perfect way to get the momentum going for that,” Laurrie said of the new program for 11th- and 12th-graders at the high school. “It will be a way for the most diverse school district in Western New York to promote diversity (in law enforcement) all the way around.”

As part of its work with NU, the academy instructs cadets who have been hired by law enforcement agencies as well as pre-employment recruits. The 75th class began with 10 pre-employment cadets.

“This class has been the focus of intense social discussion and this class has stayed true to its principles,” Niagara County Sheriff’s Lt. Julie Kratz, one of the academy’s co-directors, said. The academy is just the start of your training. Never stop training.”

King, in his address, spoke of the challenges the academy training presented to the cadets, On his first day, King said, he thought, “Maybe I should have gone to trade school for wielding.”

But now a Lewiston Police rookie officer, King said his class faced its challenges and “united.”

“Each of us came from life experiences that shaped our reasons for a career in law enforcement,” King said. “And we knew the biggest was because we want to help people. I’m confident these recruits are up to the task. We are the 75th class of the Niagara County Law Enforcement Academy and we humbly thank you for standing with us today.”

In addition to King, three other of the pre-employment recruits have also been appointed as police officers as their time in the academy wound down. Emily Richeal was hired as a Lewiston Police officer, while Gwendolyn Schuler will be the newest Niagara County Sheriff’s deputy.

And recruit Kayla Richards, learned as she received her graduation certificate, that she has been hired by the Niagara Falls Police Department.

The graduation keynote speaker, new Niagara County Court Judge Caroline Wojtaszek, reminded the cadets of the words of Sir Robert Peele, the founder of London’s Metropolitan Police Service. At that time, Peele is reported to have said, “The police are the public. And the public are the police.”

“Remember, you are the public,” Wojtaszek said. “You can change someone’s life for the better by caring. That is truly what it means to protect and serve.”