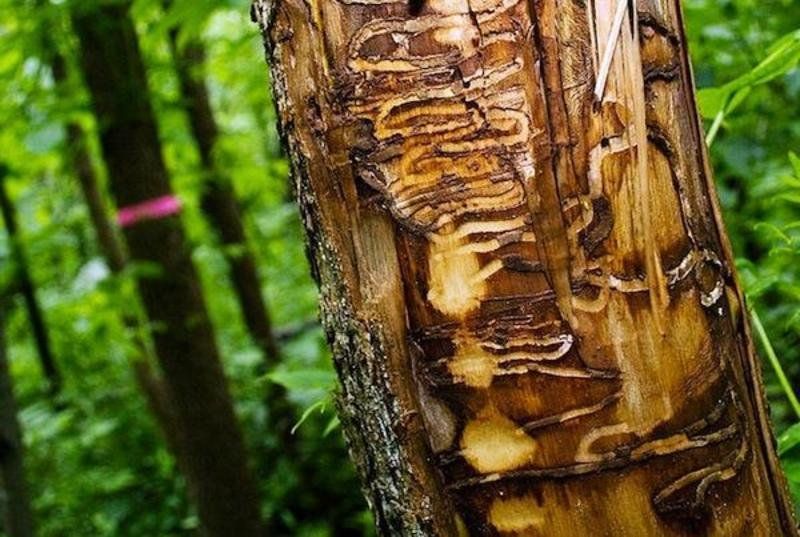 The Associated PressTracks from emerald ash borers left in a black ash tree. As the invasive species continues to decimate the ash tree population, researchers are collecting the trees' seeds for preservation. 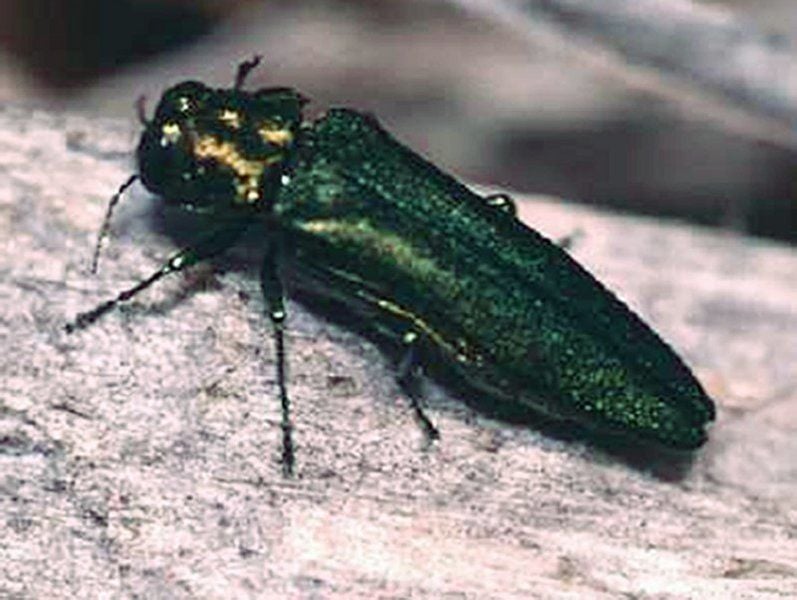 The Associated PressTracks from emerald ash borers left in a black ash tree. As the invasive species continues to decimate the ash tree population, researchers are collecting the trees' seeds for preservation.

A tree infested by emerald ash borers is indistinguishable from a healthy specimen, at first, but as the invasive beetle lays its eggs larvae begin to eat serpentine tunnels beneath the bark, feeding steadily on phloem, the vascular passageways that carry metabolic fuel from the leaves, until, slowly, it begins to wither from the canopy to the base of the trunk, strangled by the slow creep of starvation.

The borer, an invasive beetle species, takes its name from its food of choice, the ash tree. Niagara County has among the highest concentration of ash in New York, between 16 and 28 percent of the forest floor in the county have ash roots in its soil, but populations are under threat.

"The way New York state defines invasive species," Andrea Locke, the Western New York Coordinator at the Partnership for Regional Invasive Species Management said, "is any species that is not native to a habitat in question and that causes ecological harm, economic harm, and harm to human health. All of these species have the ecological impact, but some have economic impact as well."

The borer is a native of Asia that arrived in North America in 2002. Here, it lacks natural predators and an ecosystem adapted to its presence. As a result, the borer has flourished and has the potential to devastate ash species of Niagara County and the rest of New York state.

"The prevention measures put in place for Emerald Ash Borer are limited to individuals, mostly," Locke said. "There is a firewood quarantine and task forces have been brought together to try and identify infected areas."

Despite the limited county areas the borer has been detected in (most recently in 2012 at the Niagara Falls Country Club), it has already run rampant in Erie County and containment measures are delaying, not halting, the pest's advance.

According to the Cornell Cooperative Extension, Niagara is one of 13 counties across the Empire State affected by the emerald ash borer infestation. John Farfaglia, horticulturist with the extension service, said the insect often shows up in firewood, perhaps transported from a wooded area in the Southern Tier.

Adds Locke, "People are the primary means of invasive species transport, the good news is that if we're the primary vector we're the ones who can stop it. With the Mid-Atlantic Regional Seed Bank (MARSB), we are training volunteers to identify species and collect the seed to save the genetics of the trees."

Clara Holmes is a seed collection coordinator with the MARSB. She is heading up a program whose aim it is to collect a diverse range of ash species' seeds and preserve them.

As the ash population declines, Holmes said, "you're going to see the soil nutrients change, you'll see the water quantity and quality change, and you're also gong to see a likelihood of invasive species increase."

She detailed a phenomenon called the "canopy-gap," in which sunlight increases on the forest floor due to the death of older, taller trees. Any invasive species, whose reach is due in part to their ability to voraciously capitalize available resources, could thrive in this circumstance.

There are other active invasive species in Niagara County. One of particular concern may be the Japanese knotweed, a nondescript perennial that possesses mammoth strength.

"In the UK," Locke said, "Japanese knotweed has been established longer than here, and if you have it in your backyard you can't get homeowners insurance. Homes have to be foreclosed or condemned because it will grow through concrete and crack foundations"

In the event the borer does decimate the ash population, Holmes said, "We want to capture the genes of a variety of individual so we have a maximum chance to successfully reintroduce the species."

Patrick Marren, the Department of Environmental Conservation's Regional Forester, told the Gazette that "outreach and education" are among the best tools to combat the borer, "to continue to raise awareness about these threats."

In this vein, the MARSB will be conducting an upcoming ash seed collection workshop at the Burchfield Nature & Art Center, 2001 Union Rd. in West Seneca. Call (716) 677-4843 for more information.