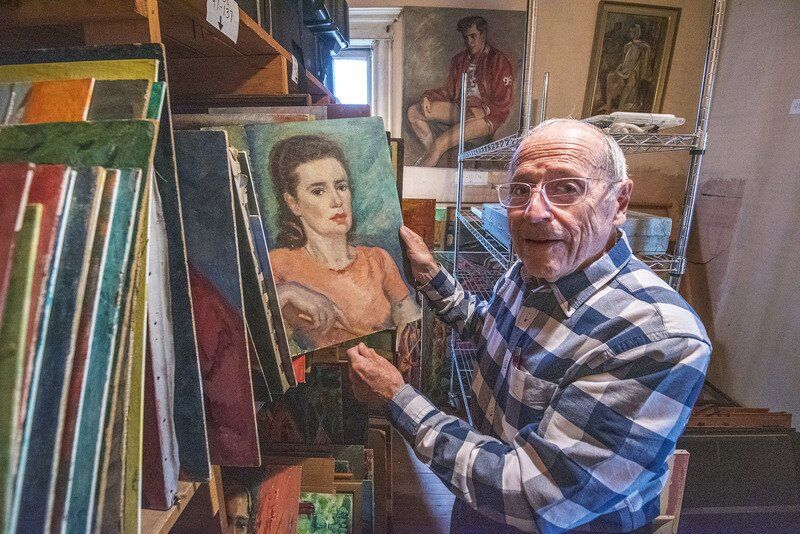 Don King shows off a self portrait painted by his mother Polly King. Don has spent a great deal of his life promoting his mother, Polly King, a prolific Niagara Falls artist. 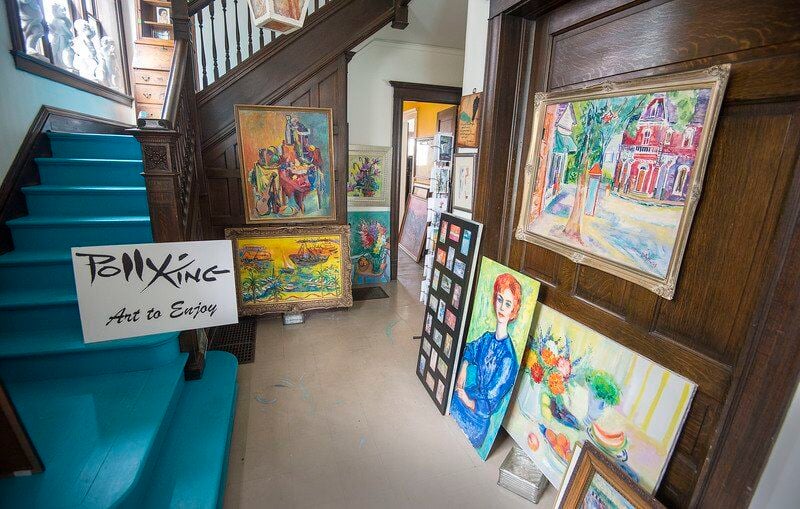 Don King maintains a gallery and archive of his mothers drawings and paintings in their old family home. 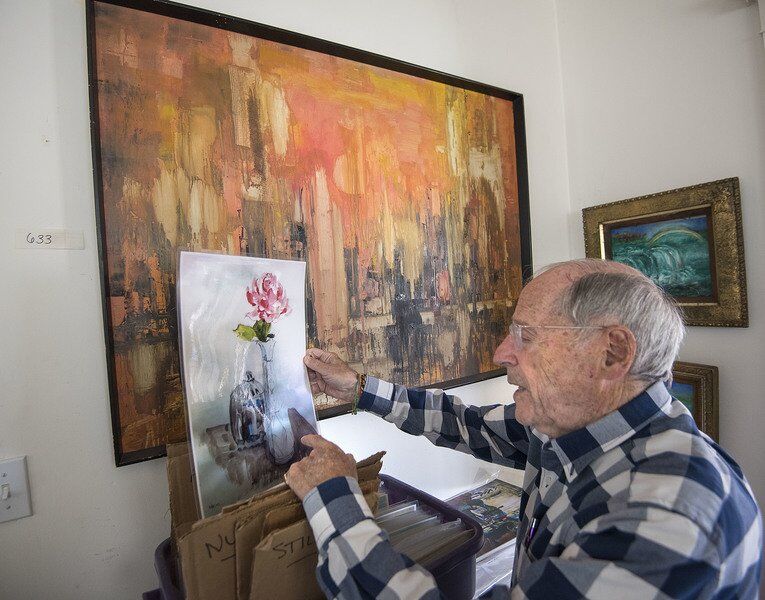 Don King shows off one of the many flower paintings by his mother Polly King. Don saves them to send to friends instead of real funeral flowers. "Flowers are temporary, a painting can turn into a lasting memory for the family of the deceased." 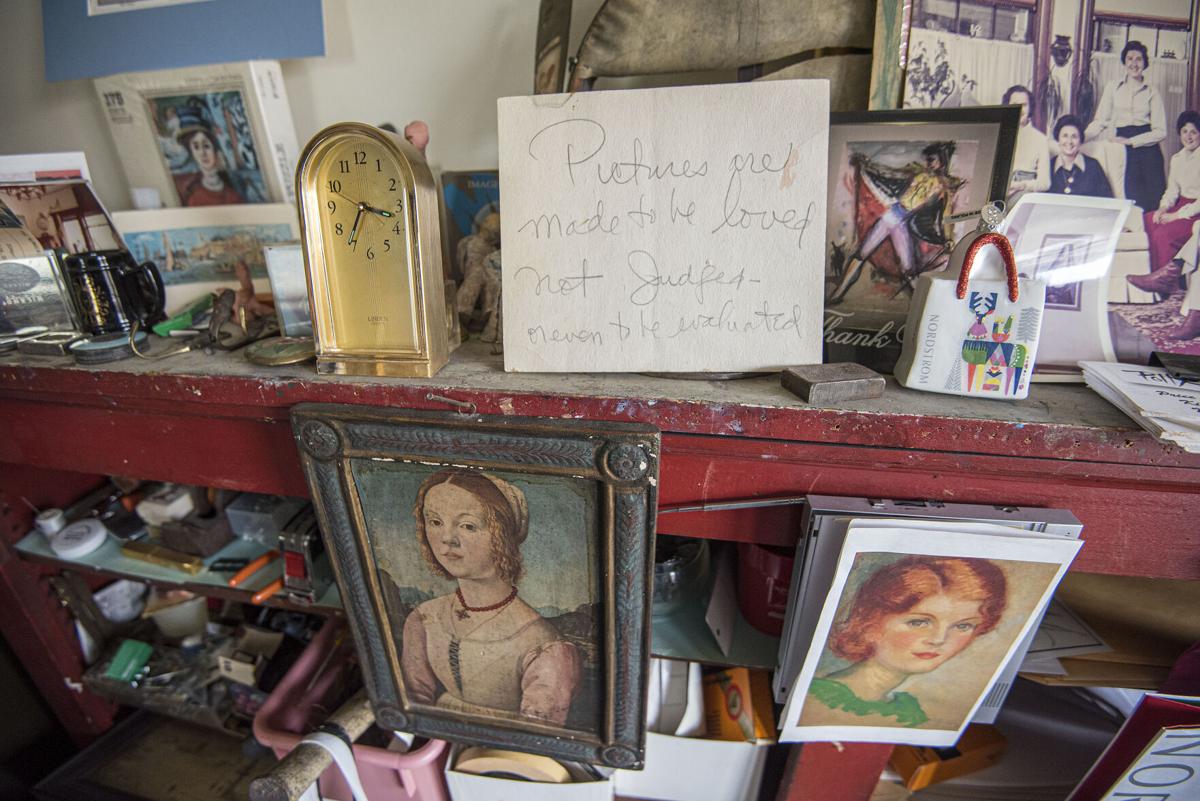 Polly Kings words "Pictures are made to be loved not judged or even to be evaluated," is centerpiece in the gallery her son Don King maintains. 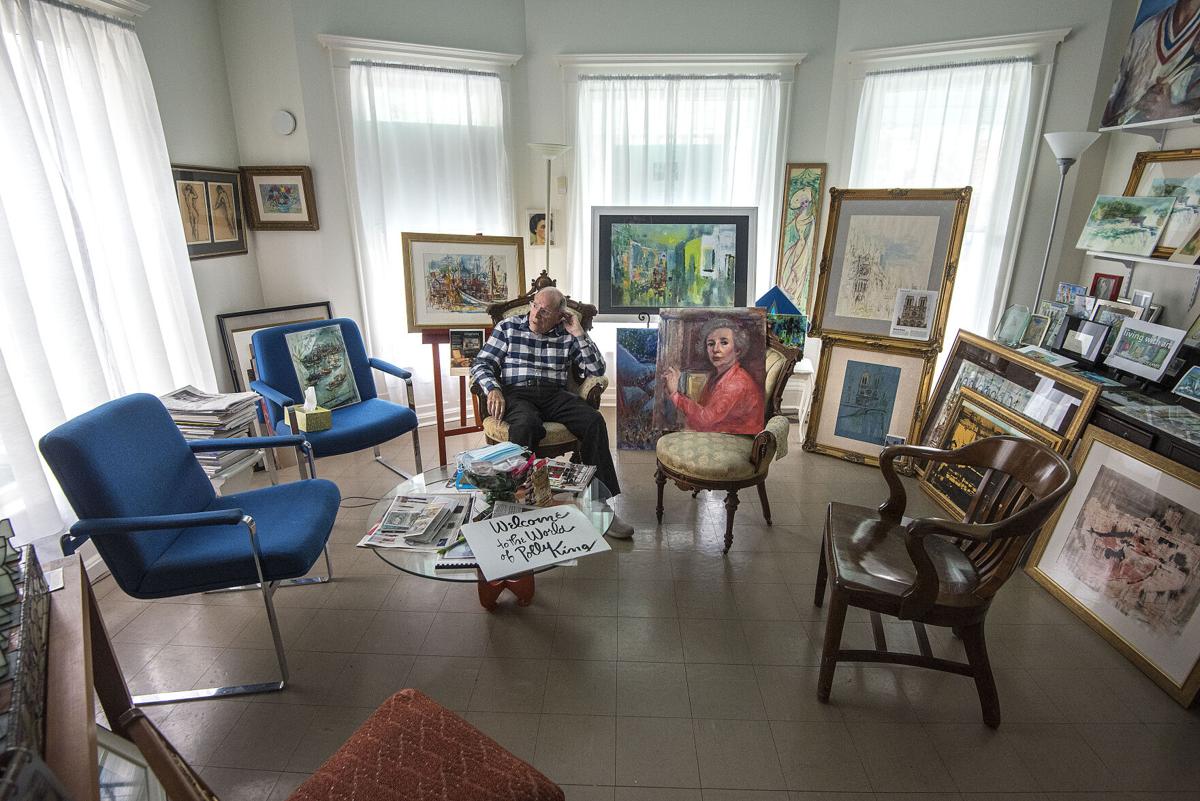 Don King oversees his mother Polly’s life work in the King Gallery while living next door with his wife Betty.

Don King shows off a self portrait painted by his mother Polly King. Don has spent a great deal of his life promoting his mother, Polly King, a prolific Niagara Falls artist.

Don King maintains a gallery and archive of his mothers drawings and paintings in their old family home.

Don King shows off one of the many flower paintings by his mother Polly King. Don saves them to send to friends instead of real funeral flowers. "Flowers are temporary, a painting can turn into a lasting memory for the family of the deceased."

Polly Kings words "Pictures are made to be loved not judged or even to be evaluated," is centerpiece in the gallery her son Don King maintains.

Don King oversees his mother Polly’s life work in the King Gallery while living next door with his wife Betty.

What better time to speak to a mensch like Don King than the week of Passover? The affable octogenarian lives on Chilton Avenue in Niagara Falls where he oversees his mother Polly’s life work in the King Gallery while living next door with his wife Betty.

To just celebrate Polly, however, is to miss the history of one of the city’s most esteemed citizens. King served 35 years on the school board as well 30 years on the boards of Niagara Falls Memorial Medical Center, Niagara Falls Library and the YMCA.

For years he was a fixture at breakfast with attorney Jim Roscetti and retired firefighter Nick Villardo.

The business of good

For a career, he ran a pair of dress shops, Wellesley in the Falls and another named Pendleton in Williamsville. Today, he remains busy. On the wall, in his mother’s handwriting at the gallery hangs a small reminder.

“It is not enough to be busy ... the question is what are we busy about?” — Henry David Thoreau.

“I’ve always been doing things but being busy about important things, that’s why Thoreau speaks to me,” King said.

“I think of a guy who’s seen an awful lot,” Restaino said. “He has been a business person, a volunteer and a real ambassador for our city.”

In addition to all those boards, there is a added heart of community service for Don, that of a Rotarian.

King was a long-time member of the Niagara Falls Rotary, a club his late friend Ron Anderluh was talking about reforming before his recent passing.

In the 1970s and 1980s the Falls Rotary was vibrant and thriving with 145 members and weekly meetings drawing visitors from afar King said. Rotarians have a tradition of visiting other clubs while traveling, both to fulfill an attendance requirement and to share fellowship and brotherhood with others of like mind.

“I think there is still a need,” King said, “especially if we become this tourist mecca because it’s such an international organization.”

Service organizations like Rotary, Kiwanis and Exchange have faded with time but King, always the forward thinker, sees a need for one master group to pull together all the good they once did and put “service about self” because as Rotary says, “the one who profits most serves best.”

Elizabeth “Betty” and Don King have four daughters, all educated professionals. They stay as busy as their father. Robin, a PhD., is a professor who teaches Latin American economics at Georgetown. She was visiting last week before returning home, but she teaches via Zoom.

Robin, in addition to her professorial duties, works with the World Research Institute, a think tank that focuses on population growth and urbanization in places like India.

How does that translate back to her hometown?

“Think about how you use land efficiently, and how you use resources,” she said. “That intersection with resources in some ways not so well cared for, is very important. There are challenges like the pollution of the past.”

That said, in walking along the river near her parents’ home, she sees a lot of change like welcoming landscaping and newly planted trees drawing people away from the commotion of the American Falls and into the beauty of the unspoiled gorge.

“Niagara Falls has hydropower and fresh water that is scarce in many places,” Robin said. “The trail should draw some people. It makes the river a lot more accessible.”

As an active parent, King said he played a role in integrating the school system. In fact his daughters were among the first bused.

The King’s other daughters are Kathryn, a vehicle designer who works for General Motors; Laura, who worked as a high level assistant for some very wealthy people and now is part of a start-up using racket sports as an outreach for the less privileged and Sara who works in marketing.

Restaino admires the King family as a unit.

“It is a tribute to him and his wife that they kept everybody in focus,” Restaino said.

King handled having four daughters with love and humor.

“I cheer for the cheerleaders,” he said.

After his wife and daughters, Don’s life is dedicated to Polly’s art.

The museum is filled with thousands of pieces because she was exceedingly prolific in a career spanning from her teen years until her death in 1993 at the age of 91.

“She was fast,” Don said. “She could do a painting in a day that would take 2 or 3 weeks for someone else.”

Robin and Don are busy at present helping a show in Indiana at The Swope Art Museum in Terre Haute, Ind. in April.

The show will be a joint exhibit of some of Polly’s best known works and those of her friend, Leroy Lamis

“Living with Art: King and Lamis” will run from April 9 to June 27.

In Indiana, the Swope is as revered as Buffalo’s Albright-Knox

Don is a firm believer that the work of artists like Lamis or Polly is rarely discovered until death.

A selection of Polly’s works is on an “art cart” at Roswell Park Cancer Institute, Don said.

“They bring it around to rooms, and if having art in a room helps someone heal, sometimes I say, ‘Just take it home,’ ” he said

In Polly’s mind, as well as that of her son, it is all about emotion.

In her studio hangs another handwritten aphorism from the artist:

“Pictures are made to be loved, not judged or even evaluated.”

For close friends and supporters, rather than Christmas cards, Don mails out calendars every year.

The museum is filled with cabinet upon cabinet, and rack upon rack of brightly colored work.

“A couple collectors said, ‘Put those away,’ when she is famous they will be very valuable,” he explained.

That curiosity is expressed in paintings of scenery, Sacre Couer in Paris as well as Niagara Falls, the construction of the Power Project and numerous portraits.

In her 80s, Polly wintered in Europe with her husband and Don’s father Marvin, a Niagara Falls attorney.

In an upstairs bedroom, window shades fell to the colorful attack of her brush. Nothing was safe.

“A painter painted the floor white,” Don said. “My mother came in and painted it with flowers, Picasso-style. ‘Mrs. King, what have you done to my paint job?’ There it is.”

Those flowers are a bit faded now, art enjoyed under foot.

Don knows he won’t be here forever guiding and promoting Polly’s legacy. One day, the task will fall to Robin, to whom the museum already technically belongs.

Don is philosophical and generous on the matter of death.

Don King in the past observed the major Jewish spring festival, which celebrates the Jews being liberated from Egypt. Ten to 15 people would gather at the Kings for a seder and reading of the Haggadah.

“Seder” is the Hebrew word for order. The different phases of the Haggadah set forth the step-by-step story of the escape from Egypt as symbolized in food and drink.

Don remains a member of the City’s last remaining synagogue, Temple Beth El but observance at the Temple will be decidedly more low-key this year.

Polly and Marvin were also members

Still, Rabbi Dr. Ellen Franke said the congregation will gather for service at 10:30 and fellowship sometime around noon.

“The tradition would be to do a Seder at the Temple,” Rabbi Franke said “but we feel we can get together a small enough congregation in a big enough building to stay safe.”

Frank said most of the Congregation, of about 20 or so, is “over Social Security age.”

For her, in semi-retirement a “very part-time job is just right.” She was called to the temple 5 or 6 years ago.

Rabbi Franke said she’s told Polly was once on the board of the Temple but didn’t last because she had little tolerance for endless meetings and preferred to stay in her happy place, creating art.

The physical building has been sold to Eyal “Eli” Cohen, with services to continue for 4 years followed by plans that involve a museum.

Cohen, an Israeli, has plans for other neighborhood development as well.