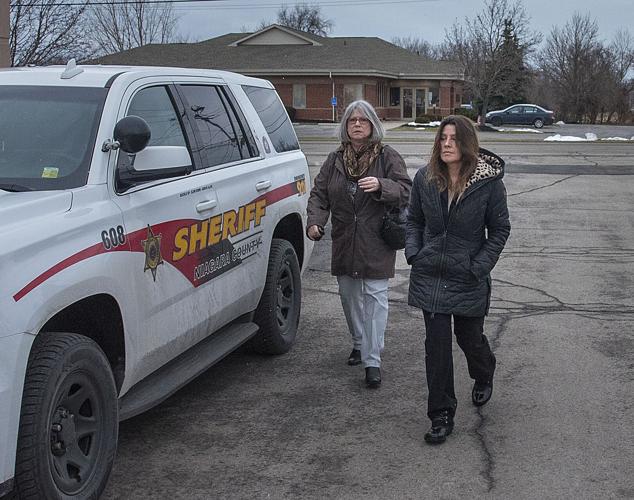 Tracy Murphy, right, the owner-operator of Asha’s Farm Sanctuary, heads into Newfane Town Court on Tuesday. Murphy is accused of larceny after she took custody of two cows that wandered onto her property last summer. 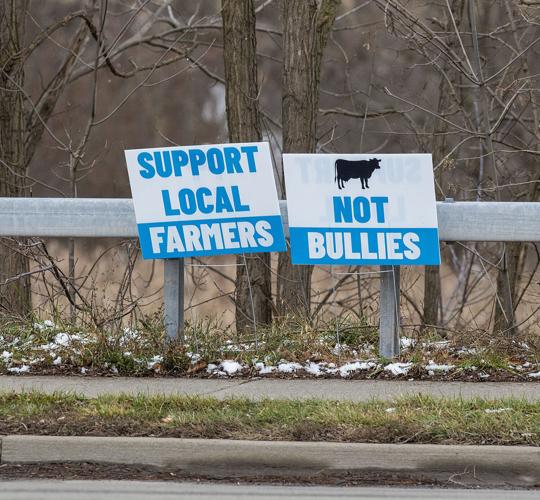 Signs like these at the intersection of Lockport Olcott Road and McKee Street have been spotted all over Newfane.

Tracy Murphy, right, the owner-operator of Asha’s Farm Sanctuary, heads into Newfane Town Court on Tuesday. Murphy is accused of larceny after she took custody of two cows that wandered onto her property last summer.

Signs like these at the intersection of Lockport Olcott Road and McKee Street have been spotted all over Newfane.

NEWFANE — On July 26, two calves wandered onto Asha’s Farm Sanctuary. The sanctuary operator, Tracy Murphy, immediately took them into her care. Six months later, Murphy is embroiled in legal proceedings stemming from that action that could ultimately land her in jail.

In Newfane Town Court on Tuesday, Murphy and her assembled legal team were met with good news. The original felony charge that Murphy was hit with, grand larceny — which carries a possible maximum penalty of seven years in prison — was dropped by the Niagara County District Attorney’s Office and replaced with a misdemeanor charge, petit larceny.

Because the lesser charge still carries the possibility of jail time, Murphy maintained her plea of “not guilty” in town Justice Bruce Barnes’ court.

Murphy’s defense team also made two motions that will be decided by Barnes. One is to lift the gag order that was previously placed on Murphy.

In addition to arguing the gag order is unconstitutional, Murphy’s team asserts that, with the order in place, their client can’t defend herself on social media as her name is being “smeared,” and she feels threatened by a finding of “guilty” in the court of popular opinion before she’s even had a trial.

“There have been death threats on social media,” attorney Wayne Hsiung said. “People are scared to work for her and she can’t even say her side and tell the truth.”

Hsiung, of California, is the executive director and general counsel of the Simple Heart Initiative, an animal rights litigation outfit. Joining him in Murphy’s defense are: Chris Carraway, an attorney and law professor in Colorado; Bonnie Klapper, a former federal prosecutor; Sara Chekroun, an attorney in New York; and Justin Marceau, a professor at the University of Denver.

The team’s second motion on Murphy’s request seeks proof that Scott Gregson is the owner of the calves that Murphy took into her care. The defense wants to see the cows as well as the paperwork associated with their sale to Gregson. So far, Hsiung said, he has been provided with two receipts, on which the descriptions of the animals did not match up with the cows Murphy took in.

“If we cannot see the cows, we can’t test them, get their age and weight. We cannot continue to litigate this case without seeing the cows,” Carraway said.

Assistant District Attorney Laura Jordan said the cows were sold to an unidentified third party after Gregson got them back, and she doesn’t know their location now.

Hsiung said the case against his client is an example of overreach by the prosecution. He asserted that 30 seconds spent with Murphy would establish that she’s a “kind soul” who only wants to help animals.

Barnes said he would rule on the motions Wednesday and contact the attorneys. Murphy’s next court date is April 13.