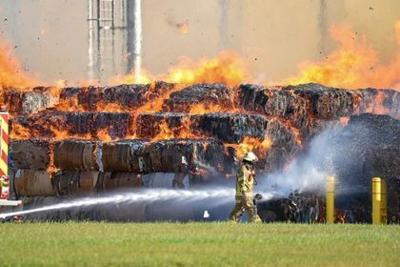 Crews from all of the city's fire departments were called Friday morning to what appears to be a large paper bale fire at the Greenpac liner board manufacturing facility in Niagara Falls.

A 2014 fire at the site, located at 47th Street and Frontier Avenue, burned for five days and required a response from Falls fire crews as well as departments from surrounding communities. At the height of its fury on Sept. 20, 2014, the flames from the blaze shot hundreds of feet into the air and the smoke plume was visible on weather radar screens. More than 24 hours later, the massive collection of cardboard bundles that had fueled the fire had been reduced to smoldering piles where flames still flickered and smoke still rose as firefighters continued to pour water on the site.

The cause of that fire was never officially determined.

Fire investigators and city code enforcement officers concluded that the manner in which the cardboard bales were stored was not a violation of the city's building codes.

Falls firefighters say they may be on-site at a massive paper fire until sometime Saturday, after the second such blaze in six years tore thro…