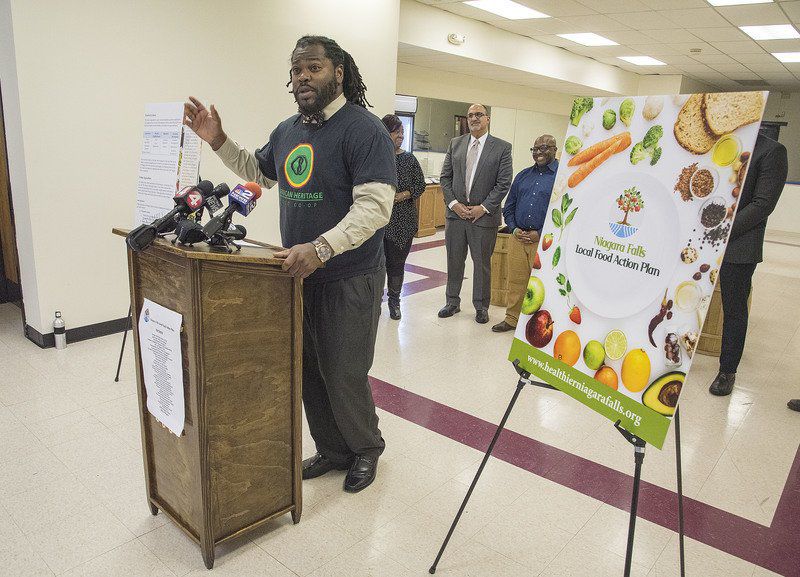 James Neiss/staff photographerAlex Wright of the African Heritage Food Co-op on Highland Avenue says a few words during a press conference on the Niagara Falls Local Food Action Plan on Jan. 24. The co-op opened for business on Saturday. 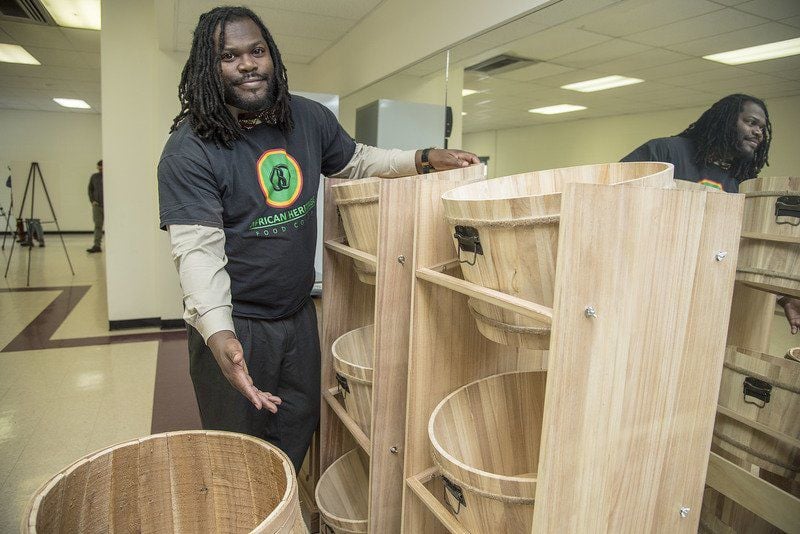 James Neiss/staff photographerAlex Wright shows off the inside of what was the still-in-progress African Heritage Food Co-op last month.

James Neiss/staff photographerAlex Wright of the African Heritage Food Co-op on Highland Avenue says a few words during a press conference on the Niagara Falls Local Food Action Plan on Jan. 24. The co-op opened for business on Saturday.

James Neiss/staff photographerAlex Wright shows off the inside of what was the still-in-progress African Heritage Food Co-op last month.

“Anything less than ownership is unacceptable.”

That’s the motto Alexander Wright has established at the African Heritage Food Co-op on Highland Avenue, which opened on Saturday. It will one day be a nexus for economic change, Wright hopes.

Wright, 39, is a native of the City of Buffalo’s east side, but he is familiar with the Falls. He dated a girl from Jordan Gardens years ago, he said and spent time here with his cousins, back in the day. His aunt was a Cataract City evangelist.

He spoke to the Niagara Gazette recently in what was then the sparsely decorated space, 2616 Highland Ave., that is now a grocery store painted in the pan-African colors. Through education and by example, Wright wants to use the co-op to work in concert with North End residents and demonstrate the democratic power of the dollar.

Gazette: How is food access in the north end different or similar to Buffalo’s east side?

Gazette: Can you explain why you’re not using the more commonplace term, “food desert”?

Wright: A desert is something that happens naturally ... With the divestment in these inner city communities – with what’s called “white flight” – that happened in the ‘50s and ‘60s, (the government) stopped putting money into these urban areas. And when you stop putting money into urban cities ... grocery stores leave, everything leaves, and you have this ghetto. They’re created. So it’s a food apartheid.

Gazette: Is the answer to the food apartheid resident ownership, corporate reinvestment or something else?

Wright: There’s a documentary called ‘Solar Mamas’ where they took illiterate women from North Africa and the Middle East and they taught them how to create solar paneling and about low-level engineering. And the reason they picked the women is because the women don’t leave.

So you put the skill set into the folks who are going to be here, then you have longevity and mission. What happens is, a non-profit comes in and invests in something, but they own it. Or another business comes in and they do something, but they own it, and as soon as they leave ... the community is back in the same thing that’s it in. It can also happen, though, with singular community ownership. Because you work hard, you provide a service to the community, but your kids don’t want to do what you do. That’s why we did a co-op, because a co-op doesn’t depend on me and my children, a co-op depends on the community.

Whether my son wants to be a grocer or not, it goes on, because somebody’s son or daughter will.

Gazette: You’ve said you wanted to use the co-op platform you described to create other community owned institutions. How?

Nobody really gets rich off patronage dividends, but here’s how it becomes great: if you have 1,000 members – our goal is 1,000 members – who shop frequently enough to where we we owe them $100 at the end of year, we can say we can give you this $100 or we can use it to invest in other businesses in the community. So we have $100,000 we can do whatever we want with. It has no strings other than the will of the membership. So now we can go to the Keybank, or an Evans Banks, and we can say Joe or Jane is looking for a loan, right? We’ll secure it. Or we’ll do something directly with Jane and invest in her business.

Gazette: Where does your vision come from?

Wright: I spent over 15 years in non-profits. One non-profit I worked in had a food pantry. So I walk in the food pantry and I see the grandmother is coming, the mother is coming and the daughter is coming. I went to the board, which made me very unpopular, and I said, “We’re a failure as a non-profit.”

And they were like, “What are you talking about? We’re providing a service.” I said, “Yeah, we’re providing service, but we’re not doing anything that allows people to be in control of their own destiny.”

What should happen is, if the grandmother has to be in the food pantry, there should be things in place to where the daughter now donates to the food pantry.

When I was a kid, we went to St. Luke’s on Miller (Avenue) and Walden (Avenue) in Buffalo. I was able to donate to St. Luke’s the passed two years. We had overages of food.

And that’s important, that’s what that’s about. We want to give people ownership and control of their own community.

It happens most other places. Why doesn’t it happen here?

Gazette: How does hiring people with a prior criminal history fit into your economic revolution?

Wright: To break it down as plain as possible: Ezekiel has a criminal record. Ezekiel comes out of prison, or has a felony or whatever it is. Ezekiel tries to get a job here, gets denied.

So if Ezekiel can’t go straight and do a thing to feed his family, now all of a sudden Ezekiel is doing the things that he was doing to put him in there, right?

We talk about reducing crime. And we spend all this money on our police forces and we pass laws about zero tolerance and all these things that put people away. That’s not a deterrent.

Because when your son or your daughter is hungry and you can’t get it from here, here and here, you’re going go and make those choices.

So what we want to do is, if Ezekiel is really trying to change and do something different with his life, we want to give him that opportunity. Because it’s important. It’s important.

Another thing we want to do here is have daycare services.

We want to have a drop-in. I want to have an elder and two or three teenage mothers, and bring them in and have them working in a daycare.

Gazette: If locals are interesting in getting a job, or becoming a member, where do they go?

Wright: They can email AHFCinfo@gmail.com.

(This interview has been edited for length and clarity.)

84, passed away January 17, 2021. Mother of Charles, Tina and the late Paul Nicastro; wife of the late Charles Nicastro. Visitation on Wednesday, 11-12:30 PM, services to follow at 12:30 PM. Visit mjcoluccifuneralchapel .com for obituary.