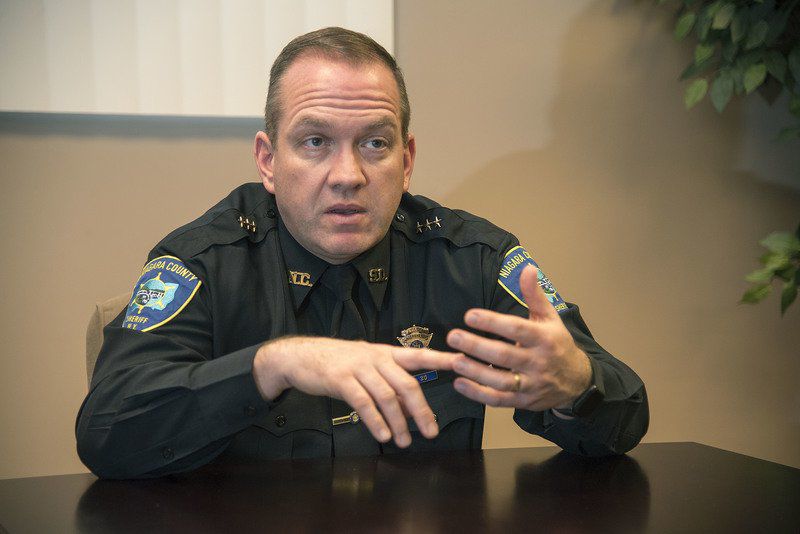 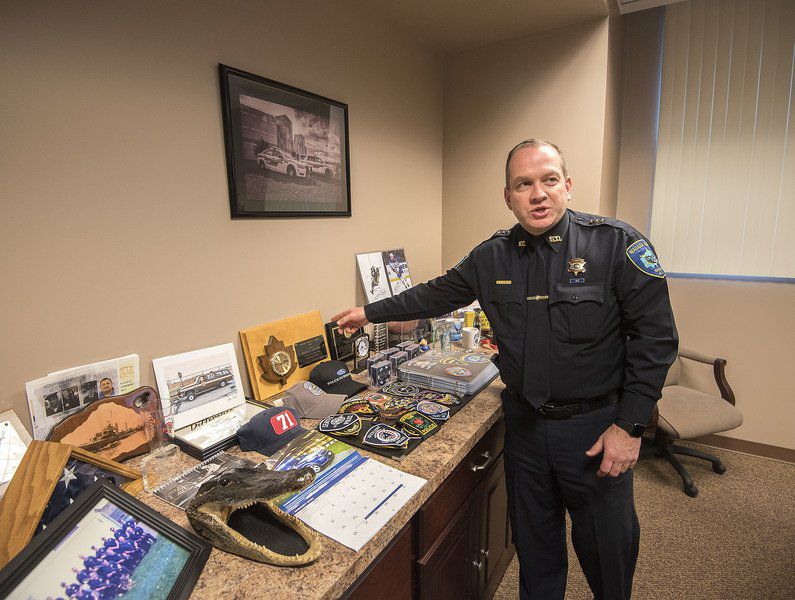 James Neiss/staff photographerActing Sheriff Michael Filicetti talks about his career in law enforcement and the personal connections he's made with colleagues and the public.

James Neiss/staff photographerActing Sheriff Michael Filicetti talks about his career in law enforcement and the personal connections he's made with colleagues and the public.

Michael Filicetti has wanted to wear a law enforcement uniform since he was a kid.

He thought it must feel pretty good to be able to help people everyday.

"I always looked up to police officers," Filicetti said. "I always thought it was such admirable job. I thought if you can make a difference in your community, what a great job to be able to go out and do that and help people."

Filicetti is no stranger to helping people.

He's been doing so for the Niagara County Sheriff's Office and, before that, the Lewiston Police Department since the 1990s.

These days, he's in charge of the sheriff's office where he started serving as acting sheriff after former Sheriff James Voutour retired at the end of December. Filicetti is seeking election this year to a full-term as sheriff.

Filicetti said it doesn't feel different being sheriff as he basically performed a lot of similar administrative tasks while he worked as undersheriff.

"I'm waiting for somebody to call and tell me what's going to be different. I have a little bit heavier schedule and a little bit more public appearances. But the nuts and bolts of the department, I've been doing that now as the undersheriff for the last eight years. I'm familiar with it. ... I know the operation here," he said.

In 1993, Filicetti graduated from Niagara County Community College with an associate in science degree in criminal justice and joined the New York State Park Police. He served as a police officer with both the Village of Lewiston and Town of Lewiston police departments from 1994 to 1997.

He joined the sheriff's office as a road patrol deputy in 1997 and rose through the ranks until he was named undersheriff in 2012.

Filicetti said community relations is very important for law enforcement as it allows residents to meet those who are protecting them.

"I don't like that image that we're here to arrest you or to give you tickets ... I want the community to know our people. Whether it's road deputies, dispatchers, corrections. We have all of them involved in community relations," Filicetti said. "And it's a trust factor. You know our people you trust them so when something bad happens you know the people that are coming to our houses or you know the people that are working in the jail or that are answering your calls."

He described the acting sheriff's position as an exciting new chapter in his life.

As acting sheriff, Filicetti leads 350 employees, and he said his mentality is to treat his employees like he would like to be treated.

"I'm firm about things but I'm also very fair. There is a human side to being a leader at this department. It's not all black and white. So I think you treat your people well. You give them a good working environment. Keep the morale up and I think the public reaps the benefits from that," he said.

Filicetti said some things he is doing to improve the office include improving the 911 center, finding funding to get more school resource officers, continuing the fight against the opioid epidemic and increasing educational opportunities at the Niagara County Jail.

Regarding the 911 center, Filicetti said early this year ground will be broken on construction of five towers to address some deficiencies in certain areas of the county for the dispatch system. Another addition will be Text-to-911, a system that allows people to text 911 dispatchers.

Filicetti said some schools do not have SROs currently and he has pledged to work to find funding for those schools.

The number of overdoses overall and fatal overdoses has decreased, but Filicetti said the numbers are "nowhere near acceptable."

In the jail, Filicetti said BOCES has partnered with the sheriff's office to provide job readiness programs, GED programs and other different programs to offer convicts a skill to try and stop them from returning.

"If we can help people get some tools while they are here maybe we wont see them back again," he said, adding that he would like to offer more skill programs.