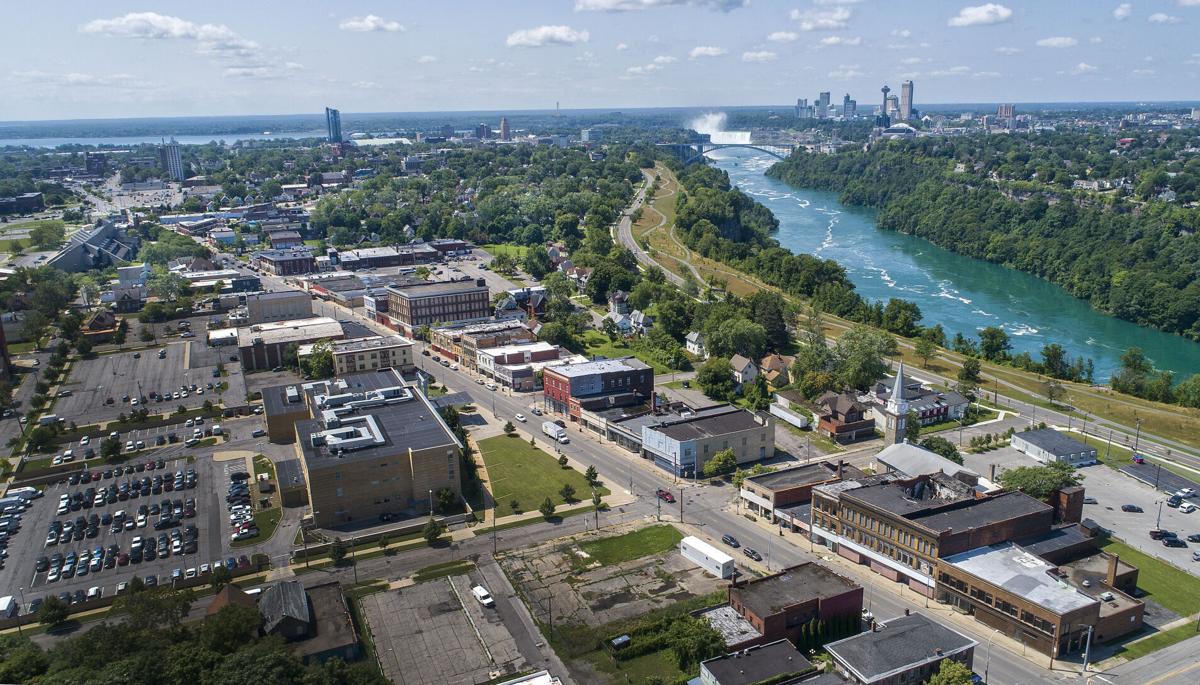 Many community members, government agencies and private investors are involved in reimagining of the Bridge District, a 26-block area anchored by Main Street. 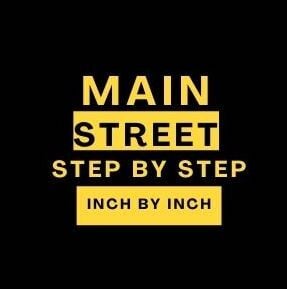 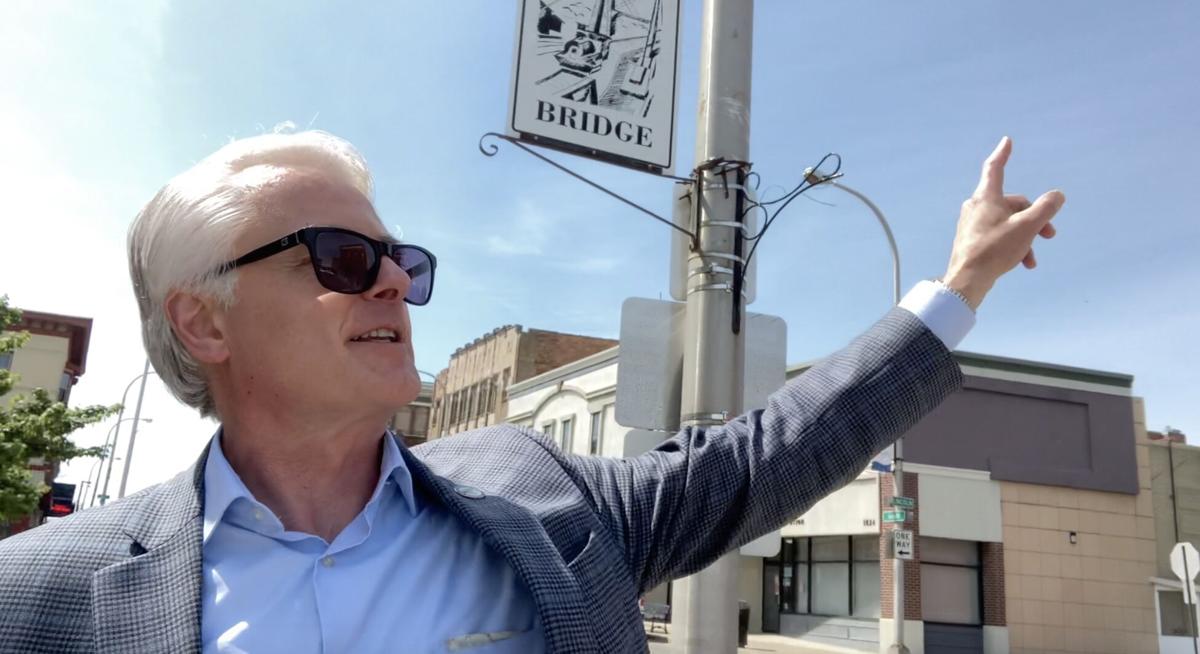 Mayor Robert Restaino points to a building among the 30 or so properties to be renovated by Blue Cardinal in the Bridge District on Main Street. 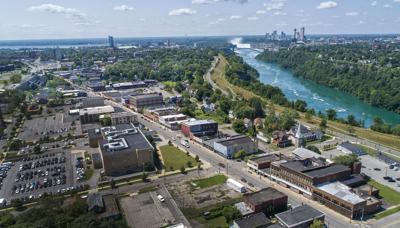 The restoration of Main Street may bring to mind an often repeated line about Niagara Falls from the famous Vaudeville sketch and the words, “Slowly I turned, step by step, inch by inch.”

In many versions, someone gets pummeled by a wild-eyed storyteller at the mention of the words “Niagara Falls.”

In real life, Niagara Falls has taken the pummeling and the only cure for the beatdown is the agonizingly slow forward movement of inches and small steps.

The years have been especially unkind to Main Street.

In 2001, a reporter from the New York Times visited the Book Corner on Main Street, a welcoming three-story tribute to wise words and engaging thoughts, standing alone among mostly boarded buildings.

The reporter interviewed owner Jeffrey Morrow, who was then one of the last holdouts on a stretch of blight that resembled a war zone of urban decay. The reporter dubbed the store “A beacon of light in a pall of blight.”

If that same reporter came back today, he would find not much has changed.

The only buildings with activity are the 10-year-old police headquarters, a modern brick edifice that looms without warmth over the street, just a half-block from the book store. There is also the magnificently restored Rapids Theatre, which in 2009 was polished like a gemstone to its original gleam, and now draws hundreds to the street for hip concerts, elegant weddings and other joyful events, all of which are mostly high-end entertainment until attendees walk back out onto the grim street.

The good news is that, after decades of despair, things may be about to turn around.

Mayor Robert Restaino, on a recent walk along Main Street, recalled happy memories there from his childhood and described how the vacant boarded buildings were once beautiful and full of life.

He recalled Main Street as typical Americana, and shared memories of how brilliantly it was lit for Christmas each year.

“It was, I suppose, sort of like a Hallmark movie,” he said.

And while Main Street hasn’t been a Hallmark movie for a long while, it could be again, even if the going is inch by inch.

Many are investing time and money to restore life to Main Street. Of course, there are naysayers, like the Book Corner’s Morrow, who don’t want to get his hopes up yet again. He looks outside each day to mostly empty sidewalks, his book store only alive post-COVID-19 thanks to loyal customers on both sides of the border and his attention to their needs as readers and collectors.

“I’ve seen nothing happen, that’s why I’m very pessimistic,” Morrow said of Main Street. “Not that something won’t happen eventually, but it’s not going to be within the lifetime of the Book Corner,” he added. “I’m going to retire when I turn 65 and a half, May 31 of 2023, and that’s when the Book Corner is over.”

He does admit that some impressive progress has occurred just around the corner, since the removal of the Robert Moses expressway and the opening of the gorge to the city streets, creating a vibrant, wildflower-dotted greenway that draws locals and tourists to the new walkable trails, overlooks and bike pathways.

Morrow drives through that greenway every day and calls it the greatest thing that happened to the city in recent memory. “It looks great,” he said, “and it’s a definite positive.”

Last year, right before COVID-19 hit, a $10 million grant was awarded to the City of Niagara Falls in a New York state program designed to inspire and support main street renovations throughout the state. Restaino called it “an enormous win” for the city. “It impacts everything,” he said.

It was the city’s plans for the Bridge District, a 26-block area anchored by Main Street, that helped win the top prize that is offered by the state each year. The award came as a result of several factors stated on the application, including the restoration of the gorge greenway, the completion of a new Bridge District train station and Underground Railroad Heritage Museum, the continuing strength of DiCamillo Bakery in the district, the support of Niagara University, and the purchase of a portfolio of about 38 pieces of mostly long-vacant property by Blue Cardinal, an investment firm from Buffalo who purchased the portfolio for $3.2 million from Niagara Falls property owner Richard Hastings.

Any developer will say the $10 million is a drop in the bucket where restorations of neighborhoods occur. But the many city and state redevelopment experts, the citizens who shared their time and opinions, and both mayors involved in the project, Restaino and former Mayor Paul Dyster, believe the money can be used to beautify and fortify the street, to make it an alluring canvas for creative rebuilding.

“We need to make the welcome mat appealing,” Restaino said during his walk down the street, his pace interrupted now and then by those who recognized him with a honking car horn and a friendly wave. “If we’re able to improve the streetscape of Main Street and the facades and the life of this place, it will clearly make it, I believe, much more inviting to the private investor.”

Bob Richardson of Blue Cardinal is key to the plans, holding on to a portfolio of mostly once beautiful boarded buildings, some beginning to crumble from the ravages of weather and time.

Richardson had a major investor from Rochester involved in the deal, but that developer had to pull out because of federal conspiracy charges. Now Richardson says he has another major investor he is close to signing contracts with. But, this investor or investment group is so big, it will be backing his entire portfolio, he said.

First things first. There is $10 million that needs to be spent to ready the ground and sweeten the deal.

TOMORROW: Main Street after the $10 million.

EDITOR'S NOTE: This is the second part of a four-part series on Main Street running this week in the Gazette.