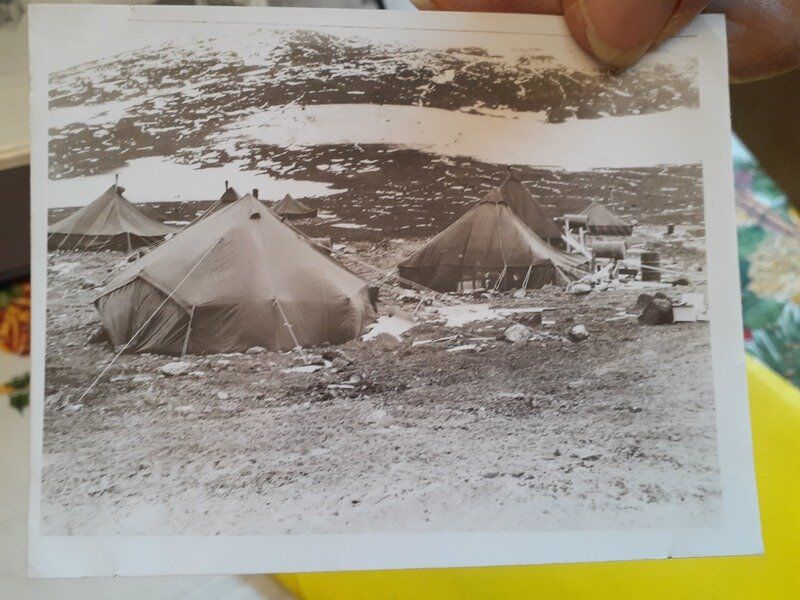 A photo of the camp site Glenn Foley stayed in while in Antarctica. 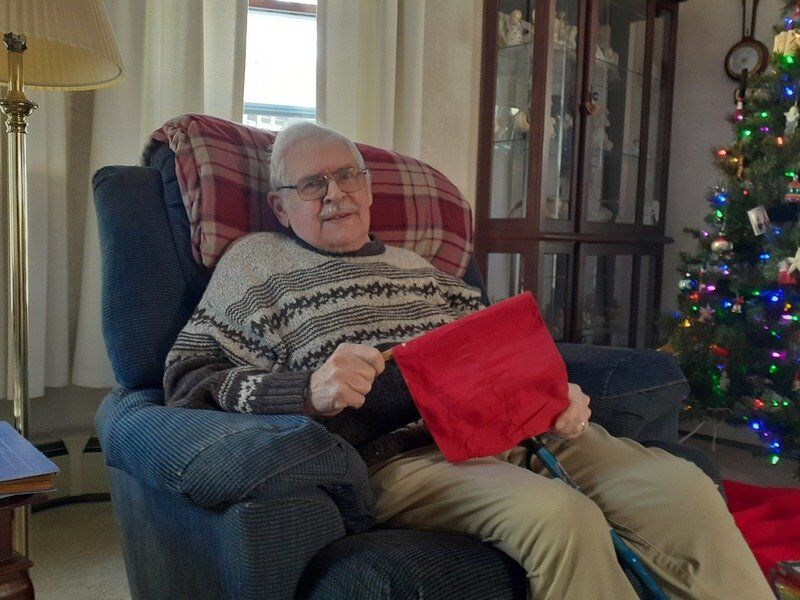 Glen Foley and his red marker flag he took as a souvenir from the Deep Freeze I expedition in Antarctica. (Photos by Jacob Fries) 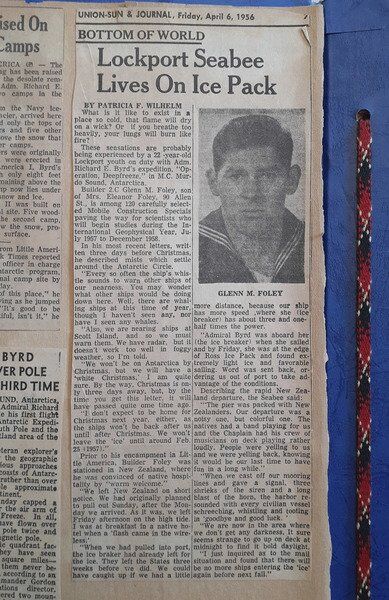 A clipping from a 1956 edition of the Union-Sun and Journal about Glen Foley, and the Deep Freeze I expedition.

A photo of the camp site Glenn Foley stayed in while in Antarctica.

Glen Foley and his red marker flag he took as a souvenir from the Deep Freeze I expedition in Antarctica. (Photos by Jacob Fries)

A clipping from a 1956 edition of the Union-Sun and Journal about Glen Foley, and the Deep Freeze I expedition.

LOCKPORT — If you think that Western New York is bad this time of year, try Antarctica. One Lockport native actually knows what both are like.

Glenn Foley is a veteran of the U.S. Navy, and was a member of the Naval Construction Battalion, commonly referred to as the Seabees. The Seabees, founded during World War II, were tasked with constructing military bases in hostile areas, where civilian contractors wouldn’t be permitted to go. During World War II, these soldier-construction workers were instrumental in building military bases on islands in the Pacific Theater.

Foley enlisted in the Navy during the Korean War in March of 1953. Both sides of his family had traditions of being in the Navy. At the time, he wasn’t sure what he wanted to do in the Navy, but when he told his placement officer that he had experience in carpentry with his father, he was recommended to join the Seabees as a builder.

After Naval boot camp, Foley went to construction school at the Seabee base in Port Hueneme, California. After his training, he applied to join the newly formed Mobile Construction Battalion Special that would be sent to Antarctica.

The Korean War ended while Foley was still training, but his time as a Seabee would instead be spent as a part of “Operation Deep Freeze I.” This operation was led by the famous American admiral and Arctic explorer Richard Byrd on his last expedition, and his successor Rear Admiral George Dufek. Foley recalled how fascinated he was with the stories of Byrd's prior expeditions, when he was told about them as a 10-year-old in grade school.

“When I was in a one-room grade school out in Wyoming County, this teacher told us about Richard Byrd, and it fascinated me.” said Foley, “Fifteen years later, the opportunity came up for me to go to the Antarctic, so I put in for it.”

“Operation Deep Freeze I,” was the first part of an international mission to establish long-term scientific facilities in Antarctica. It was a joint operation between the US, UK, New Zealand, France, Japan, Norway, Chile, Argentina, and the Soviet Union. Foley recalled that the expedition started earlier than expected due to a particularly “warm” spell in Antarctica that year, which would make things more ideal for construction.

“When we got to New Zealand, we were supposed to have 10 days of shore-leave,” said Foley. “But Byrd was in the Antarctic Circle by now, and he saw how good the weather was compared to his previous experiences. So he wired back ‘All-ships-to-sea,’ so all of us guys who were expecting to spend 10 days in New Zealand only ended up getting five.”

He departed to Antarctica from New Zealand aboard the attack cargo ship, USS Wyandot, and arrived in January of 1956. Regardless of the good weather for Antarctic standards, Foley and his other Seabees still needed to traverse a large field of ice to get to the construction site. Caterpillar tractors had to pull all their cargo on sleds for over 10 miles to camp.

The first building that Foley helped to construct was a canteen, then they built other essentials like barracks, utility structures for water and electricity, a repair shop, and a chapel. He felt a little star-struck when he was eating in the same mess-tent as Admiral Byrd, during the expedition.

“I was in the kitchen tent, and here’s Byrd and Dufek inspecting the food facilities, and they too had just eaten” said Foley. “They had to see if the food was good enough for the Seabees. They sweated the chow-line, the same as us.”

A particular and frequent camp nuisance were the penguins.

Due to whales being the only predator to the penguins in Antarctica, penguins were never really bothered by humans in their habitat.

Some of the mementos Foley still has include a small red marker flag that's pole was made from Panamanian bamboo his ship picked up on the trip to Antarctica. The flags were intended to keep personnel from getting lost in the blustery Antarctic conditions.

“You’d want to make a trail, because if you’re in a whiteout, you wouldn’t be able to see” said Foley. “You could wander off anywhere, and go around in a circle and not know it. This one broke, so I thought that would be my souvenir.”

He also has a copy of an edition of his ship's newspaper from Dec. 2, 1955 which had an article telling of 20-inch snow conditions in Buffalo the previous month. Foley found the situation ironic, considering he was going to a balmy Antarctic summer. His mother had collected numerous articles from the Lockport Union-Sun & Journal, and the Buffalo News about the Deep Freeze expedition, which he still keeps in a scrapbook.

Foley left Antarctica before the southern-hemisphere winter set in, and returned to the United States in 1957 when his service period ended. Back in the states, Foley went to study construction at Erie Community College, and then got a job as an electrician in 1963 with the Harrison Radiator Division in Lockport. He married his wife Leah the following year. He credits the work of the Navy in being able to teach someone a trade that they can turn into a career when they return to civilian life.

“In the Navy, they teach you a trade” said Foley. “There’s all kinds of things that you can learn in the Navy that you can find work in when you come out.”

At the time of his adventure, Antarctica was one of the last uncharted landmasses on Earth, and thanks to the work of Builder First-Class Foley and his fellow Seabees, we have since come to understand more about the mysterious far-away continent.