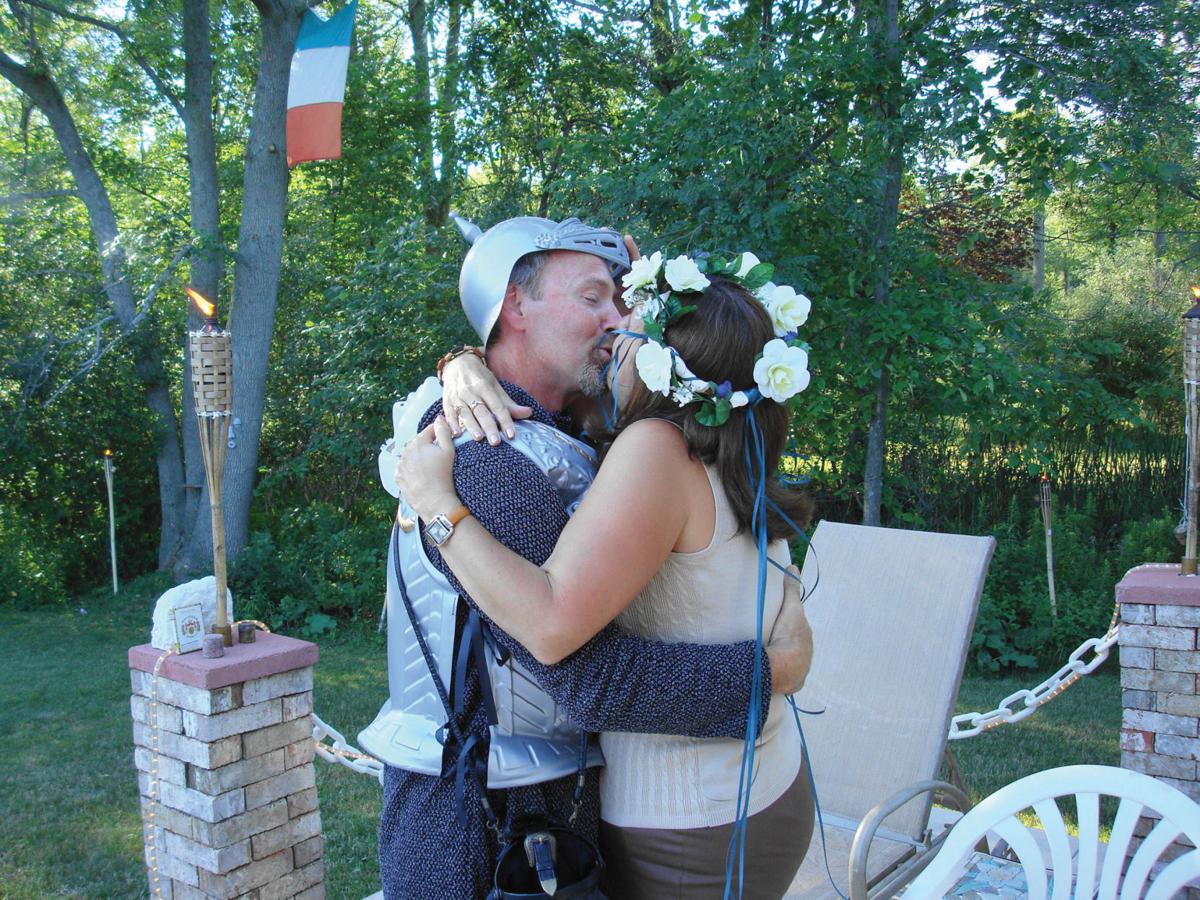 Angela Accardo, guidance counselor at Gaskill Middle School, with her finance Vito Mecca, after he proposed to her dressed as a white knight in shining armor on a white horse. 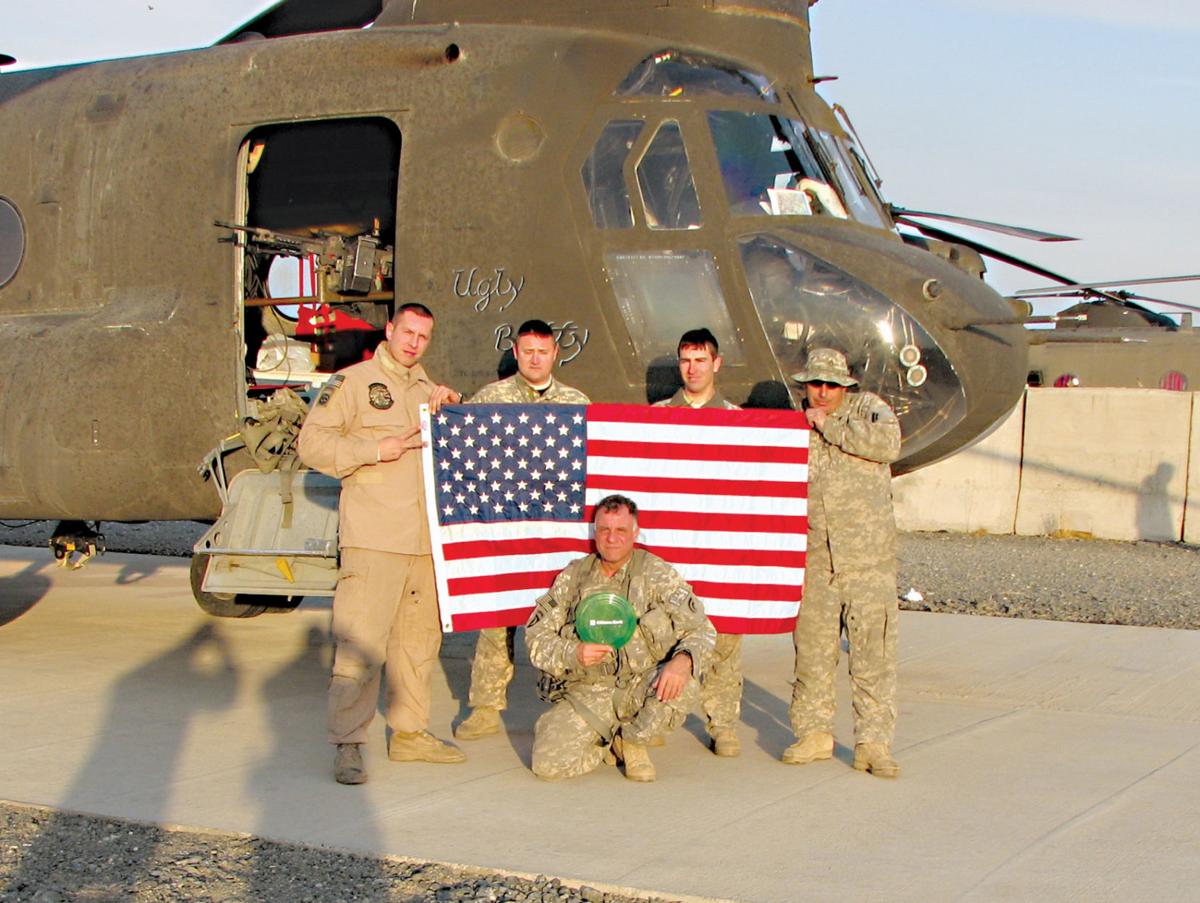 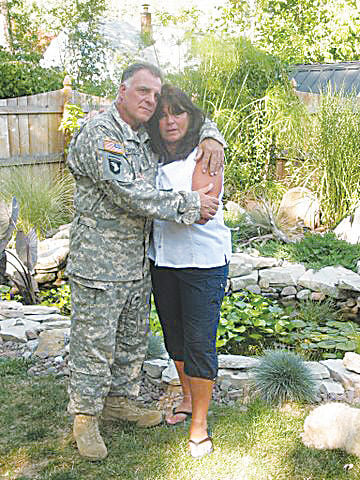 Angela Accardo, guidance counselor at Gaskill Middle School, with her finance Vito Mecca, after he proposed to her dressed as a white knight in shining armor on a white horse.

One man went on a wartime helicopter mission and dedicated it to his wife’s employer. Another dressed up as a white knight and proposed atop a white horse. Those dramatic gestures are just some of the ways that people in the Niagara region have shown their love to each other. Hard acts to follow, surely, but the gestures may inspire others to think about expressing themselves to those that they love, not just for Valentine’s Day, but on every day of the year. Surely, no matter what relationship challenges lie, Angela Accardo of Niagara Falls will always have the memory of the day her fiancé, Vito Mecca of Grand Island, popped the question. They were having a little backyard cookout with some friends when Vito left “to go to the store.” Suddenly, her friend, local singer Chris Curtelli, was up on the roof of the garage singing “Some Enchanted Evening.” “The next thing I know, here’s this knight coming into the backyard with one of those tiki torches, and he’s looking for his Lady of Camelot.” Accardo, a guidance counselor at Gaskill Middle School in Niagara Falls who met Mecca when he was painting the school, was suddenly transported into the chivalrous days of yore. As the knight moved around the yard, he questioned all the guests, looking for his lady. Then he got to Accardo. “He gets off his horse and gets down on one knee and he says, ‘Lady Angela, can I have your hand in marriage?’ ” she said. “My romantic reply was, ‘Is this serious? Are you kidding around?’ ” The grand romantic gesture is always a little unbelievable, according to those who have been on the receiving end. But it seems that the type of person who makes the grand gesture is also the type to make small gestures of love as well. National Guard Pilot Frank Rotella is a “tough guy” who reads books to children at elementary schools in Wilson and Starpoint, his wife said. He’s the kind of man who makes his wife feel protected and loved. When he first left for Afghanistan, she had to struggle a bit to adjust to his absence. “The first couple of months were really hard, but I’m over that now,” she said, her voice breaking just a bit as she said the words, and giving away her composed resolve. Just before Frank deployed in May, Gloria’s employer — Citizens Bank — gave her a week off with pay so she could spend time with him. It’s standard bank policy to do that for military families, said Stephen Scello, regional manager for the bank. Frank was grateful to the bank and dedicated one of his helicopter missions to Citizens Bank. In an e-mail from Afghanistan, Frank described the flight dedication process. “Flying flags on combat missions is an old tradition among air crewmembers. They dedicate flags to family, friends, employers and organizations who have shown them support.” The pilot gets to dedicate three missions a year. The e-mail continues: “I personally have sent flags to my niece and daughter-in-law whose elementary school classes have sent me and my unit cards, Christmas decorations and letters that they made themselves. It really touches you to read them because you know they come from their hearts and that they feel proud that they are doing good for someone. I think it is a good ‘life lesson’ for them and a step toward becoming responsible citizens.” So, one day Frank got into his CH-47 helicopter and flew a flag for Citizens during a mission to get supplies out to the troops. The mission, flown for his wife’s bank, was a clear message to his wife. Frank defined his feelings in the e-mail: “My wife is my best friend and soulmate. She is not happy that I am deployed but understands why I am here and supports me in every way ... this goes for my whole family and circle of friends.” That flag that flew on the helicopter during that mission has now being sent to the bank, and Scello said it will probably be displayed at Citizens headquarters in Albany. Frank is expected home in just a few months, and Gloria, their two sons and their families will be waiting to express their own gratitude for his service. ”There’s not many men who would do that,” Gloria said of the flight dedication. “He’s a special guy.” So, the painter who dressed as a knight and the pilot who honored his wife’s business demonstrate for all that sometimes life can be better than a love story. “The Lady of Camelot,” surely will always remember the day she rode on the back of a white horse, stopping traffic on Grand Island’s Stony Point Road. The knight’s lady offered some words of advice to those awaiting their own grand romantic gesture, noting it wasn’t the knight, really, but the man who won her heart: “Don’t give up hope. When I least expected it, a painter came down the hallway,” she said, adding that as a result of that chance meeting, “I couldn’t ask for anything more.” Contact editor Michele DeLuca at 693-1000, ext. 157.