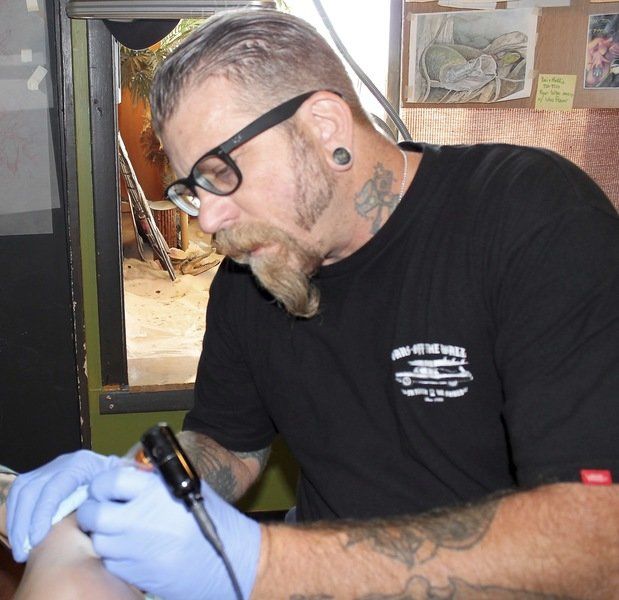 MIA SUMMERSON/staff Rick Deville of Twisted Tiki in North Tonawanda has performed nearly a dozen nipple and areola reconstruction tattoos. He said giving a woman a piece of her confidence back after a mastectomy is highly rewarding. 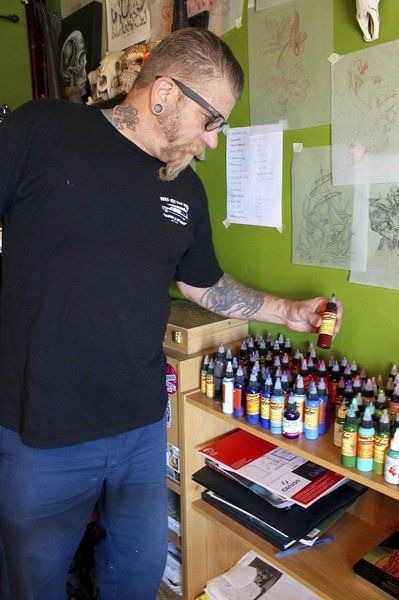 MIA SUMMERSON/staff Rick Deville says that a number of colors go into recreating the three dimensional image of a natural looking breast. While he combines typical skin colors to match a clients complexion, he also uses more unexpected colors to accomplish depth that includes highlighting and shadowing.

MIA SUMMERSON/staff Rick Deville of Twisted Tiki in North Tonawanda has performed nearly a dozen nipple and areola reconstruction tattoos. He said giving a woman a piece of her confidence back after a mastectomy is highly rewarding.

MIA SUMMERSON/staff Rick Deville says that a number of colors go into recreating the three dimensional image of a natural looking breast. While he combines typical skin colors to match a clients complexion, he also uses more unexpected colors to accomplish depth that includes highlighting and shadowing.

Women who are diagnosed with breast cancer have challenges to face, both physically and mentally, and on top of it they’re often forced to deal with unwelcome changes to what they see when they look in the mirror.

Whether it’s the loss of hair or a mastectomy, its easy to lose confidence when a disease causes so much of a victim’s life to change. Fortunately there are options to help these individuals find a little comfort, and some of those options can be found in some of the most unexpected places, like a tattoo shop.

Nipple and areola reconstruction via tattoo is a trend that’s picking up around the country and while not many shops offer the service in Niagara County, it is available in neighboring communities. Take for example Rick Deville, of Twisted Tiki Tattoo in the City of Tonawanda. Deville was inspired by a personal experience to use his talents as a tattoo artist to bring a little normalcy back into the lives mastectomy patients.

“When women have their breasts removed it’s so devastating and debilitating, and when they see that they actually look normal again, it’s this weird overwhelming feeling, like a happiness,” Deville said. “When they’re able to once again look themselves in the mirror, it brings tears to their eyes and to me it’s an unbelievable achievement to help a woman feel like a woman again — like herself again.”

To date, Deville has done just shy of a dozen of these procedures. The process takes approximately two hours for one side, or three to four hours if work is needed on both sides.

The goal of the tattoo is to produce something as realistic-looking as possible. To accomplish this, Deville mixes a variety of skin-tone colors, along with some more surprising colors like purples or blues, to create a color set that both appropriately matches the complexion of the client, but also has a three-dimensional look complete with shadowing and highlighting.

At the end of the day he says that just seeing his client’s reaction is all the reward he needs. They often say that getting the reconstruction tattoo helps them to feel like they have their own bodies back. To them it’s more than just a tattoo.

“Unlike other cancers, breast cancer is so visual,” Deville said. “It’s so connected to the female psyche and being able to bring a woman back to having some sort of pride in her body and appearance is really rewarding.”

The general cost of a tattoo like this is hard to predict, though Deville said that on average he charges around $500 per side. Factors that can contribute to the price is how well the breasts themselves were reconstructed by surgeons.

Twisted Tiki is just one place where patients can go for a nipple reconstruction tattoo. Also located in the City of Tonawanda is Custom Beaute, a Permanant Makeup, Dermal Solutions and Wellness Clinic. Sherry Hale, who performs the procedure, has been doing it for six years.

“I love being able to empower women to have more confidence and live free,” Hale said last year. “Women that receive my procedures frequently cry out of happiness to just have some sense of normality back in their lives.”

Niagara County breast cancer survivors can also find access to nipple reconstruction procedures just across the boarder on Niagara Boulevard in Fort Erie, Ontario. A Tat of Class is another option for women seeking to get the tattoo, or as they call it micro-pigmentation. Jennette Conners started off as a fine artist, but found herself doing tattoos almost by accident. She started doing reconstruction and scar coverage tattoos after a conversation with a friend who had survived breast cancer.

In addition to areola reconstruction, Conners also does two-inch pink ribbon tattoos for $50 during the month of October. She also does these for tattoo parties, noting that it can be a nice way for a group to collectively honor the memory of a loved one who lost their battle with breast cancer.

She said being the final piece of the process for women in recovery is an honor and that she’s happy to be the last step on the road to looking like their old selves again.

To say that breast cancer is taxing on a woman is an understatement, and the weight of a mastectomy can rob a patient of not only her breasts, but a part of her identity as well. These services give them a chance to regain some self-esteem and help them to feel not like a victim, but like a survivor.