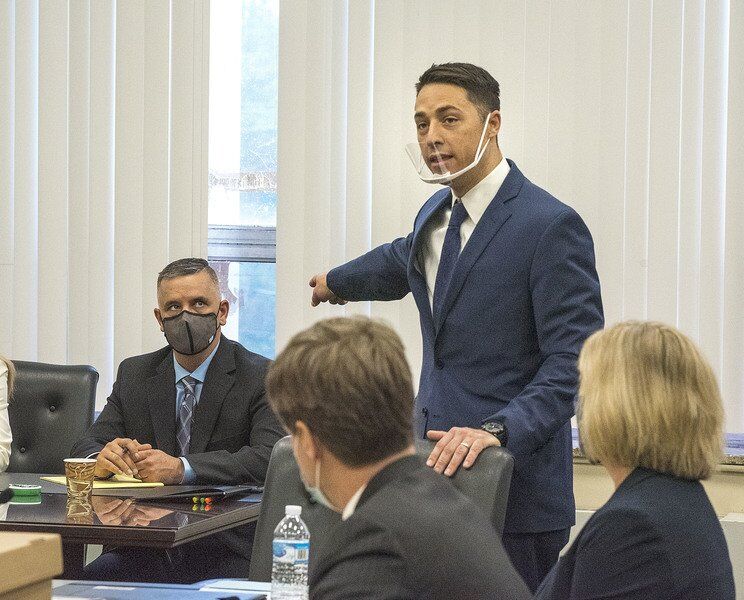 Niagara County Assistant District Attorney John Granchelli begins his opening statement Monday at the trial of Joseph H. Belstadt for the 1993 death of Mandy Steingasser, 17, of North Tonawanda. Belstadt is the masked man at the table. 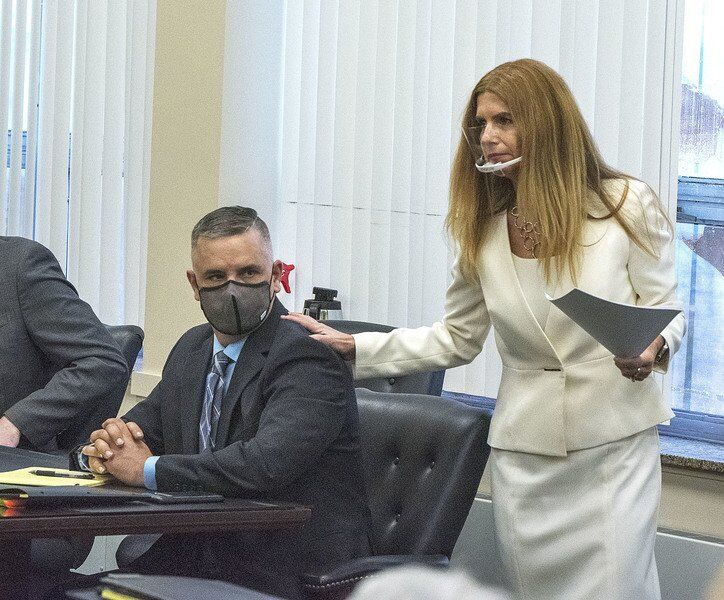 Defense attorney Michelle Bergevin heads to the podium to begin her opening remarks on Oct. 25 on behalf of defendant Joseph H. Belstadt on trial for the 1993 death of Mandy Steingasser, 17, of North Tonawanda. 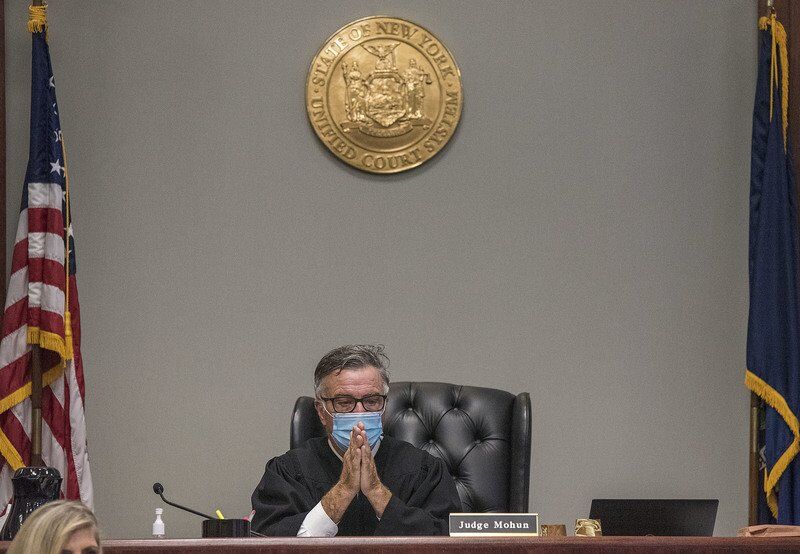 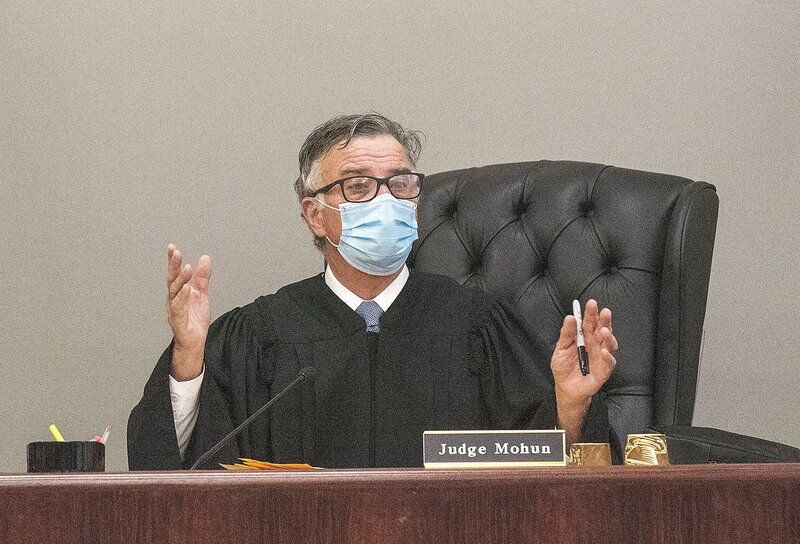 Niagara County Assistant District Attorney John Granchelli begins his opening statement Monday at the trial of Joseph H. Belstadt for the 1993 death of Mandy Steingasser, 17, of North Tonawanda. Belstadt is the masked man at the table.

Defense attorney Michelle Bergevin heads to the podium to begin her opening remarks on Oct. 25 on behalf of defendant Joseph H. Belstadt on trial for the 1993 death of Mandy Steingasser, 17, of North Tonawanda.

Monday was a day of milestones.

On an equally dark, damp and gloomy day 28 years ago, two men walking through Bond Lake Park in the Town of Lewiston made the grim discovery of the body of missing North Tonawanda teen Mandy Steingasser.

And it was 587 days from when the trial of Mandy's accused killer, Joseph Belstadt, ground to a halt in the face of the COVID-19 pandemic.

Two judges and a lead prosecutor later, a new set of Niagara County court jurors, seven women and five men, and six alternates, sat in a Falls courtroom listening to two very different versions of what evidence will unfold before them in what is expected to be a four-week trial to finally determine Belstadt's guilt or innocence.

Assistant Niagara County District Attorney John Granchelli promised the jurors that prosecutors would provide the answer to the question that has lingered for almost three decades: What happened to Mandy?

"Her friends have asked, 'What happened to her?' " Granchelli said. "Today you will her the evidence. Reasonable, rational, logical evidence."

Then, turning and pointing to Belstadst, Granchelli said, "The evidence proves this defendant murdered (Mandy)."

Granchelli noted that Steingasser's body had been found rolled down a small ravine, her pants unzipped and pulled down. Her skull fractured and her bra tied around her neck.

She had been out with friends on Saturday night, Sept. 18, 1993 and in the early morning hours of Sept. 19, witnesses said they saw her get into a Pontiac 6000, driven by Belstadt. Grancehlli said it was the last time Steingasser was seen alive.

Investigators have long believed that Belstadt drove Steingasser to Bond Lake Park, a location they say he used as a lover's lane. Once there, prosecutors say Belstadt attempted to have sex with Steingasser and when she resisted, her killed her.

"There were no eyewitnesses to this murder," Granchelli said. "And DNA was not the same forensic tool it is now."

But in late 2017, prosecutors said they reopened the investigation into Steingasser's murder. They took another look at evidence that had been collected, included a retesting of the biological evidence using newer and more sophisticated technologies.

That testing yielded two hairs, found in Belstadt’s car, and provided them with the forensic link they say they needed to charge him with Steingasser’s murder.

"Forensic evidence is not biased. It doesn't forget. It is not confused," Granchelli told the jurors. "The only reasonable, rational, logical conclusion is Mandy Steingasser had been in a fight for her life. She lost it."

Grabbing a microphone and pacing back and forth in front of the jury box, Bergevin said there was a "lack of credible evidence" in the prosecution's case.

"The only thing the evidence is going to show you is that Joe (Belstadt) gave Mandy Steingasser a ride. That's all," Bergevin said. "(Prosecutors) made a lot of promises. It's not evidence of anything."

The defense attorney said her client had been the "target" of police for 28 years, because he initially lied about what he did after picking-up Steingasser. Belstadt insists he drove her just a few blocks and then dropped her off.

"That one lie became the rock that started the avalanche," Bergevin said. "The last person she was with was the person who killed her or who watched her die. But she wasn't with Joe. The safest thing she did that night was get in the car with Joe."

And Bergevin told the jurors that the forensic evidence in the case would not answer all their questions.

Belstadt was arrested and charged with Steingasser's murder in April 2018. He faces a single count of second-degree murder.

If he is convicted on the murder charge, he could face a sentence of life in prison. He has pleaded not guilty to the charge and is free on $250,000 bail.

Lorraine Steingasser sobbed when she saw her daughter Mandy's picture flash up on two large projection screens in a Falls courtroom Tuesday.

The third day of Joseph Belstadt's murder trial got off to a stumbling start on Thursday.

For the first time, a pair of witnesses at Joseph Belstadt’s murder trial testified Friday that they watched Mandy Steingasser get into her ac…

The evidence that Niagara County prosecutors say led to the arrest of Joseph Belstadt, in the 28-year-old cold case murder of Mandy Steingasse…

After 11 days of arguments and testimony, a Niagara County Court jury will begin deliberating the fate of Joseph Belstadt sometime on Monday.

A Niagara County Court jury deliberated for just over 6 1/2 hours on Monday, but did not appear to be close to returning a verdict in the murd…

The foreman of a Niagara County Court jury uttered just one word, "Guilty."