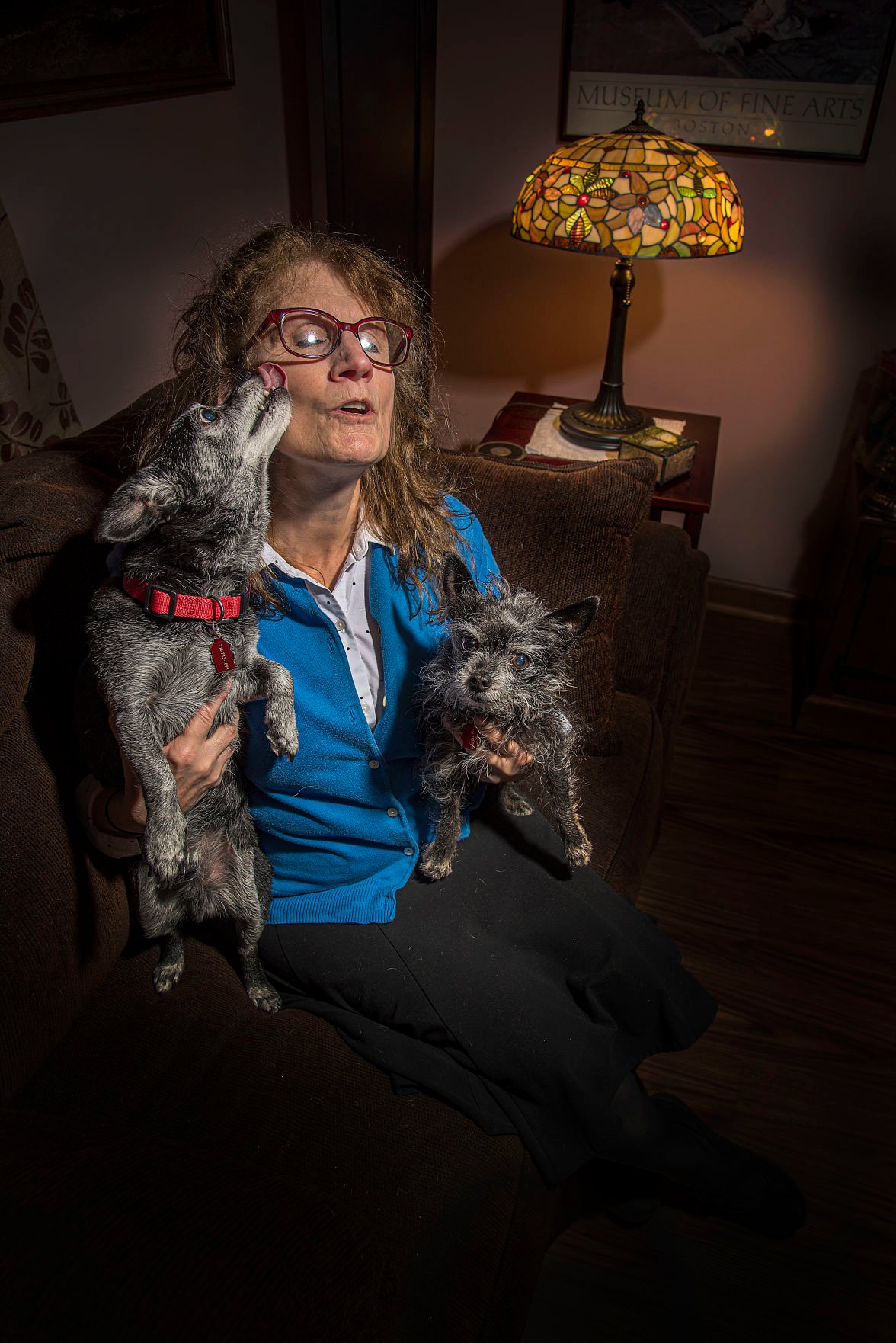 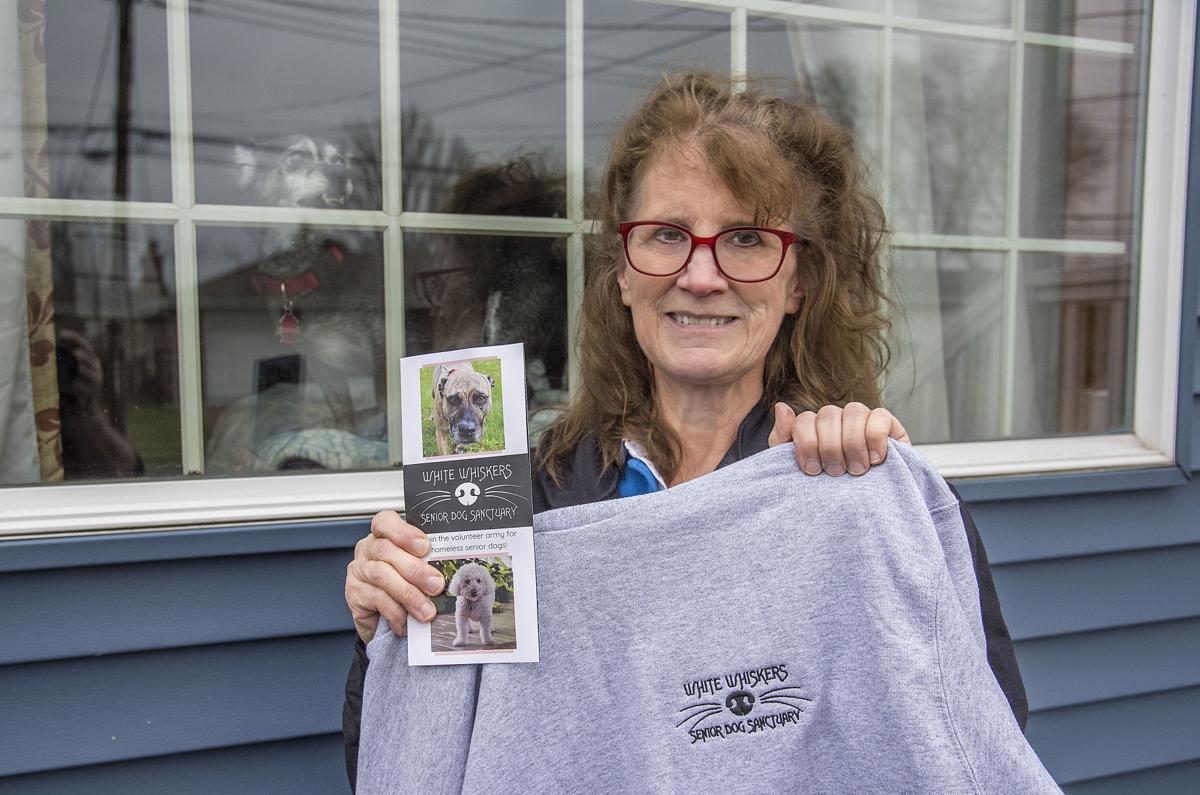 Polla Milligan has the ashes of 27 dogs tucked away in a cabinet in her home.

You might remember Polla from her days as a development director for the Niagara County SPCA. She left that job to follow a dream. But before I tell you about that dream, let me tell you a bit more about Polla.

Since the 1980s, when she returned to Western New York from California where she was working as a musician, she has made her home a refuge for old dogs.

The first dog walked up to her while she was sitting with a date on the patio at the Alleybar in Buffalo. He looked just like Benji, the dog from the movies, only not quite as well loved. “He was just a little straggly mutt,” she recalled. After trying for several weeks to find its owner, she kept him and named him Al, for Alleybar.

Then there was Abby. Polla found her at the Buffalo SPCA, where she sometimes goes to “just look.” She saw a little black and white dog shaking in the corner of a kennel. “She was this little poodley, curly dog and she was terrified, so I said, ‘Give me that one.’ “

Then, she adopted a third dog after a man came into the store where she was working and asked to hang a poster detailing his search for a new home for his 10-year-old standard poodle. His new wife wanted a smaller dog, he told Polla.

She bit back the snarky words she wanted to say about the new wife and took the black poodle, Samantha, into her home. “She was a wonderful dog,” Polla recalled. But Samantha only lived about a year.”

And then there was Johnson. Polla had gone into a local shelter to help a friend find a dog. “I walked by and there he was. He was really scruffy and really dirty and I said, ‘OK, number four.’”

She knew that four dogs was against city regulations, but “One of the reasons I bought my own home was so I could play my drums and have a million dogs.”

Everybody knows she can’t have a million dogs. Or can she?

It won’t just be a haven for old dogs; it will be a haven open to all who would benefit from interactions with dogs.

The all-volunteer endeavor will create the kind of place where children can come to practice their reading with the dogs, students studying for final exams can do so with a dog on their lap, seniors can come to visit dogs they are unable to keep, and those who have to go to the hospital can keep their dogs at the sanctuary until they are well. There will be no kennels, just plenty of couches. And there will be adoptions. In fact, Polla just started a Facebook page called White Whiskers Senior Dog Adoptables.

Those who are interested in joining her efforts can consider attending upcoming fundraisers, including a “Even Old Dogs Need Love Valentine’s Photo Event,” being held from 1 to 3 p.m. Feb. 1 at Creature Comforts Pet Resort, 205 Ensminger Road, Town of Tonawanda, in the former Erie County SPCA building. Pets of all ages are welcome to come and get their photos taken, and there will be baked goods and other items for sale as well as a raffle and door prize. Digital photos are $10.

Another fundraising event is a Zumbathon at the BAC for Women at 3157 Eggert Road, planned for 2 to 3:30 p.m. Feb. 8. Tickets are $15 pre-sale and $20 at the door. For tickets contact the Zumba instructor Mary Gibbons at 913-5829. There will be also basket raffle at the Zumbathon.

There will be many more fundraisers to come, fun-furry-filled events to raise money for the sanctuary. For more information, head to Facebook where Polla has several pages for those who want to help.

Dog hero that she is, Polla also founded the WNY Lost & Found Pets on Facebook, which helps people locate their lost critters and which has nearly 40,000 followers. The other page is called White Whiskers Senior Dog Sanctuary of WNY.

Some people might not understand Polla Milligan’s passion. But every dog lover knows that hanging with dogs is the best therapy for any ailment, whether mental, physical or spiritual. For those people, White Whiskers Senior Dog Sanctuary could become their happy place, as it surely will for the lucky dogs who get to live there.

“One of Us,” is a new column debuting today, which will regularly feature interesting and inspriational residents of Niagara and Orleans counties, written by Sunday Lifestyles Editor Michele DeLuca. She can be reached at 282-2311, ext. 2263 or via email at michele.deluca@niagara-gazette.com.