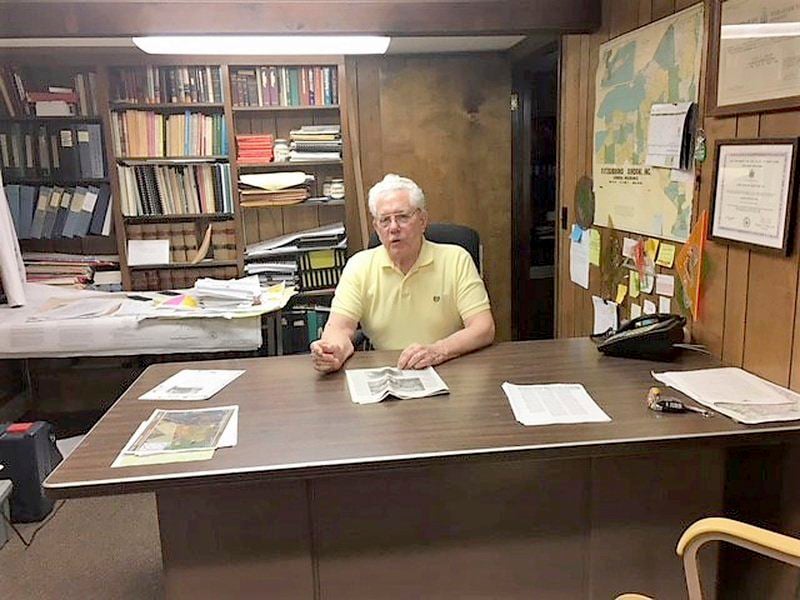 COURTESY JIM BOLESIn his office at McIntosh & McIntosh in 2018, John McIntosh Jr. reviewed information about the "lost" Lockport Cave that he and other local explorers tried in earnest to uncover in the 1970s. 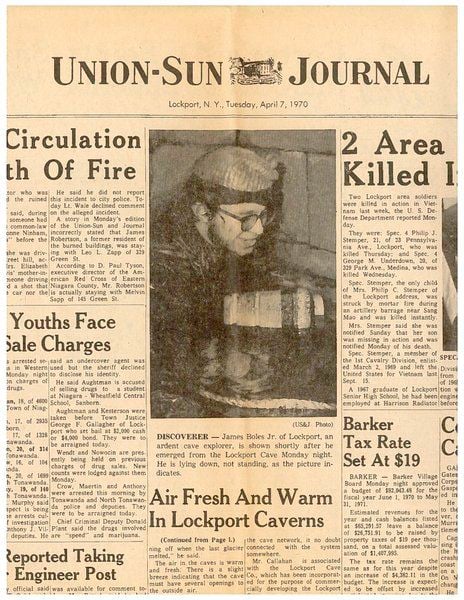 The April 7, 1970 edition of the Union-Sun & Journal looked in on the efforts of a local group coordinated by John McIntosh Jr. to explore the Lockport Cave. The explorer in the photo is Jim Boles, “shown shortly after he emerged from the Lockport Cave Monday night. He is lying down, not standing, as the picture indicates.”

COURTESY JIM BOLESIn his office at McIntosh & McIntosh in 2018, John McIntosh Jr. reviewed information about the "lost" Lockport Cave that he and other local explorers tried in earnest to uncover in the 1970s.

The April 7, 1970 edition of the Union-Sun & Journal looked in on the efforts of a local group coordinated by John McIntosh Jr. to explore the Lockport Cave. The explorer in the photo is Jim Boles, “shown shortly after he emerged from the Lockport Cave Monday night. He is lying down, not standing, as the picture indicates.”

When I first met all my fellow cave explorers, my mind was in the gutter.

Well, we were all in the gutter, 30 feet under the streets of Lockport, on the banks of the rerouted Eighteen Mile Creek, looking for the lost Lockport cave, once also known as The Devil's Cave.

This was where I met with John McIntosh, the leader of this underground gang.

It was 1970 and John had managed to bring together a renegade group of explorers who, before his leadership, were all going off on their own, down man hole covers, into sewers, digging in basements, tracking down any lead. John turned the explorers into a semi-functioning unit that set out in an organized fashion to find the cave. He was the adult in the cavern.

We would collect information from old newspaper accounts; Friday and Saturday nights we would visit the bars and hear the tall tales about the cave (a rough job but someone had to do it); and spend the next week tracking down the old stories. Some search parties started in a bar — and went out that night.

The police were alerted, the water and sewer departments were alarmed, and we were blamed for polluting escarpment springs. As young adventurers who had been exploring in and around Lockport since grade school, we tended to ignore the city's concerns. Of course we did not know anything about caves, but we were very eager.

It got so bad that John, heading off a problem with the city, sent a letter to the Mayor and Common Council in February 1970, stating the following:

John’s request included a restriction on who could explore and the amount and type of insurances they should present. The resolution based on John’s recommendations passed with 10 ayes.

John then formed an advisory council that brought together all the loose groups looking for the cave. All of Lockport was rooting for the explorers. After the city approved the search, the police seemed less interested in our activities and we boldly went everywhere with a new freedom.

We shortly discovered a few things. One, the easy way to get into the underground passages and sewers as we explored for the cave entrance was to go down manhole covers. Two, the residents of Lockport were interested and eager to help find the cave. They would contact the Union-Sun & Journal or the Niagara Falls Gazette, Lockport branch, with information that was passed on to the searchers. Both papers ran a series of articles about the lost cave. Often reporters and photographers would accompany us on our journeys.

The stories poured out nightly at the bars: back yard sink holes, the corner of the basement with an unfillable hole, secret rooms, tunnels that led to the cave — all near the suspected location. Because of the newspaper coverage, when we knocked on a door the residents knew about the search and let us in, very ready to tell their story. Homeowners opened their houses and allowed exploration of their property. Basements were dug up and water was pumped into holes under sinking foundations, all with welcoming arms.

John collected the information we learned and then went about the search for the cave in a very scientific manner. He also had some standing in the city and facilitated the permissions to explore and test for the cave. One of many professional firms John hired, the Pittsburg Testing Laboratory, did test borings; its report, titled “Test Borings Lockport Cave Company, Inc, West Side-Cave Street, Lockport New York,” is found in John’s cave files. Test bore holes were drilled strategically in suspected locations looking for a void — that void that would be the cave — and John documented it all for future explorers.

Within the past couple of years I had talked to John while writing articles for the Union-Sun & Journal, in his office at McIntosh & McIntosh surveyors, where he had well-organized files on the cave. He still had a belief that a substantial cave was under Lockport, and felt that future searches should focus more south. He also wondered about a rumored Lockport Gulf exit mentioned in early accounts of the cave. He suspected that explorers in the 70s could have missed the cave by just a few feet with their bore holes and believed new test instruments could help with future searches.

This winter as I reached out to John to discuss the lost cave anew, I discovered that he had become ill and unfortunately had passed. His daughter, Heather Noon, is going through his material and has loaned it to me for further research.

The contribution of John McIntosh Jr. (1939-2020) to the future reopening of the lost Lockport Cave was substantial. He provided the resources, organization and governmental knowledge for the group to forge ahead with the exploration and his records from the 1970s efforts have assisted future adventurers. He tried and added to the knowledge about what is under the ground in the city of Lockport. Prior to his efforts, nothing active had been done since 1886, when the cave entrance was closed.

From the many who are interested in the cave: Thank you, John.

It may be surprising to learn that serious efforts to find the cave quietly continue today. Stay tuned.

Jim Boles is a Lockport native with a keen interest in local history and cultural tourism. Contact him at jamesboles47@gmail.com .