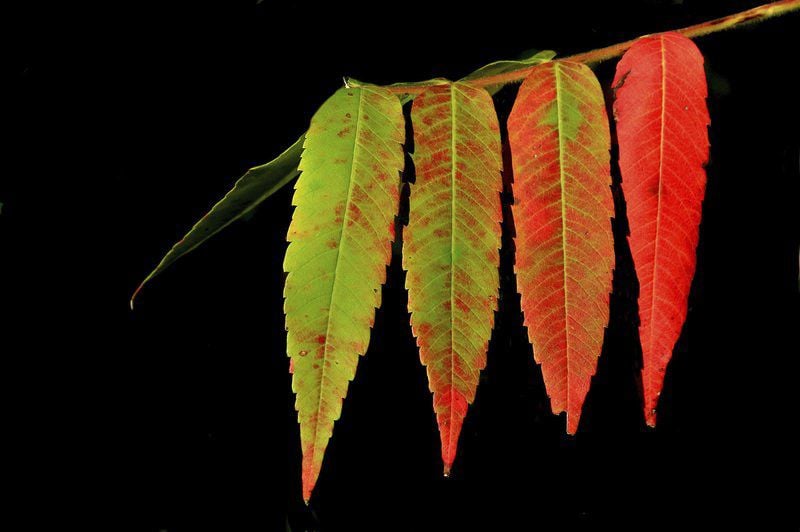 DOUGLAS H. DOMEDION/CONTRIBUTORThe process of color change on the leaves of a sumac. 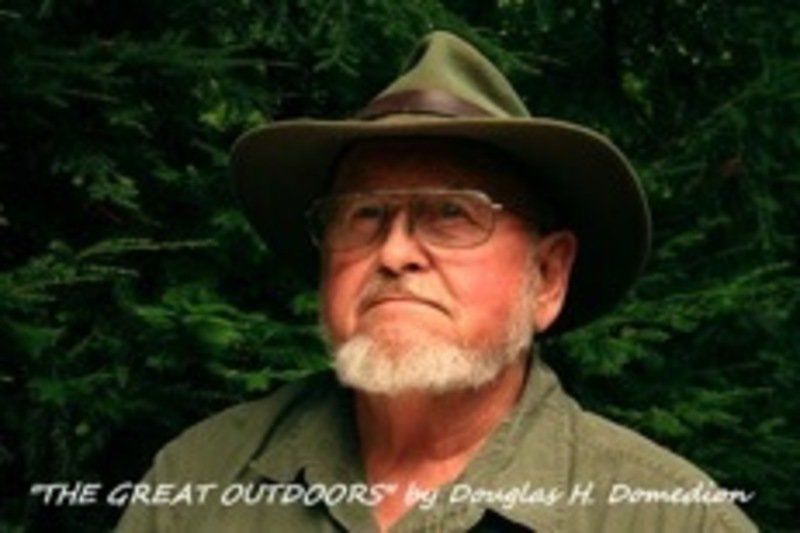 DOUGLAS H. DOMEDION/CONTRIBUTORThe process of color change on the leaves of a sumac.

Many folks think that Jack Frost is responsible for the color change in the fall but it is really a chemical change. In the summer, leaves are green because of the chlorophyll pigment in the leaf cells, which are part of the food making process. There are other colors in the leaves but these are masked by the large amount of green.

In the fall, changes in daylight length and temperatures stops this food processing. As the chlorophyll breaks down, the green color disappears and the other colors are then seen. Other chemical changes at this time may add other colors as well. Thus trees such as maples give beautiful reds, oranges and yellows, while others like aspen, hickory and birch will only show yellow. Most oaks are usually brownish and beech turns golden bronze.

Warm days and cool nights (under 45 degrees) favors red colors. The degree of color change may vary from tree to tree or even on different sides of a single tree because of the amount of sunlight that is received. Colors may also vary on the same tree from year to year depending on the amount of rainfall. The most brilliant colors come from a dry summer. Extremely wet weather in the early fall can cause a rather drab coloration.

Leaves fall from the twigs eventually because a layer of cells forms at the base of the leaf stalk and gradually severs the tissues that support the leaf. This is why sometimes we will see many leaves falling at one time when there is hardly any wind blowing. The woods around my house are mostly Sugar Maple, whose leaves usually turn yellow. One year as I looked out the window the leaves were falling like big yellow snowflakes, but there was hardly any wind.

With fall and color change comes another greatly anticipated outdoor activity, hunting season. This is an important part of the year for many folks especially in our area. Some folks who don't hunt kinda look down on hunting but it is a very important sport for many, providing unique outdoor experiences. There are many benefits to those who hunt, like a renewed connection with nature, time to bond with others who enjoy the great outdoors, provision of good chemical-free meat, a chance to renew our primitive skills and help manage wildlife populations, and just plain relaxation.

Public opinion about hunting, fishing, sport shooting and trapping has been monitored since 1995 by Responsive Management. Recently the U.S. Fish and Wildlife Service has provided support for this monitoring through a grant. Interesting figures come from these yearly surveys, like the fact that 80% of Americans approve of hunting. That has actually increased from 73% in 1995. Fishing has a 93% approval rate from the public and support for recreation shooting runs about 81%.

Trapping is more controversial than other outdoor recreational activities in this study, and that is unfortunate as trapping plays an important part in areas of wildlife management that hunting doesn't cover. Overpopulation of beavers, coyotes, raccoons (rabies outbreaks) and muskrats can cause environmental problems for other wildlife species. Now that fishers have been moving into our area,  I can foresee the problems they will cause. We don't have the trappers we once did and that can be a concern for wildlife management also.

As mentioned last week, the early resident (September) goose season opened Sept. 1 and ended Sept. 25 . The regular goose season opens Nov. 2 and runs until Dec. 1 in the West Central zone, which includes Orleans, Genesee and counties east of them. In the South zone, which includes Niagara, Erie, Wyoming and counties south of them, the regular season runs Oct. 26 to Jan. 13.

The only other seasons open right now are for squirrel, from Sept. 1 to Feb. 24, and crows from Sept 1 to March 31, with hunting allowed only on Mondays, Fridays, Saturdays and Sundays. (I have a short story to tell you someday about an illegal crow hunt I was on many years ago!)

Tune in next week for the rest of the hunting and trapping seasons.

Euphemia "Effie" C. Wood, age 91 of Lewiston, wife of the late Harry Wood, entered into rest on July 9th, 2020 at her home under the care of Niagara Hospice. Effie was born on November 7th, 1928 in Larbert, Stirlingshire, Scotland, the daughter of the late James and Christina (Laing) Clark. …